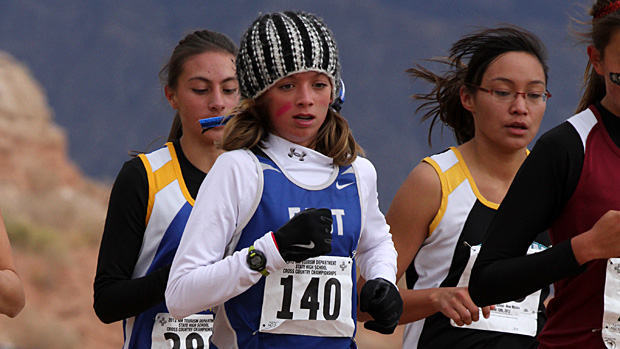 Addison Rauch qualifies as one of the most bundled up contestants at this year's state meet, but dreams of contending for a team state title next fall should make the winter at East Mountain a little warmer. Photo by Alan Versaw.

Which teams are likely to be the face of New Mexico cross country 2013? In this series (four, in all), we'll attempt to answer that question from what we learned this year.

Cimarron ran away with the 2012 state title. That trophy now sits tucked away in a suitable place along the sunset shadow of the Sangre de Cristos. Cimarrron High School owns the first-ever 1A state cross country trophy for the state of New Mexico. And, you know what? That title isn't likely to be going anywhere next year. At least the top four, and maybe more than that, are back for Cimarron next year.

Runner-up and third-place Tse Yi Gai and Jemez Valley both have considerable talent returning to their respective folds next year as well, so it won't be as if Cimarron can simply cash in their first-place finish this year for a matching one next year.

Note: The analysis for both 1A boys and 1A girls is somewhat compromised by the fact that there are proportionately more missing years of graduation in the rankings of athletes for this classification than for other classifications.

Individual champion Trevor Armijo of Jemez Valley was a freshman this fall. That could bode well for a long and productive career of high school cross country.

Valene Madalena, a sophomore this fall, was the runaway winner of the 1A girls state race. At the moment, she has to figure at the top of the list for the same honor next fall. As she was at the state meet, Desert Academy sophomore Taylor Bacon is the only one close at all in the rankings.

And, in a race with only four teams (there are a bunch of folks hoping for bigger numbers next fall now that this 1A thing is off the ground), the 20-point margin of victory for Jemez Valley is a pretty big deal. Jemez Valley looks like a serious contender to repeat the title again next fall. If, however, Desert Academy can extend their depth to four or five runners, maybe there will be two teams in green battling it out for next year's team title.

It's worth reminding ourselves, however, that 1A dynasties are not yet established. With the new classification, there are several schools doing their first serious spreading of the wings in cross country. That, in turn, implies that it shouldn't be thought too surprising if a couple of schools within the ranks show marked improvement next year over this.

How good will Laguna-Acoma be next year? Is it relevant that they graduate Patrick Keyope, Jacob Riley, Cameron Riley, and Chris Salvador?

The answer to the latter question is, well, yes and no. It's always relevant when you graduate talent like that. But, there's an old adage in the coaching community that tradition never graduates. A well-coached team has a way of being good from one year to the next regardless of who graduates. So, figure that Isaiah Kelsey and Augustus Cuch are leading a pretty good team at L-A next year.

As good as this year's team? That's hard to say; it's way too soon to see how good Laguna-Acoma could be next year. Just don't get hopeful that the Hawks are going away any time soon.

By the way, it's not just Laguna-Acoma that loses some top-end talent off their roster to graduation. Names like Alonzo Chavez, Eric Eridon, and Mckenz Leekya will also be gone--leaving spaces to be filled by names not quite as familiar to us--yet.

Team-wise, Navajo Prep, who finished third this year has some cross country tradition and all of their top guys coming back next year. That more or less makes them an instant team of interest. Zuni always seems to have some fledglings on the nest ready to become full-fledged Thunderbirds. Ty Pinto figures to be taking over at the front of the pack at Zuni. Kyle Evaldson figures to lead a Santa Fe Prep squad with no small potential for next year's season.

My hunch is that it will be a good deal closer next year than this, but I'm not ready to kick Laguna-Acoma out of the driver's seat yet.

Individually, Leandrew Daily (Navajo Prep) and Isaiah Kelsey bring back the top two returning finishes from state, but look for the list of candidates to change a lot between now and next November due, at least in part, to the massive exodus of graduating seniors from this year's group of leaders.

This year, it came down to a very tight battle between East Mountain, Navajo Prep, and Rehoboth Christian. Zuni wasn't far out of the mix, either. There's no obvious reason why any or all of these teams couldn't be back in the mix again next year.

But each of these teams should be expecting company if they are back next year. Figure Bosque to have Jackie Katzman and both Kelley twins back. That gives the Bobcats a little more bite than they had at this year's state meet.

And, if you recall anything at all about a former coaching stint for Tim Host, you are already figuring ATC as a team you don't want to fall asleep on--it takes a little bit of time to build a cross country powerhouse, even if you do come to the table with some serious coaching credentials. And, make no mistake about it, the ATC team was a very young team, and very thin on cross country experience, this fall. That will not be nearly as much the case next fall.

Navajo Prep won this year and has the talent to be in the hunt again next year, regardless of whether or not Amber Manuelito is back next fall (I do not have a year of graduation on record for her). Muriel Waukazoo, who very nearly won this year's individual title, should be back.

Rehoboth Christian brings key contributors Jordan Ide and Shannon Begay back to the fold, plus that little extra bit of confidence that a first trip to the podium (or at least the first trip in a good, long while) will give you.

I'm lacking some years of graduation for the East Mountain roster, but I'm pretty sure Addison Rauch, Talynn Turner, and Amira Cunningham are all back. EM should be a very dangerous team next fall, as if they weren't dangerous enough this fall. They very much had the look of a young team just beginning to discover what they were capable of late in the season.

Zuni will have depth and tradition on their side. They will need a front runner or two to bolster their presence among the classification's leaders to make a serious run at the team title.

2A girls just might turn out to be the best team contest of the state meet once again next fall. There are all kinds of reasons to be optimistic about the prospects for this grouping.

Individually, this one seems just as wide open as the team title chase. Cassie C de Baca of Pecos should be back to defend her title, but there will be potential usurpers with names like Katzman, Waukazoo, Ide, Kelly, Turner, and Rauch to deal with. If Annoesika Laughlin of Navajo Pine is back next year, add her to that list as well.
Tweets by