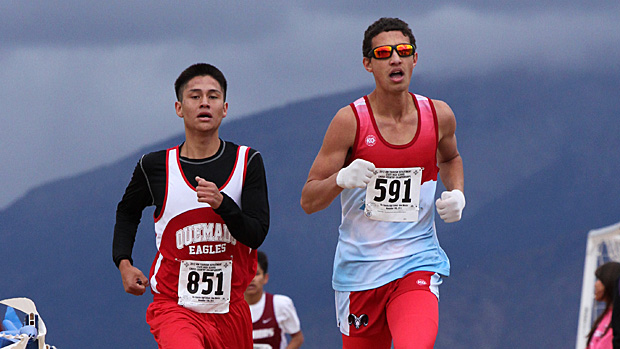 Danny Yazzie and Jacob Subratie just might find themselves going at each other hard for a state medal once again this year. Photo by Alan Versaw.

We'll alter the pattern here because 1A is such a small classification. We'll look at the boys and girls in the same article and start with only the top five finishers from last year's state race.

1. Trevor Armijo, Jemez Valley - When the returning champion from last year is back and was a freshman last year, you give him a lot of leeway even if he didn't run track in the spring. Armijo should be on your short list of favorites, but it's not a done deal by any means.

2. Jacob Subratie, Cimmaron - The last two seasons have been very good to Cimarron. Once a team learns how to win, it's often difficult to get them out of the habit (e.g., Fort Sumner), and some of that sense of confidence just may have spilled over into Subratie's personal race. Subratie tended to go shorter distances in track, but a 2:00.26 in the state 800 suggests he will be at least as good in cross country this fall as he was last fall.

3. Danny Yazzie, Quemado - Yazzie backed up his third-place finish at state cross country with a 4:45 and second in the state 1600 in the spring. Yazzie should be highly motivated for his senior season of cross country.

4. Tristan Platero, To'Hajiilee - It may be a matter of missing track results, but I've not seen any times for Platero since last fall's state cross country meet. That makes projecting anything for the sophomore-to-be a little bit of a reach. Hopefully, we'll see some early cross country results this fall and get a good idea where his progression has taken him.

5. Henry Sime, Cimarron - In addition to finishing fifth last fall in cross country, Sime won the 1A 800 and 1600 at state track. He also took third in the triple jump, but it's a little difficult to say what implications that might have for cross country unless there are a ton of puddles on the state course this fall. Regardless, Sime's track season points to the possibility of big things in cross country this fall.

With all five top finishers figuring to come back there isn't a lot of room at the top of the order, but there do seem to be a couple of possibilities worth considering even at this early stage.

Larramy Roberts (Logan) and Garrison Eddie (Pine Hill) went 1-2 in the state 3200 this spring. Neither ran in the state meet last fall, but either would have to be considered a contender on the basis of their track seasons if they do run cross country this fall.

Thomas Gallegos of Cimarron finished third in the state 3200 and ninth in state cross country last fall. His 3200 time suggests he has moved ahead of his cross country pace from last fall and so could easily be considered a contender for a top five finish.

1. Valene Madalena, Jemez Valley - Madalena beat out a merciless pace at last year's state meet and never let anyone else get close. She appears to do better the longer the race goes, finishing sixth in the state 1600 and second in the state 3200. She comes into her junior season as the person to beat.

2. Taylor Bacon, Desert Academy - Bacon, last year's runner-up, turned the tables on Madalena in track, winning the 3200 by a margin of just over nine seconds. For good measure, Bacon also won the 1600 in 5:35. Cross country is a different distance, of course, but Bacon definitely figures to be in the hunt.

3. Jade Altheide, Jemez Valley - Altheide, a sophomore this fall, comes off a track season where she steered clear of running distance, focusing instead on the long jump and high jump. Madalena and Bacon may be out of range for Altheide this fall, but she still figures to be a big contributor as Jemez Valley seeks a repeat state title.

4. Marilyn Werito, Tse Yi Gai - Werito had best times of 6:22 and 13:34 in track season this spring. That's likely to keep her in the hunt for a top five position again this fall, but keeps her, at least for now, well off the pace of Madalena and Bacon.

Although there is only one spot in the top five opened from graduation, there may be more than one competitor ready to move up.

Tessa Nall (Floyd) and Autumn McMath (Ft. Sumner) showed considerable distance promise this spring, but at this point neither school has cross country. Nall and McMath point to interesting possibilities at this point, but we'll have to wait and see if anything comes of those possibilities.

Amy Gonzales of Cimarron finished fifth in the state 3200 at 13:01. She was seventh in state cross country last fall, but the 13:01 time strongly indicates she has leapfrogged a few of those who were ahead of her last fall.

Dayna Guerro of Alamo Navajo is another intriguing possibility. She was sixth at state cross country last fall, but was fourth in the 800 and second in the 1600 (5:44) this spring. In addition, Guerro has continued her season into the summer, to include a 5:29 1500 at the USATF Junior Olympic national meet. It won't be at all easy keeping Guerro out of a top five position this fall.