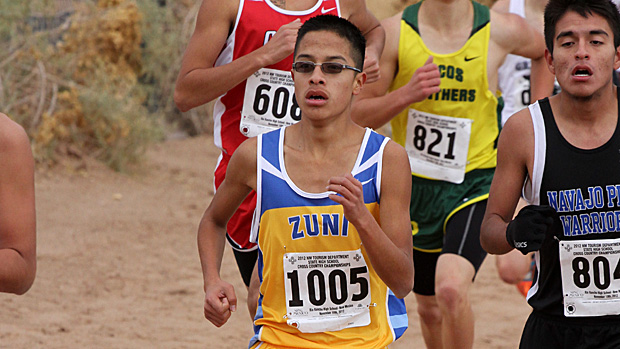 Tyano Pinto figures to be one of several talented young runners looking to fill a void at the top of 2A left by graduation. Photo by Alan Versaw.

More so than New Mexico's other classifications, 2A boys will see some new blood this fall. Last year's top ranks were seriously depleted by graduation.

7. Leandrew Daily, Navajo Prep - The top returning runner from state cross country 2012 went shorter in track, finishing 13th in the 2A state 800 and making state in the 400 but not qualifying for finals in that event.

8. Isaiah Kelsey, Laguna-Acoma - Kelsey is the top returning member of the Laguna-Acoma crew that devastated anything in their path last fall. Kelsey's 10:14 for seventh in the state 3200 was the second-best mark among returning runners.

10. Christopher Salvador, Laguna-Acoma - Graduated and slated to run for New Mexico Highlands in the fall

With only two of the top 10 from last fall returning, there's obviously a lot of room for new blood to move into the ranks. Here are some of the top contenders to fill the void:

Augustus Cuch, Laguna-Acoma - You can run, but you can't hide from the depth of Laguna-Acoma cross country. Cuch owns the top mark from the state meet among returning 3200 runners at 10:10.

Jimmy Buchanan, Santa Fe Prep - Buchanan was inexplicably way back at 46th at last fall's state meet, but that was not the overall story of his season. And, a 10:15 at state track underscores the fact that he will be among those vying for individual honors this fall.

Isaiah Rodarte, Penasco - Only a freshman last school year, Rodarte has been quick about making an impact. Rodarte ran 12th in state cross country last fall and 13th in the state 3200 (10:30) in the spring. With all of the talent moving out in front of him, it looks to be a top ten kind of year looming.

Tyano Pinto, Zuni - Pinto looks to take over the mantle of lead runner for Zuni this fall. He was 14th in last fall's state cross country meet and 16th (10:43) in the state 3200 this spring.