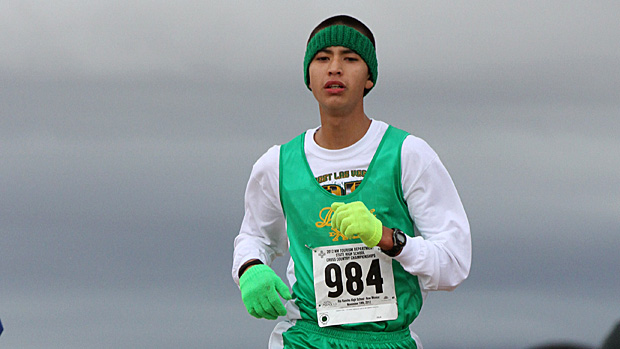 This fall, it could be the competition that's turning all shades of green if Moises Coca continues to make the kind of progress he's been making the last nine months. Photo by Alan Versaw.

Last fall, Jereme Santistevan ran away with the 3A boys title. Little about Santistevan's status seems to have changed in the last nine months, but there could still be some very interesting things going on in 3A boys.

1. Jereme Santistevan, Pojoaque Valley - Not only did Santistevan win last fall's state cross country race by 24 seconds, he was the only 3A boy to run under 10:00 at the state track meet in the 3200. Second place graduated. The space between Santistevan and the pack appears to be considerable.

3. Donevan Gravelle, Taos - Was third in state cross country but ended up seventh in the state 3200. May need to make up some ground again or perhaps cross country is simply Gravelle's favored sport.

4. Moises Coca, West Las Vegas - Coca has given us a lot to think about in the last nine months. He finished second in the 3A 1600, fifth in the 3200, and has put in a busy, and productive, summer with USATF track. If he still has his wheels under him this fall, he should be considerably stronger than last fall.

5. Arlo Enoah, Wingate - At least in the results I received, Enoah was not heard from during track season. That means he enters the 2013 cross country season surrounded by a little bit of mystery.

7. Patrick Wood, Hope Christian - Wood more or less held the place he earned in state cross country in state track at both 1600 and 3200 meters. If there's a big movement this fall it would be likely be indicative of a summer well spent.

8. Troy Pacheco, St. Michael's - Pacheco ran 10:24 for the 3200 at his district meet and then met up with some sort of wall at state, running 11:00 and finishing tenth. Since it's difficult to run better than you are, we'll take his district result as more indicative of where he is. The 10:24 seems consistent with his cross country result from last fall, so--like Wood--if we see a big step up this fall, our first guess will be a nice summer of training.

With four of last year's top ten graduating, there no dearth of room at the top. Here's a quick look at some of the young men poised to make a move up.

Shawvan Levi, Shiprock - Levi didn't have the kind of state cross country meet his season indicated last fall. But, he was back this spring and finished third in the state 3200 with a time of 10:04. That's well ahead of many who placed in last year's top ten, indicating it won't be easy to keep the Shiprock junior out of this year's top ten.

Ilan Serrano, Bloomfield -  Serrano doesn't show in last year's cross country results, but if he has a change of heart this fall and runs cross country, his 4:37 at state track in the 1600 says he could be a very productive Bobcat.

Mateo Vigil, Taos - Vigil finished 27th at last fall's state cross country meet, but his races this spring indicate better than that. He didn't make the state track, but was close to making it nevertheless. With Taos appearing to be in position to have a strong showing this fall, there's extra incentive for Vigil to continue elevating his race.

Jacob Torres, Peter Siminski, and Matt Weinstein, Hope Christian - These guys were young last fall (10th, 9th, and 8th grades). They didn't make too much of an impact in cross country last fall, but they showed some progress in track this spring. All were close to 11 minutes for 3200 meters. Like Mateo Vigil at Taos, there should be some extra incentive on the table for these guys since Hope Christian is among the teams that have to be considered contenders for this fall.