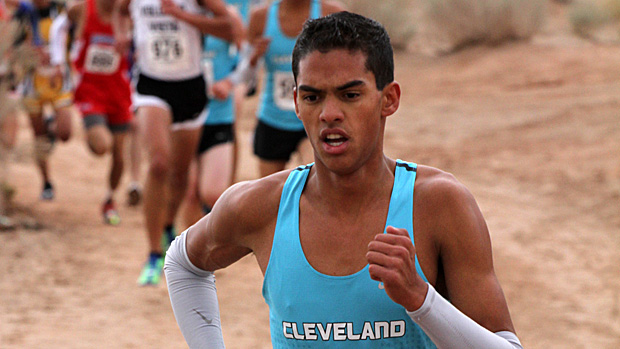 We've already heard a great deal from Aaron Flores, but Jared Mayoral may be another Cleveland runner with an excellent shot at an individual state title this fall. Photo by Alan Versaw.

The interest will be high, and the interest should be high, in the outcome of this fall's 5A boys individual race. After three years of Luis Martinez dominating this thing, there's a vacancy on the throne and several guys looking to position themselves for a great season.

As is the custom, we'll start with the top 10 from last year:

1. Luis Martinez, Cleveland - Graduated and on his way to Oklahoma State University

2. Aaron Flores, Cleveland - Flores is the heir apparent to the leadership role on the Cleveland team and a bona fide member of the shortest list of guys who should be considered a favorite to win it all this fall. Flores' 9:42 3200 time from this spring ranks first among returning 5A runners.

4. Preston Charlie, Rio Rancho - Graduated and making tracks for Durango, Colorado, where he will run for Fort Lewis College.

5. Jared Mayoral, Cleveland - For those keeping track, Mayoral's 9:44 3200 was the second-best this spring among returning 5A cross country types. The proximity of Mayoral's times with those of teammate Aaron Flores points to the possibility of a little extra synergy working in favor of these two this fall.

6. Taylor Potter, Eldorado - Potter figures to lead the Eagles as a senior after a very successful junior year. In addition to finishing sixth at last fall's state cross country meet, Potter took fifth in the state 1600 this spring. PRs of 4:27 and 9:52 at the track distances.

8. Preston Panana, Cleveland - The third Cleveland member of last year's top ten to find a place on the list of returning athletes for 2013. Panana, however, was heard from very little during track season, clocking a 10:37 at Los Alamos for the lone mark recorded on the MileSplit database for the spring track season. Thus, Panana enters this fall's season as something of a mystery. We know from last fall what he's capable of doing, but we don't know what the progression since last fall looks like.

That leaves only four of last year's top ten coming back. Of special interest is the fact that three of those four wear electric blue. But, these four won't have things all to themselves at the front of the pack. Here are a few more to think about:

Chris Harlow, Cibola - That 9:46 from track season kind of gets your attention. Harlow was an inauspicious 24th at last year's state cross country meet but the junior-to-be may have made more of his off-season than anyone else in 5A.

Chris Sharp, Hobbs - If you were hopeful that Pineda's graduation would spell the end of worrying about the runners from Hobbs, you were wrong. Chris Sharp is rapidly closing in on being all that Pineda was and the 9:57 he ran this spring (albeit at lower altitude) suggests the Hobbs senior could have his eyes set on something higher than #45 this fall.

Andres Franco, Albuquerque - Franco is yet another who, by all rights, should be placing considerably higher this fall than he did last fall. Franco's calling card was a 9:57 in the 5A 3200.

Frankie Scorfina, Cibola - Like the Cleveland guys, the Cibola guys should be getting a little extra boost from the synergy factor this fall. Scorfina is yet another sub-10 3200 from this spring and, at 15th in state last fall, he has already established himself as a cross country threat.

Justin Kerstetter, Manzano - Third at state in the 1600 qualifies you for some extra consideration as a cross country threat in the fall. Kerstetter will be looking to advance on his 22nd-place cross country finish from last fall.

This is the top tier of candidates to finish in the top ten this fall. There are, of course, several more close behind (not to mention that even if all of the returners mentioned in this article place in the top ten there is still one top ten slot remaining to be filled). The distance between the top tier and the second tier is not so great that one good summer of training could not change a lot of assumptions.