Los Alamos is in a league of their own

At this point, we can only really say that Los Alamos has been "that" team all season long and really for the past couple of seasons have shown no sign of diminishing their hold on New Mexico cross country. They are a team with no definitive scoring leader as all of these ladies have proven to be someone who can win the individual state title on any given day. Two-time defending 4A champion Norissa Valdez can never be counted out of taking over the show while Sophie Chadwick was the 2019 state runner-up and they return Hailey Mcdowell and Emma Montoya from this spring championship team. The newcomers to the varsity ranks for the Hilltoppers have led the way with Delaney Ulrich and Kelly Wetteland currently the #1 and #2 among 4A girls rankings. Yes, that all sounds like the perfect recipe for yet another state title in 2021 but can you ever really mention title contenders without ABQ Academy. The Hilltoppers were so good this past spring that sometimes we tend to overlook the Chargers that were right behind them in 2nd with 35 points. They are led by Emma Patton and little sister Katie Patton. Emma was the state runner-up in March and will surely make it a close finish this time around as well. They return Sara Perez and Addie Siembieda from that team and additions like Addison Julian, Anna Hastings, and Emma Mclaughlin put them right back into the trophy discussion.  St. Pius will once again be looking to land on the podium but they may run into a roadblock with Belen team that returns everyone from their scoring five last spring. Trista Cordova, Gracie Baca, and Maricia Marquez lead the Sartans against the young Belen Eagles led by Lisette Sanchez. 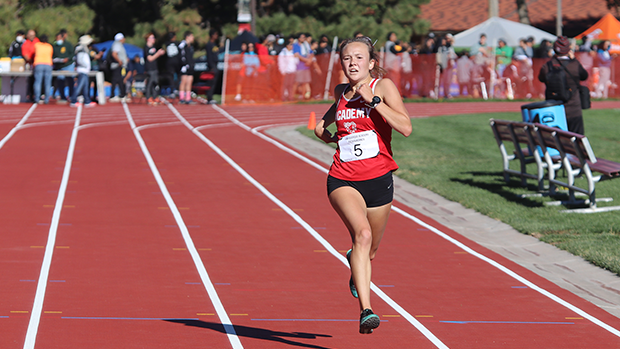 This is a real toss-up among 4A girls because they truly have a deep field of front-running stars that could pull off the win. Norissa Valdez is the two-time defending champ and despite having been relatively quiet this season she surely has the potential to once again be crowned top of 4A. The Hilltoppers possess an entire scoring five that could handle the task as well including Mcdowell, Chadwick, Montoya, Wetteland, and Ulrich. Emma Patton has been electric in her performances this season and will be competing on her own course. Kirtland Central's Aisha Ramone won the Academy Extravaganza B race in ease and has never finished lower than 8th at the state meet. We have talked about the youngster Lisette Sanchez still only a freshman but already has all-state performance on her resume. Lovington's Vanessa Gallegos will also be in the mix coming off a win in the Academy Extravaganza C race and a state title in the 3200m in late June. Whoever wins this race will have given their all to overcome a field as stacked as this 4A girls race is on Saturday.