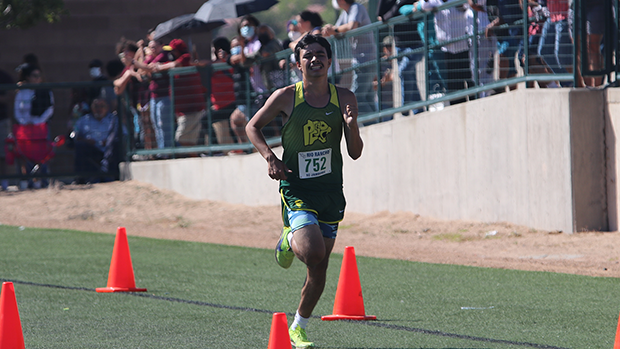 Pecos looks to reclaim the throne among A/2A

The first race to kick off the 2021 Western Sky Community Care New Mexico State Cross Country Championships is A/2A boys that could look entirely different from the spring championship this past March. In early spring it was Cloudcroft, Quemado, and Cimarron among the podium finishers, fast forward to the first week of November to find a new group of contenders etching their way to the top of the classification. Pecos for the past few seasons even prior to the Covid pandemic was in a dormant rebuild that has seen a hiatus since their three straight championship titles from 2015-2017. Even only a few months prior they were a team not quite ready for the spotlight as they would eventually finish 6th with 79 points with factors that included a four-athlete scored per team race.  Pecos has already captured huge wins this season with claiming the Varsity Race at Rio Rancho Jamboree in late September and most recently a win in the Academy Extravaganza C race over 3A and 4A competition.  Looking at other challengers heading into this meet the team closest to the Panthers appears to be Oak Grove Classical Academy. They have been a team just a step behind all season long but still poise a threat when it comes to class A/2A. Hagerman will also be in the mix to land on the podium coming off a 4th place performance in the spring championship meet led by Gerardo Mendoza (17:31). Penasco returns the individual champion from March but also will be on the hunt to land a surprising podium team spot if they can compete with the likes of Hagerman or Oak Grove. Also, an unknown factor will be our first look at Laguna Acoma among the A/2A classification since moving down prior to the 2020 season. Looking to enter an exclusive club of multi-state champion winners will be Penasco senior Gilbert Valdez. Valdez is undefeated thus far in the season and has for the most part been unbeatable in 2021 including his most recent state titles in the 800m and 1600m. He will find the biggest challenge coming from Cloudcroft's Max Preslar who finished runner-up last time they met up for the state meet.  Maxwell's Tristan Pierce won the varsity boys race at Rio Rancho Jamboree and appears to still be adjusting to the cross country scene after missing out on the spring season. Other runners that can't be left out of the discussion include ATC's Joey Gurule and Quemado's Noah Bugayong who both will be in the top five discussions entering this race.