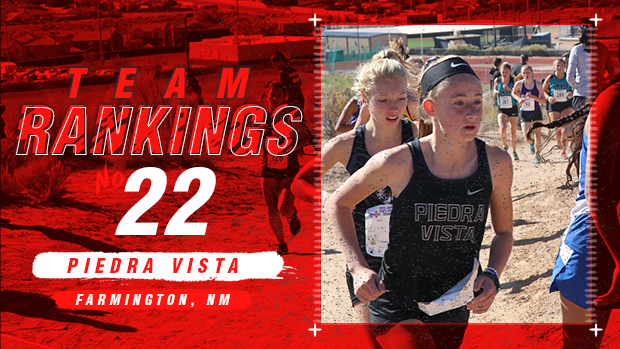 The New Mexico Cross Country Countdown breaks down the top 25 New Mexico boys and girls teams returning this fall. These rankings will include projected top runners and weighing how each team may do in their respective districts and state competitions. Changes to class alignments and adaptions to state championship format have been taken into consideration. These rankings are based on past two seasons of performances and do not include teams that did not compete last year due to a lack of athletes and team information. All top returning runners are only projections and may include athletes no longer on the team due to transfer or out-of-state relocation.

Similar to the boys' team, the girls of Piedra Vista are in a unique position of making a return to the state meet as they return a solid group to build upon. Led by sophomores Riley Wilson and Nicole Pierce who both represented the Panthers this past spring at state with 45th and 54th place finishes. Juniors Makenzie Yazzie, Lauren Harris, and Naomi Wagoner round out the projected top five. Both Yazzie and Harris have had state championship experience in the past and no other team in the state returns as many varsity runners. Residing in district 2-5A hasn't made it an easy path but the competition from the past few years since the alignment could prove to pay off in the coming seasons. To think that this squad can possibly have the next two seasons together and see themselves moving up the ladder in terms of competition. At the moment they stand as a possible 3rd team qualifier from one of the most challenging districts in New Mexico but don't be surprised to see the Panthers in contention for a trophy this fall.