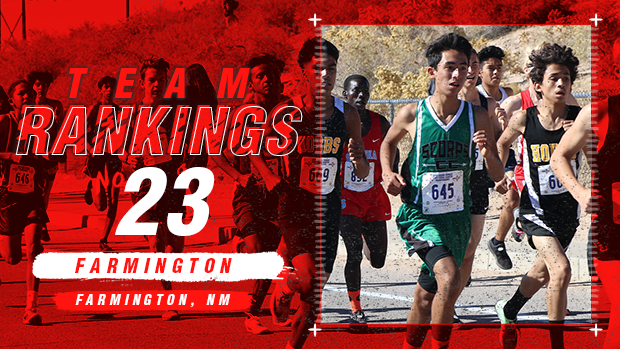 The New Mexico Cross Country Countdown breaks down the top 25 New Mexico boys and girls teams returning this fall. These rankings will include projected top runners and weighing how each team may do in their respective districts and state competitions. Changes to class alignments and adaptions to state championship format have been taken into consideration. These rankings are based on past two seasons of performances and do not include teams that did not compete last year due to a lack of athletes and team information. All top returning runners are only projections and may include athletes no longer on the team due to transfer or out-of-state relocation.

Coming in just a couple of spots ahead of their cross-town rival, Farmington appears to be bringing back a team worthy of a district 2-5A state qualifying position. The Scorpions also return three runners from the 2021 spring season with the only senior, Elijah Flores getting some state experience from his 58th place finish in the 2019 5A meet. Palmer Bentley and Trey Jones make out the rest of the returners as a team that has plenty of room for improvement and will still need to find more depth if they want a chance at making it out of district 2-5A that includes Eldorado, La Cueva, and Sandia among them. To consider them in the top ten among 5A schools may be a little premature but they are one of the few schools bringing back athletes from last season's reduced rosters. Keep the Scorpions in mind when we approach district meets to see if they contend for state qualifications.