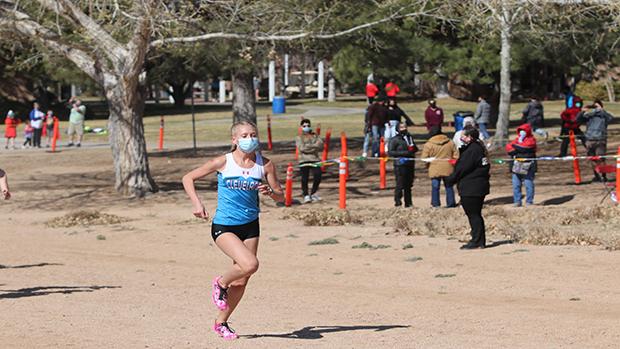 Every runner will count in 5A girls race

Whoever thought Eldorado may have shown some decline after graduations last year could put that to rest as the Eagles are back to defend against the likes of Cleveland, La Cueva, and Rio Rancho.  La Cueva managed to land some key additions over the break to make them a state contender while Sue Cleveland returns only Leah Futey from the previous squad but finds themselves once again on the big stage. Rio Rancho returns no one from last year's scoring five and yet was able to take down the Storm at district with their scoring runners going finishing 2nd -6th. We will see how this may affect competing at Albuquerque Academy. An unknown team with Los Lunas moving up in classification from 4A will be interesting as they will go toe-to-toe with some southern New Mexico schools in, Hobbs, Onate, and Clovis that have been on the rise in recent years. (edit) How could we forget about Alamogordo girls who return every girl from the previous season and were one of our aforementioned teams to watch heading into 2020. the How about a dark horse in Albuquerque High which may have lost Emily Schoellkopf to graduation but returns a talented group that's been around for awhile including Vivian Micono who placed 11th for the Bulldogs in 2018.

Should it even be said at this point but Leah Futey has seemingly been in a league of her own lately. It feels like long ago that she was dueling Eldorado's Jasmine Turtle-Morales every meet pushing each other along the way. 2021 has been a lot of solo running for the defending 5A champion as she enters this meet averaging a finishing time nearly a minute less than her competition. Elsewhere, Eldorado's new #1 Laurynn Sisneros ran to perfection at the district meet, and returners as the second-highest runner as La Cueva's Brynn Esplin departed the state to compete in Utah. In fact, there has been so much shuffle among 5A girls that the rest of the field remains a mystery in terms of what they may be capable of. Alamogordo's Janae Shaklee returns from a 15th place finish and will be vital for the Tiger's success. Sisneros teammate Madeline Hwang could be in the mix along with La Cueva's Kendall Downing. Albuquerque's got Vivian Micono who did not compete in 2019 that may be up for a top ten finish as well as Ava Straton, Safiya Zavala-Sweet also could play a big role.