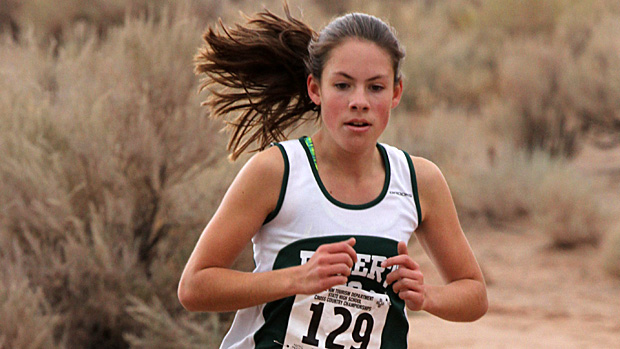 Desert Academy's Taylor Bacon returns for her junior season and a chance to help lead her team to something special this fall. Photo by Alan Versaw.

We can all hope that 1A girls cross country is in growth mode. A state contest with four complete teams and 27 competitors seemed just a shade on the side of thin late last fall.

Jemez Valley ran away with the thing, literally and figuratively, last fall. Starting with Valena Madalena who won the individual, and ending with being the only team in the field to bring seven runners, Jemez had things pretty well sewn up. The 20-point margin between Jemez and second-place Cimarron was a good deal bigger than it appeared. With only four teams scoring, it isn't necessarily easy to build a margin as big as 20 points. Perhaps a better way to look at it is to say that Jemez beat every other team in the field at every scoring position.

So, pencil in Valene Madalena, Jade Altheide, Sage Mijares, Janae Henderson, and Eulateria Patino as the favorites to win it all again this year. They went there separate ways to a variety of events in track season, but there's something enticing about coming back together to go chase another state cross country title in the fall.

While Valene Madalena had things going her way at state cross country, it was Desert Academy's Taylor Bacon who had things going her way at state track. Desert Academy finished third at last fall's inaugural 1A state cross country meet, but they could be headed for a stronger finish this fall. Based on what we saw this spring, Bacon probably figures as the individual favorite, and Eliza Donahue returns from her eighth-place finish of last year. The key for the Wildcats lies in bolstering the other three scoring places. If they can do that, they are very much in the hunt.

Cimarron, last year's runner-up, has Amy Gonzales, Selina Rael, Zena Stevenson, and Maggie Guenthner to start building their hopes on. Cimarron may not be able to match Desert Academy up front, but--at least at this stage of the game--they have superior depth and thus something of an edge.

Gateway Christian was the only other team to bring a full scoring five to last year's meet. Cross country numbers were already a little thin for the Roswell school last fall and losing a couple runners to graduation doesn't help.

State track and field results revealed no additonal 1A teams doing any serious building of their distance ranks. So, for now, we figure it comes down to Jemez Valley, Cimmarron, and Desert Academy. But, we can hope that more teams join the fray.