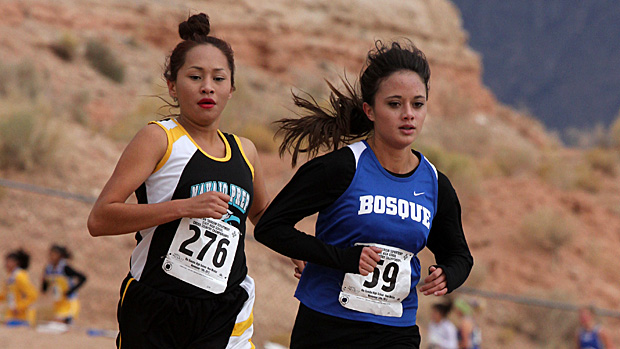 A great deal of how Navajo Prep and Bosque do this fall figures to be determined by the kind of seasons Muriel Waukazoo and Kendall Kelly have. Photo by Alan Versaw.

Nobody was able to run away with this thing last year. And it doesn't appear that the story line will be much different this year.

Navajo Prep took the win last year, but only 10 points separated Navajo Prep and third place. And, if you go up and down the ranks of 2A girls cross country runners from last fall, it doesn't appear that many have exited stage left via graduation (though that statement needs to be tempered a little by the fact that I know I'm missing years of graduation for several athletes).

Muriel Waukazoo finished second in the state race and returns this fall for Navajo Prep. Also back in key roles are Hannah Antone and Brandi Reano. It would seem that the Eagles are accepting their invitation to the party.

Unless I'm misreading something somewhere, East Mountain should have Addison Rauch, Talynn Turner, and Amira Cunningham all coming back. That's a loaded front three. East Mountain will be back as well.

Rehoboth Christian surprised a few people and finished third last year. They won't be sneaking up on nearly as many folks this year, but Lynx still qualify as dangerous. Look for Jordan Ide, Shannon Begay, and Drew Todechine up front for Rehoboth.

The Academy for Tech and Classics, the new kid on the 2A block, acquitted themselves nicely with a sixth-place finish at state. And, they were very likely the youngest team at last year's state meet. ATC should be climbing the ladder a little this fall if they get all their runners back this fall. Fiona Lamb and Julianna Tibbetts make ATC dangerous up front, but it could be the depth that is the key ingredient for ATC.

Bosque was dealt a blow by an injury to Reiley Kelly last fall. If Reiley Kelly, Kendall Kelly, and Jackie Katzman are all healthy this fall, there's not much disputing that the Bobcats have the top front three in the classification. The question then becomes one of what happens at #4 and #5.

That's my short list of team contenders for the fall. There's still plenty of time for other teams to jump on the bandwago, but these are the five that appear to be strongest as we scan the horizon of the season ahead. We should get good reads early on how Rehoboth and Navajo Prep compare, and also how ATC, East Mountain, and Bosque compare, but we may have to be a little more patient for glances at the whole picture.