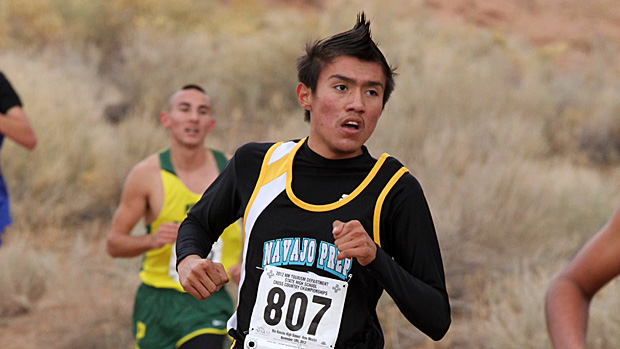 Leandrew Daily's contribution this fall will be key for the chances for Navajo Prep. Photo by Alan Versaw.

Last year, Laguna-Acoma struck fear into the hearts of all 2A. As a matter of fact, they struck fear into the hearts of just about everybody in New Mexico. But 2012 is history. A brand new season is approaching us and, while Laguna-Acoma is definitely in the hunt again this fall, it doesn't figure to be the kind of absolute runaway that the Hawks pasted on everyone last fall.

If you have to pick an early favorite, it probably comes down to a toss-up between L-A and Santa Fe Prep. Both have some depth; both can hurt you up front.

For Santa Fe Prep, it begins with Jimmy Buchanan. Buchanan had a disappointing state meet race last fall, but it would be unwise to count on that kind of lightning striking twice in the same place. Buchanan's state track meet suggests that things are back as they should be. Christopher Schild and Kyle Evaldson give SFP two solid entries to go with Buchanan, but the Blue Griffins may need to answer some questions beyond that.

Laguna-Acoma returns a very solid front two in Augustus Cuch and Isaiah Kelsey. But, like Santa Fe Prep, the magic eight ball isn't yet answering all the questions the rest of the way down the lineup. Young guys like Justin Chino, Jacob Sanchez, and Darren Smith who got tastes of experience last fall must be cast into larger roles this fall. If it all comes together again, Laguna-Acoma will be very tough to beat.

Navajo Prep ran well at last year's state meet, finishing third, but came up short largely on matters of depth. Lenadrew Daily, David Wauneka, and Isaiah Yazzie should be back to lead the team this fall. It's not nearly as clear, however, who steps up and fills in the slots at 4 and 5.

Beyond these three, the chances are more remote. It's going to take larger moves and even more help from people stepping up into new roles in the roster, but Zuni, Pecos, and Penasco are each teams worth keeping an eye--or two--on.

Zuni brings back Tyano Pinto, who could be one of the classification's best this fall, but must find a way to replace McKenz Leekya.

Pecos returns Ryan Sandoval, who had a very solid season as a freshman last fall, but must find a way to fill in for some big losses to graduation.

Penasco didn't even bring a team to the state meet last fall, but they return Kyle Fernandez, Patrick Denne, and Isaiah Rodarte, each of whom gained valuable state meet experience last fall. If the Panthers can simply keep these three healthy and bring a couple more along, they could quickly become trouble for the rest of 2A.

Sizing up what it took last year and what the various schools seem to have coming back, it seems reasonable to suggest it's going to take at or very near five guys at 18:00 or under to win this thing. Several teams seem capable of three, but getting to five will be where the difference is made.