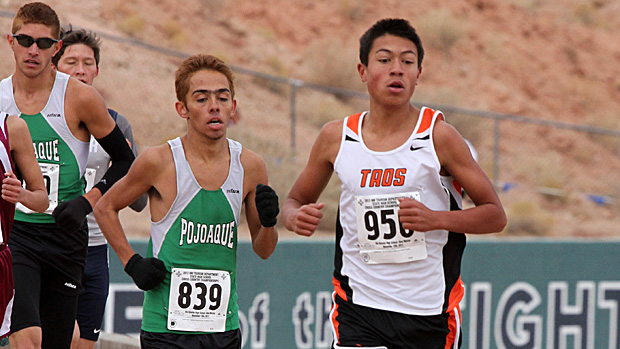 Donevan Gravelle and Derrick Grasmick both figure to have big roles to play in determining their teams' chances of taking home a 3A state title this fall. Photo by Alan Versaw.

When the gun went off for last November's state meet, control went very quickly to the Elks of Pojoaque Valley and then stayed there for the duration of the race. From a spectator's standpoint, there never really was a point at which the outcome of the race seem pointed in any other direction.

It's true that the guys in green lost a few off their team from last year to graduation, but with Jereme Santistevan, Derrick Grasmick, Ryan Maestas, and Matthew Herrera coming back, they're still going to be a load to handle this year. Winning a second time around is usually more difficult than winning the first time around, but these guys are experienced about what it takes and they bring no small measure of talent to the table. And, since they're already at two in a row, maybe #3 is easier to pull off than #2. It certainly doesn't hurt that Santistevan figures as the premiere distance runner in 3A for 2013-14.

Those who would chase them had best be preparing themselves for the chase even now.

The team in the best position to chase is likely last year's #2 team, St. Michael's. The Horsemen also return the strong core of a team for 2013's campaign. Troy Pacheco, Sean Noonan, Kristopher Cordova, and Denver Luttrell bring back state meet experience. There's clearly enough horsepower here to be a team of concern.

Taos figures to fall in behind Donevan Gravelle. Gravelle finished third in last year's state meet and figures to get help from Roy Madrid, Mateo Vigil, and Cade Cannedy. And, so, there's a Tiger or two in Taos's tank as well.

These three figure to be the top three contenders and their geographical proximity more or less guarantees they'll know one another well by the time state rolls around. That could make for a very interesting state meet.

Other teams looking to insert themselves into the title hunt figure to be Hope Christian, Ruidoso, and Shiprock. Each of these three teams took some hits to graduation, but each has some solid experience and leadership returning in guys like Pat Wood, Rylan Vega, and Shawvan Levi. Of the three teams in question here, Ruidoso got hit hardest by graduation and has the most to bounce back from. Shiprock and Hope Christian, however, a both just a couple of key runners away from joining the big three of Pojoaque, St. Michael's, and Taos.

It should be fun to watch this title bout develop. And, there isn't a team in the hunt that doesn't need to stay healthy.