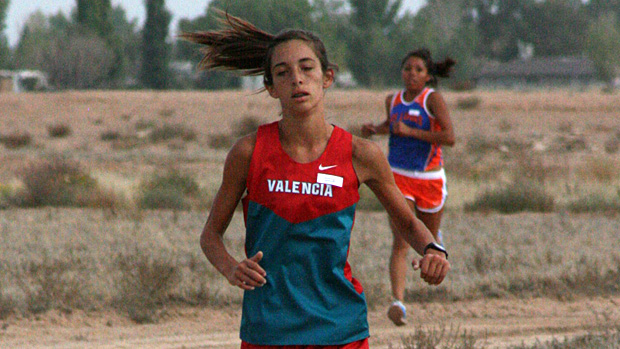 Valencia's Carisma Lovato leaves the pursuit of Kendra Lente in her wake. Photo by Carvella Lueras.

Though the hot air balloons in Albuquerque were not allowed off the ground due to windy conditions, the weather in Valencia County was perfect fall running weather. The morning was overcast and just a slight chill in the air that caused high school cross country runners to do their warm up pants and jackets for a change.

With the beautiful Monzano Mountains in the background, the Valencia High School Cross Country Invitational proved to be a smaller but fiercely competitive meet.
The teams in attendance were Valencia, Los Lunas, Socorro and Estancia.
In the girls Varsity race, the Los Lunas and Valencia teams shot off the starting line foreshadowing what was to be a close and competitive battle for first place and bragging rights at least for this week in Valencia County. Although each team has a front running athlete, it was Valencia's Carisma Lovato who was first across the finish line in 20:08, followed by Kendra Lente from Los Lunas in 20:29. Valencia was able to snare the 3rd and 4th spots across the line as well as the 11th and 12th for a combined team score of 31 compared to 38 by Los Lunas.
On the boys side it was an outstanding 1-2 punch by Estancia runners Jakob Bernal and Joseph Luna who crossed the line in 17:39 and 17:56 respectively. After these two, it was a battle once again between the host Valencia Jaguars and the cross town rival Los Lunas Tigers. Although Los Lunas ran the closer pack, finishing their runners 5th, 9th, 10th, 11th, and 12th with a pack time of 1:01, the advantage went to Valencia who had Alan Legarda, Carlos Caro, and Adam Larson finish in places 3, 4, and 6. The final score was separated by only one point, 46 - 47.
These teams will meet again next Saturday at the Los Lunas Invitational and I think that Larry Padilla will have his runners champing at the bit for round 2 against his daughter, Lynette Padilla's, Valencia Jaguars.
Tweets by