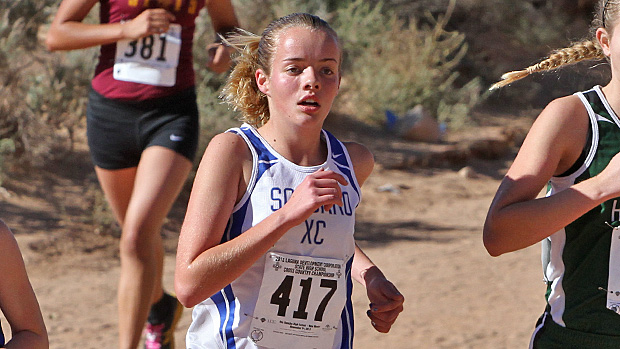 Emerald Goranson was Socorro's top finisher at state last year as a freshman. On Friday, she gets to help set the tone for a new season at Socorro's own home meet. Photo by Alan Versaw.

Yes, there were cross country meets in New Mexico, and just across the border in El Paso, this past weekend, but they were--in some sense, at least--prelude. The real thing--where everyone in the state toes the starting line and gets involved in the action--comes this weekend. A full slate of meets is set to hit the Land of Enchantment starting on Thursday and continuing through Saturday. Here's what you have to look forward to:

The weekend, as it were, begins in Lovington. This one figures to be the focal point for the southeastern New Mexico programs this weekend. Lovington is a bona fide cross country power in New Mexico, even at the 5A level, and those who make their way into town had best be prepared for a battle.

The focus of attention shifts a little westward with Alamogordo hosting their home invitational at Mountain View Middle School in Alamogordo. The Tigers figure to be hosting most of the Las Cruces area and possibly a couple of schools making the trip north out of El Paso.

A little farther north, Socorro plays host on the NMT golf course. About 10 teams is the limit of what New Mexico Tech will permit on their course, but Socorro makes the most of the opportunity they are given. Look for the field to fill with mostly mid-sized schools at the Socorro Stampede and look also for a few good clues as to who is holding strong hands within the 4A ranks.

To the west, Rehoboth Christian hosts their first meet without departed coach Jeff Engbers. The meet is traditionally a good draw around the Gallup area and promises some insights into where some of the strength lies in the 2A and 3A ranks. Rehoboth likely ranks first on the list of schools that would like to start the season well at this meet.

There are three meets of interest to fans of New Mexico cross country on Saturday, but one of those meets isn't even within the borders of the state.

Up in Alamosa, Colorado, the Joe Vigil Invitational welcomes Farmington, Santa Fe, Taos, and Capital to its starting line. It's possible other New Mexico programs are headed that direction as well, but I've not yet caught word of it if they are. Early indications are that this meet will be much bigger than it has been, at least on the high school side, for several years. Mettle will be tested early for the schools headed to Alamosa.

Closer to home, Del Norte hosts a smaller event at their home course.

The meet, though, that has been building a big sense of anticipation for the better part of a month is the UNM Lobo Invitational. This year's version of the Lobo figures to host more than 30 schools in all, including at least three schools from Colorado and at least one from Texas. It will be a full morning of cross country action sure to reveal secrets about several of New Mexico's top teams that have been kept carefully hidden all summer long. A more complete preview of this meet will arrive on the front page of MileSplit New Mexico later this week.