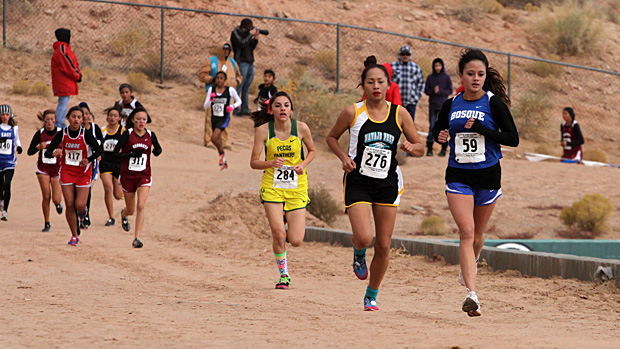 It figured to be one of the best team contests of the day. And, if anything, the actual race exceeded the pre-race expectations.
There weren't many ways to disguise the fact that Navajo Prep, Rehoboth Christian, and East Mountain were each coming in with solid teams. Each had more than enough potential to make trouble for the other two.
The race had suddenly become more interesting last weekend when Rehoboth upset Navajo Prep at the district meet, serving a kind of first notice that Navajo Prep's season-long reign over all things girls 2A was starting to crumble.
Before the team race could sort itself out, however, there was some sorting out of the individual leadership to be done first. 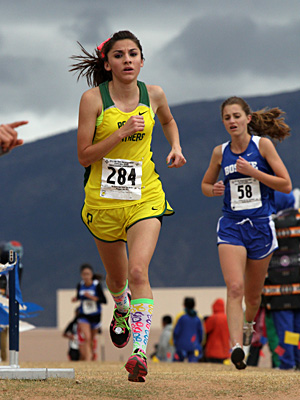 Bosque's Jackie Katzman did early what most expected her to do--set the pace. But, after working the pace hard early, Katzman reached a point of diminishing returns with respect to her lead. By about 1.25 miles, the main chase pack was clearly starting the process of reeling Katzman in.
Working the front end of the hunt on Katzman's lead was Navajo Prep's Muriel Waukazoo. And Waukazoo's push for the lead was critical for Navajo Prep's team chances. Without Amber Manuelito, who had carried the NP hopes so well during most of the invitational season, Navajo Prep was in serious need of someone to step up and make things happen. On this day, Waukazoo was the chosen person to fulfill that role.
Deep into the race, Waukazoo had overtaken Katzman's early lead and appeared to be cruising home for the win. A late, and furious, charge from Cassie C de Baca of Pecos (pictured, left), however, would rewrite that part of story. C de Baca would finish six seconds up on Waukazoo with a time of 20:04.
Still, Navajo Prep had a second and a clear first leg up in the team scoring battle. Katzman and teammate Kendall Kelly crossed in third and fourth, but Bosque didn't figure to be a serious part of the team contest.
Interest in the team scoring picked up in a quick fashion, however, at places seven through ten--Jennifer Lewis (Rehoboth), Addison Rauch (East Mountain), Talynn Turner (East Mountain), and Jordan Ide (Rehoboth) crossed the finish in quick order. Almost immediately, people started looking back to see what was coming next.
Over the next several places, Navajo Prep, East Mountain, and Rehoboth would trade in and out of the position of advantage. And, ultimately the decisive advantage would fall into the hands of Navajo Prep. With individuals removed for team scoring Navajo Prep's 1-11-12-15-29 would be just enough to edge out East Mountain's 6-7-10-16-34 and Rehoboth's 5-8-14-25-26.
But the 10 points that separated the top three places made 2A girls arguably the best team contest on the day.
Tweets by