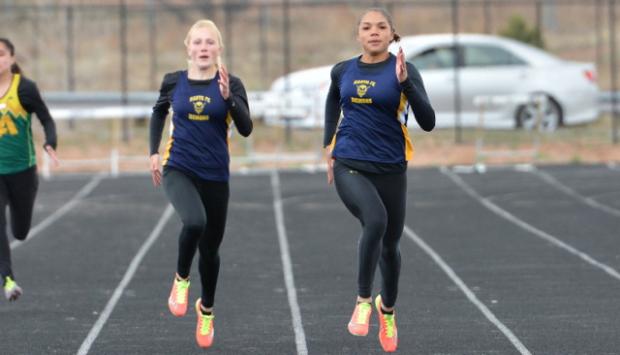 Santa Fe's Akeisha Ayanniyi (right) will be part of the quality fields at the Richard Harper Invitational. Photo by Blake Wood.

In a weekend of large Track and Field Invitationals, perhaps the most competitive of the lot will be held on the Albuquerque Academy Campus. Most of the same athletes that competed at the Marilyn Sepulveda Invitational eleven days ago will reconvene at today's Richard Harper Invitational.

In a meet with numerous potential state championship podium finishers, it's hard to pinpoint what events, and athletes to watch. We'll take a quick look at some of events that look to be the most promising.

Manzano's Jordan Byrd, Valencia's Joshua Burbank, and Capital's Augustine Larranga could go head-to-head in a rematch of the Sepulveda 100m. In the Girls 100m, Santa Fe's Akeisha Ayanniyi will take on all-comers as she victoriously did in the Sepulveda 100m. Here's hoping they all make it through to finals because both races look to be hot affairs.

The Boys 200m looks to be some of the same players battling for supremacy, while the girls race will potentially Los Lunas' Cera Chavez and Santa Fe's Ayanniyi go head-to-head on the curve.

Rio Rancho's John Finnegan could potentially pull many of the finalists in the Boys 400m to sub-50 clockings. While in the Girls 400m, should everyone make it through to finals, the entire field could potentially go sub-60. Especially on the heels of Del Norte's Malakah Martinez, La Cueva's Jamie Fenton, and Cleveland's Larimar Rodriguez.

With Atrisco Heritage's Gilbert Ramirez, Eldorado's Miles Brooks, and Belen's Aaron Valenzuela and their sub-2 minutes performances in the field, and a bunch knocking on the door step, New Mexico could see a new 800m leader should the pace prove honest. In the Girls race, each weekend more girls are gaining the courage to challenge La Cueva's Natasha Bernal, and if it continues this weekend, they could be rewarded with new Personal Bests.

Chances are these two races will see the same players. Manzano's Justin Kerstetter has been on a recent tear in the 1600m, and Academy's Jordan Lesansee has seen recent success as well. Look for these two to take on the likes of Cibola's Harrison Smith III, Belen's Aaron Valenzuela, Rio Rancho's Devin Paredes, and other familiar faces. In the Girls races, it could be the familiar foes of La Cueva's Bernal, Valencia's Carisma Lovato, Belen's Arena Lewis, and Rio Rancho's Molly Klein. Battle they did on the cross-country course, and battle they do on the track.

The true depth of each program will be on full display in these races. Look for the Volcano Vista Boys to flex their muscles and the Cleveland Girls to do likewise. While they may not claim the top spot in each relay, don't be surprised if they finish in the top four of each race.

Often overshadowed by the track, the field events today shouldn't be overlooked. The near weekly showdown between Cibola's Juan Pimentel and Academy's Jackson Morris should be fun to watch. So should seeing Rio Rancho's Steve Bailey throwing the Javelin. The potential tight battle between the Ram's Matt Jackson, the Cougar's Miles Brinson, and the Hawk's Alejandro Goldston definitely can't be missed.

In the Girls field events, Volcano Vista's Alana Young should see top-flight competition in both the Shot Put and Discus. While the Demon's Ayanniyi could see some stiff competition at the Long Jump pit. And of course, Eldorado's Lauren Martinez in the Pole Vault is definitely worth the watch.

While Team trophies will be handed out after all the marks have been measured, and everyone has cross the line (here are the Girls and Boys Virtual Meets), the beauty of a large, late season Invitational like the Richard Harper is having all that high quality competition in one spot. And that competition will draw the best from each athlete.