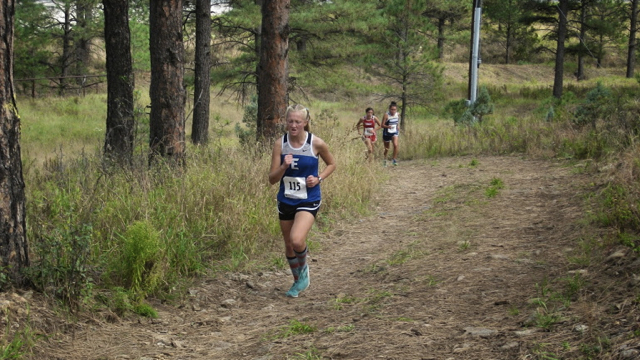 The Timberwolves' Amira Cunningham has proved a consistent contributer since 2011. Photo by David Rauch.

The 2014 New Mexico Cross Country season has entered the post-season and now we wait for the Outdoor Season to begin. Until then, we wil pass the time continuing to get to know this season's Senior Class.

As noted previously, questionnaires were handed out at the Jamboree, or emailed to those who were not in attendance, and this is what we get. The Top 30 Seniors were determined from the 5K Rankings before the Jamboree, then adjusted after the Jamboree. If a kid was Top 30 before the race, they received a questionnare, if they raced themselves into the 30, then they were emailed a questionnarie after. With that, we continue our series with East Mountain senior, Amira Cunningham.

What were your Goals for the 2014 XC Season? How did you progress toward them?

My goals for this season were to personally break 20 minutes and to win second in State for which I trained hard. I also had goals for the team which were: to become district champions and to podium at State.

What does a typical week of training look like for you? Do you Cross Train?

Typically, a week of training will include a ten mile Monday, a speed workout on Tuesday and Thursday with a morning recovery run on Wednesday and a pre-meet recovery run and skills day on Friday.

My favorite workout is when we do short sprints with strength and core in between in two sets broken up by an 800 and two 400s after the first set, two thousands in the second and two 400s at the end. I like it because the variety makes it seem to go faster even though it is still as hard as when we do all the running then all the strength.

How long have you been running and how did you get started?

I have been running since the 7th grade when my P.E. teacher suggested that I try Cross Country.

What is your favorite and toughest race so far?

So far, my favorite race has been the Rio Rancho Jamboree because I met my goal there. The toughest race was our home meet because of the hill.

My favorite XC memory is of me, Addison, and Tatianna intentionally clinking our two medals together as we walked to the bus.

Out of all your accomplishments, which one(s) stand out?

Winning State as a team is the accomplishment I will always remember.

What is your favorite subject in school?

I do not have a favorite school subject, every semester it changes.

When you’re not running, what do you like to do?

When I'm not running I like to practice karate, snowboard and spend time with my family and friends.

How have your Coaches influenced you?

My coaches have really made me realize my potential by giving me goals I think I can never achieve until I do. They have also taught me that I have an influence on my team and to make it a positive one. They inspire me to push myself and encourage others.

What are your plans after graduation?

After graduating high school, I plan on attending college.

Thank you for your time Amira, and congratulations on a exceptional 2014 fall.