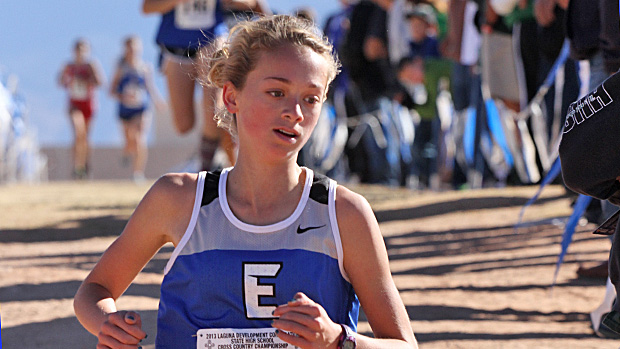 Addison Rauch and her East Mountain teammates completed the goal that got away from them last year. Photo by Alan Versaw.

In cross country, a solid pack normally beats a team with a substantial 3-4 gap.
So much for cross country rules of thumb, although it would depend a little on just how big your 3-4 gap gets.
Getting a clear picture of the team story in the 2A girls race was something of a challenge for a large portion of the race. It was difficult to see past how dominant Bosque was at the front and therefore to get to the markers that would tell the team story. 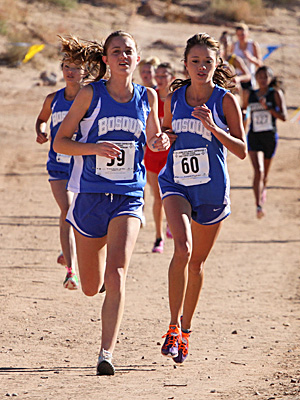 But, before we get to the team contest, let’s give Jackie Katzman and Kendall Kelly their full due. The blue-clad pair ran 18:50 and 18:57 to post times that would be bettered only by a small, and select, handful of 4A and 5A runners.
Reiley Kelly would finish in fifth (fourth in team scoring), leaving Bosque sitting in a very favorable position through three runners. It didn’t last, though. Despite having easily the best average team time in the 2A field, Bosque would slip to third in the team scoring.
An answer  to Katzman, Kelly, and Kelly was forthcoming--two answers, actually.
The first answer came in the form of a 7-8-10 (6-7-9 in team scoring) from East Mountain’s Addison Rauch, Amira Cunningham, and Tatianna Perlinski. In the space of a few seconds, East Mountain was on nearly even footing with Bosque.
But, East Mountain would have some nail-biting of their own to engage in.
Following Perlinski’s 20:34, Zuni’s Kassie Homer crossed in 20:47, scoring 11 points. In close succession, and all within 66 seconds of Homer, Selena Sanchez added 22, Tisha Zunie 23, Robin Delena 25, and Shanay Edaakie 26. All of that came without so much as a hint of response from either East Mountain or Bosque.
Zuni had ample reason to be hopeful as they gathered together beyond the finish line.
The hopeful nature of the gathering faded, however, when East Mountain crossed Amanda Bishop with 31 points and Ella Chavez with 33. Their finishes came in just enough time to complete the job that Rauch, Cunningham, and Perlinski had begun.
The state title was a first for a girls program at East Mountain, and a second title for the school overall. Coincidentally, both titles have come under the tutelage of Coach Dave Naylor—one in baseball and one in cross country. There probably aren’t many coaches, anywhere in the nation, who can lay claim that kind of combination of state championships.
While East Mountain was savoring the taste of the state championship that skittered away from them last fall, Zuni missed a state title sweep by a span of only 21 points.