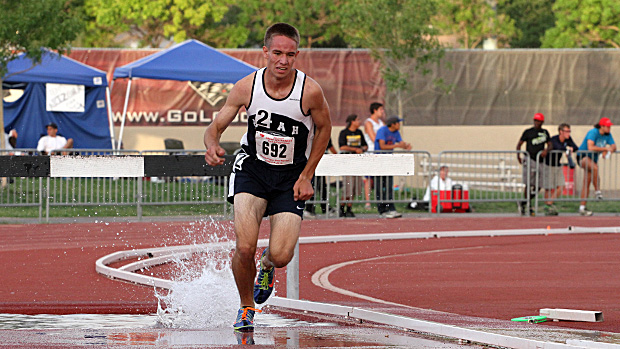 The steeplechase is a cruel event under any circumstances. Add 5000 feet of altitude to the steeplechase, and it becomes downright sadistic. Several athletes who were in Friday's steeple fields at Great Southwest would readily attest to that. 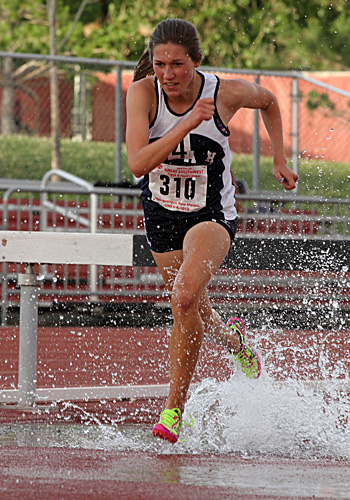 The Great Southwest brings in athletes from altitudes high and low. And it was mostly the athletes from "high" who took care of business in the 2000 steeple.

After a little more than a lap of measuring the field, Utah's Sierra Malm (photo, left, by Alan Versaw) saw only opportunity and took over the lead of the girls steeple. Two things became quicky apparent. First, Malm had spent a great deal more time honing the art of the steeplechase than most--if not all--of the rest the field. Second, Malm was going to run the rest of the race by herself.

When Malm had finished all 2000 meters of her chase, the clocked stopped at 7:21.19, just over 45 seconds ahead of second place. Second place when the Claire Sanner, a freshman out of Lawrence, Kansas.

The mystery of the boys race lasted somewhat longer as a couple of competitors traded off the lead before Jake Heslington of Utah took over. When Heslington went to the front, however, it was with the same decisiveness that Malm had gone to the front some 10 minutes earlier. As Heslington upped the tempo of the lead pace, the only two contestants who were able even to keep it close were Chuk Mitchell and Connor McMillan. Heslington, Mitchell, and McMillan would ultimately finish 1-2-3, giving Utah a clean sweep of the top three places.

As it had with Malm, a little sharpening of the steeplechasing art done at altitude paid big dividends.

The previous mens steeple meet record belonged to Ben Johnson, one of the finest high school distance athletes New Mexico has ever produced. Johnson's record of 6:05.06, however, vaporized the instant Heslington crossed the line at 6:02.50. Future Great Southwest contestants will have a new, and slightly more challenging, mark to shoot for starting in 2014.