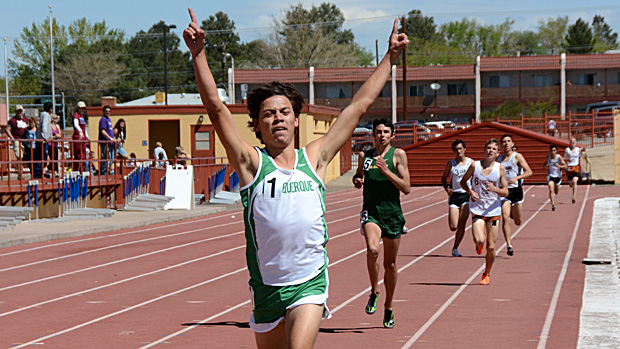 Andres Franco, shown here winning the 1600 at the Albuquerque Invitational, projects to be among the top athletes in 5A boys for 2014. Photo by Blake Wood.

So now that the 2013 outdoor track and field season has come and gone, what of 2014? You might be interested to know that, at least as of this moment, Cleveland does not appear to the quite as dominant of a force next year as this year. Graduation will do that to you know and then. That's not to say Cleveland is going away any time soon, only to suggest that there is some light at the end of the tunnel for schools wanting to hoist a track and field trophy of their own. Cibola would appear to be the first on the list of said schools.

If we take this year's best marks from our database, toss out the relays, and score those marks as a meet, here's what we get for 5A boys:

Athletes whose graduation years are unknown were left out of the list.