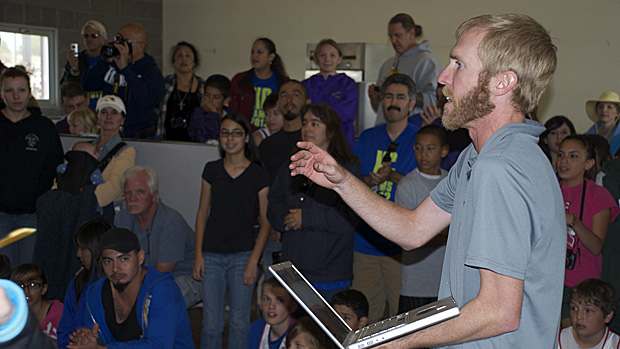 Computer in hand and announcing race results, Tim Host looks like any other meet director. But, looks can be deceiving. Photo by Shari Griswold.

Author's note: If I could be a teenager again, there are any number of coaches in New Mexico I think I would gladly run for. I've seen them in action. I know their style, and I'm pretty sure that style would push me off my comfortable center. But there was one coach I didn't know very well until I saw him in action back at the New Mexico state meet back in November.  Tim Host's coaching style immediately resonated with me. Almost the first thought into my head was, "This is a guy who would find a way to get the very best out of me!" Tim Host and I see many things differently, but there's no question in my mind this his passion for coaching would easily overcome all of that. I thought you would enjoy getting to know Coach Host a little more closely, as I did in the writing of this article.

Tim Host has been in New Mexico for almost a decade now. In that decade, he's likely had as much impact on the high school track and field/cross country scene as anyone in the state. But he hasn't followed the conventional road to success.

Tim's journeying, it seems, is always by a road less traveled.

He arrived in New Mexico through none of the usual portals. He didn't find a job in Las Cruces or Albuquerque. Not even Santa Fe or Los Alamos. Host began his stay in New Mexico in the small town of Navajo, coming there as part of the Teach for America program,fresh out of formative years in Wisconsin and college in Connecticut. Worlds don't get much further apart than New London, Connecticut, and Navajo, New Mexico. But Host didn't come to New Mexico looking for more of the same.

After a year of working in the elementary school there, he joined forces with his friend Gavin Sosa to coach the Navajo Pine cross country program. That much was a natural fit, as Host had run pretty much every distance event under the sun during his college career at Connecticut College. But the familiar part of the experience for Host pretty much ended with the sport itself.

First as an assistant coach in 2004, then as a head coach in 2005 - 2009, Host dreamed and produced the seemingly impossible--four consecutive boys and three consecutive girls state championships. Between the championships, he found ways to blend with the culture: herding sheep, attending chapter meetings, and running toward the rising sun. These were also years of coming face-to-face with some of the grimmer realities of life on the reservation, including the alarming suicide rate.

While Host's magic of running multiplied miles through the sage with his teenage charges was working a kind of magic with that segment of the population, it wasn't enough to hold his position when a new administration took over a the end of the 2008-2009 school year. Host was told he could reapply for his coaching position three weeks after the season started after all the teachers had returned from break.

Consequently, Host packed his bags and found another home at Rio Rancho High School, his day's duties divided between teaching special education for severe and profound needs students and coaching the girls cross country team. Though Rio Rancho is culturally a fair distance from Navajo, the same magic that worked miracles at Navajo Pine worked more of the same at Rio Rancho.

Although neither of his two years at Rio Rancho produced a state title, the Rio Rancho girls were very much a team to be reckoned with in both 2009 and 2010.

But the death of his best friend's father during his second year at Rio Rancho stirred the wanderlust in Host's heart anew. He and his friend embarked on a year-long road trip that took them exploring to just about every corner of North America, and countless places in between. I can't speak to the question of whether or not he found all that he was looking for, but he did come back to New Mexico.

You see, has Host describes it, New Mexico is a place "where weird people like me are tolerated and even enjoyed."

But returning to New Mexico meant moving again. The old job in Rio Rancho didn't wait for Host's return. So, the next stop on the journey was Santa Fe. Upon arriving, Host learned that The Academy of Tech and Classics was advertising for a cross country coach. Host found, though, more than just another job coaching distance runners. Principal Susan Lumley "hooked me into the greatness of the school and the limitless potential held by the student body."

And, once again, the bouncing ball of Host's life landed squarely in the field of opportunity.

And yet one more time Host and his cross country charges found each other to be a good fit. Although ATC is a 7-12 school, they--like a lot of other schools of choice--find that an elevated attrition rate at the high school level ranks high on the price tag of doing things differently. The distractions of the high school years sometimes tug heavily on the students' hearts and it's difficult for many students to stay the course in a challenging environment that doesn't look first toward matching the patterns of the surrounding culture. Consequently, at least to date, ATC has had a much larger enrollment in grades 7-9 than in grades 10-12.

If I were a gambling man, I'd wager that Tim Host is the kind of person who could change that pattern--provided wanderlust doesn't strike again too soon.

As Host 's assessment goes, "Watch out for our girls in 2013, we're hungry, we're smart, and we're coming for everyone. With that being said, it is certainly possible that some of our girls will transfer to other high schools. It's simply what has happened in the past, but I hope sports help keep some of these kids from transferring. Our boys will take a little more time to mature and make an impact at the state level, but they are equally hungry and excited to step up to the next level."

Along the way, though, they may have to grow accustomed to some of Host's own counter-cultural tendencies.

Maybe it's that solar oven that goes wherever he goes, including to track meets. Like his refusal not only of texting, but even of having a cell phone. And the quiet voice in the back of his head that occasionally reminds him of simpler days when he "was still living in my straw bale shack on the Navajo Reservation."

But, for all of that, there's also a part of Host that is quintessentially New Mexican, "I can start my morning with a run to the east with Native American friends, eat huevos rancheros as a post-run breakfast, watch an independent movie matinee with some hidden red vines in my pants pocket, and end the evening shocked at my unimportance under the immense sunset of the New Mexican sky. I'm very blessed, and if it wasn't for New Mexico, I'd probably would be too stupid to realize it."

It may also be relevant that solar ovens simply don't work very well in either Wisconsin or Connecticut.

Perhaps that's why it's called the Land of Enchantment.