Loading
<h3 style="text-align: center;"> A closer look at the personalities behind the programs...</h3> 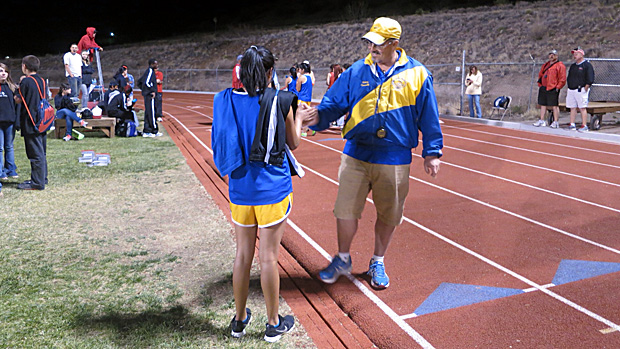 One of the first things I found out about Chris Carroll when interviewing him is that he is yet another part of the long green line of Adams State grads who still have their fingers in track and cross country long after their college days have ended. I'm almost beginning to think there are more Adams State alumni coaching in New Mexico than there are in Colorado.

In any case, sit back for a few moments and enjoy our conversation:

What initially drew you to Zuni and how long have you been coaching there?
I was substitute teaching and coaching track in Denver before I moved to Zuni. I came to Zuni in the fall of 1997, because I wanted a full time teaching position. I was hired and the rest is history. Part of that history includes coaching at the middle school and high school. Two years of volleyball and one year of basketball at Zuni Middle School, and 17 years of track, 15 years of cross country, and one season of cheerleading at Zuni High School. I was the athletic director for two years, too.
So you have been the head track coach at Zuni ever since you've been there, but not the head cross country coach from day one?
I started off coaching middle school volleyball and I was the head high school track coach. I will be starting my 17th year in the spring.  In 1999, I became the assistant cross country coach under Robert Torres. I became the head cross country coach in the fall of 2006.
Take us through some of the events in your life that led to you becoming a coach in the first place.
I was fortunate to have the opportunity to compete for Adams State College under Coach Vigil. I was not a cross country runner. I was a high jumper and long jumper. I have personal bests of 6-10 and 23-1, respectively.  Vigil had track and cross country athletes working together on some days of the week. Thankfully I didn’t have to do the 17-mile Sunday runs. This was the beginning of my understanding of cross country running and workouts. 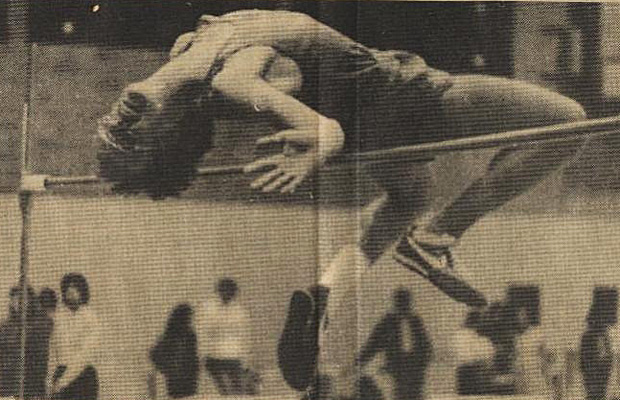 A much younger Chris Carroll clearing 6-7 in the high jump while at Adams State. Valley Courier photo.
After I finished up my eligibility, I asked if I could continue working with the jumpers. I became the jump coach for both the men’s and women’s teams, and coached the jumpers for three years. I then had the opportunity to coach at Alamosa High School. I coached there for two years, also in the jumping events.
It's my understanding that Zuni High School has a very large attendance area. I can imagine that can occasionally create some difficulties for doing all you would like to do with training distance runners in a cohesive fashion. What adaptations have you built in to deal with that? Or, do most of your runners live in the pueblo?
All the runners at Zuni live in the pueblo.
I believe that if you get your athletes to buy into your program, then you can keep the expectations high throughout the season. I don’t change much from year to year and I like that the athletes to tell me which micro-cycle we are going into and what workouts are coming up.  It’s the chemistry and the make-up of the team which dictates the outcome of that season. This year, I had great cohesiveness and a team attitude. It showed in the workouts and at each meet.
For a school your size, two trips to the Nike Cross Regional’s championship race is pretty special. What's the magic?
We started sending teams to Nike in 2008. My friends, Mr. and Mrs. Hipwood, suggested that my teams run in the open division. They said it was very competitive and we could use it as a stepping stone for the next year if we did well. The girls won the open race that year and it rocketed us to the dream season of 2009. That was the only season we have gone undefeated in cross country. The girls were so excited that they wanted to compete in the championship race and we were picked by the NXN committee, they placed 21st that year. When my teams are competitive and do well at the state meet, they seem to want to take it to the next level. That is when we move toward the championship race.
Your own cross country meet is one of the biggest and most successful in New Mexico. What do you do that keeps people coming back? 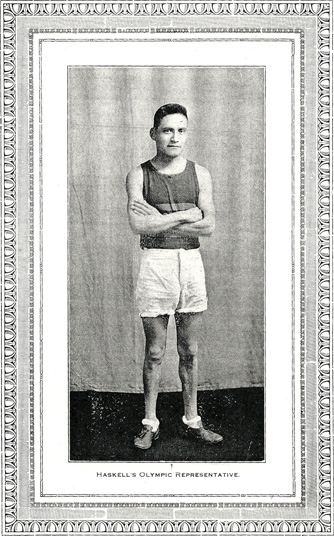 Our race has grown much in the past five years, and I believe it is because of the way the athletes are treated by the Zuni community. Santa Fe Prep has come down for the past five years and I am told by their coach that Zuni is their favorite race.  The scenery is unmatched. The course has a little bit of variety for everyone, except for pavement. The last 300 yards finishes in a tunnel of spectators, and they cheer for everyone. I work with an outstanding school staff who give up their Saturday to help at the meet. Last, but not least, the homemade posole and oven bread for the coaches is always a hit.
Tell us a little about Patason Amesoli, the man for whom your home meet is named...
In 2011, one of the elders in the village stopped me and asked if I knew about the Olympic athlete from Zuni. I kind of chuckled to myself, because I knew that no one from Zuni had ever been in the Olympics. I was wrong. In 1920, the Olympic games were held in Belgium. Patason Amesoli competed in the 10,000m run, the 8,000m cross country race and the 8,000m cross country team competition.
Patason was attending Haskell Indian School in Lawrence, Kansas, at the time. He was 19 years old, 4-11 and 100 lbs. Leading up to the Olympics, Patason ran a world record 20:10 for 4 miles on the road. In Chicago, his 10,000m time was 33:36. He then ran in Boston for the Olympic Trials where he beat 256 athletes to represent the United States in Belgium.
With some help from Adam Kedge, who found a 1940 household census, I was able to track down Patason’s grandchildren and great grandchildren. One grandchild drives us to our track and cross country meets, while another one cleans at our school. I have a great-grandchild who runs on my team. They knew he ran, but never knew he was an Olympian.
Your boys team started the 2013 cross country season with some very strong showings, then seemed to go into something of a funk, but then came out of things with a completely dominating showing at state. What happened between the middle of October and November 9th?
This year, Zuni went to a modified year round schedule.  After our home meet we had a week break.  I stayed around and ran workouts all week, but the kids were off of their schedules. Staying up late and sleeping in are a few of the issues. These factors contributed to a poor performance at Rio Rancho. In the championship race, they did not seem confident. We placed eighth. After the race, I showed them the winning times from the Rio Rancho Rams and compared them to our times at Gallup.  They could not believe they had the opportunity to win the meet.
The Grants Invite was cancelled because of rain and mud. Our next meet was the District 5-2A meet where we scored a perfect 15. This was the effort we needed heading into state. Our confidence was high and we went into the State Championship with one goal--winning.
What have been the track and field highlights at Zuni while you've been there?
I like to think that I brought track and field to Zuni High School. Zuni--as everyone knows--has been one of the quintessential distance programs in the state. We have had many state champions in the 800, 1600, and 3200. When I started track in the spring of 1998, I had a total of 7 athletes on my team. Currently, I average 60 at signups and end the season with 45-50. The highlights include 11 district championships. Zuni had not won one before my tenure. I have coached six state champions in the 110m hurdles, discus, javelin, triple jump (2), and 3200. We have had 98 athletes place in the state meet.
What can we look forward to from Zuni track and field this spring?
I have had students coming out of the woodwork asking about track this year, so numbers will not be a problem. I believe my girl’s team will be strong this year. I am heavy in seniors who have competed in the past three years and are excited to end on a positive note. We have all the disciplines covered. For the boys, it will be a rebuilding year in most events except for distance runs.
Tweets by