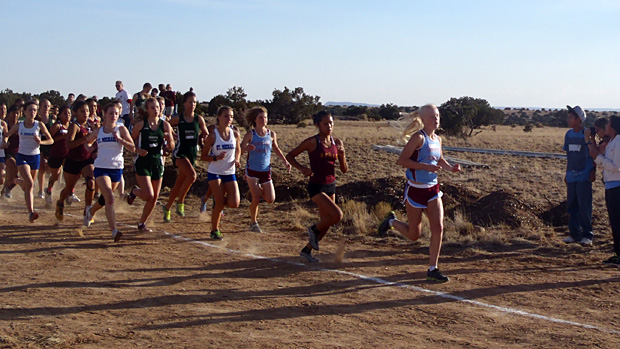 Rachel Fleddermann stakes out an early lead (one that she would not relinquish) in her district race last weekend. Photo by Tim Host.

If you believe the weather forecasters, and it's probably wise to heed their warnings, 2012 could easily be the second year in a row that weather plays a significant role in the New Mexico State Cross Country Championships. That would be hazard #1 of an outdoor sport.

Since, thankfully, nobody has proposed making cross country an indoor sport, it's time to embrace the elements. Those teams that don't are in deep trouble already.

Let's take a tour of the various classifications and genders and see what to expect on Saturday.

The only boys teams that have given Cleveland serious trouble at any point in the season are in 4A. Cleveland will be extremely difficult to dislodge from their top ranking going in.

The top contender to give Cleveland fits is, of course, Rio Rancho. Preston Charlie and Ryan Betty are capable of matching up fairly well at 1-2. Caleb Eppes and Mike Goke have shown a flash of promise or two this season. But, it's going to take five, and it will be a first for the season if any team in 5A is ready on Saturday to score five deep with the Storm.

Individually, Luis Martinez has seem able to open a gap on any field all season long. He comes in as a big favorite. Others hoping to keep themselves in the hunt include Zac Castillo of Volcano Vista, Seraiah Pineda of Hobbs, and the Betty/Charlie duo at Rio Rancho. Cleveland's own Aaron Flores, of course, figures among the classification's best individuals as well.

Eldorado's girls have been roughly equally as unstoppable on the girls circuit as Cleveland has on the boys. And, once again, it comes down to a matter of depth. Some teams in the state match up reasonably well with Eldorado early in the scoring order, but can't match up with the relentless scoring order for the Eagles. If the Ambergs don't get you, Stefanovich and Norcross will. If, for some reason, Stefanovich and Norcross slip a little, McCulley, Gorman, and DePoy have their backs. It's brutally simple--depth wins cross country meets.

And depth is an issue, at least when going against Eldorado, for Cleveland, La Cueva, Onate, Volcano Vista, or anyone else.

Individually, Malia Gonzales has been issued the singlet with the bulls-eye on back. It will be interesting to see who tries to match strides with her early in the race--and that can be a dangerous game to play. A lot of folks have tried that already this season and all have ended up with heavy legs late in the race for their efforts. Perhaps Onate's Meghan Aguilera goes for the chase to see what Gonzales is made of.

"Prohibitive favorite" will be the mantle worn by Los Alamos going on. LA has had trouble with one team only all season long--Cleveland. And Cleveland won't be on the same starting line. You must respect that tradition and coaching at Albuquerque Academy, but there's a fair bit of tradition and savvy coaching going on up near Bandelier National Monument, too.

There are two problems with facing Los Alamos on Saturday. One, the Hilltoppers should be a pretty fresh team. They've taken several weekends off from racing and still seem able to shove the pedal to the floor on cue. Rust accumulation hasn't yet shown to be an unintended consequence of their policy of not racing every weekend. The second problem with Los Alamos is that their top guys can absolutely bury you before you have a fighting chance to get in the race. Ask yourself, "How many 4A guys have run with Reardon, Hill, Kennison, and Hemez at any point in the season?" It's a short list.

AA can pack a pretty mean top five, but--at some point--they have to split up some of the LA top five, and that's going to be tough to do.

It could end up that the most interesting aspect of this race on Saturday is the battle for third.

Individually, I think it's a Reardon/Hill thing, but it's tough to get a good read on this because the courses in New Mexico vary so much in difficulty. That, and the fact that LA skipped the Jamboree make it difficult to draw clean comparisons. I'll be expecting green and yellow at the front, but it will be exciting if there are other colors in the mix once the race actually takes place.

And, you have one BIG question mark in the person of Claire Archibeck. Will she be running at state? If so, will she be anywhere near 100%? Prospects for AA could rise and fall dramatically on the answers to those questions.

St. Pius needs something big to happen at 4 and 5 to stay in the hunt. The front three of Reagan, Giannini, and Nathe will do their usual damage, but if Los Alamos packs their seven into the next 10 places, it's not likely to matter much what places the Sartans' top three earn.

Individually, some folks to watch figure to include Julie Giannini, Arena Lewis (who has had something of an on-and-off kind of run of finishes this season) of Belen, Claire Archibeck (if she's at 100%), Britani Gonzalez, and, of course, Jenna Thurman. Thurman seems like the choice of those who prefer to play it safe, but she is far from a lock to win this thing.

Shiprock and St. Michael's are riding the crest of big district meet wins last weekend (maybe Pojoaque, too, but I don't have those results to look at). Pojoaque beat both Shiprock and St. Michael's at the Jamboree. If there's another horse in this derby, it will make for a very interesting Saturday, but I haven't seen the color of that horse yet. Perhaps a slight edge goes to Pojoaque, but it's only the kind of edge that gets you into trouble on race day if you start to thinking that you own that edge.

Individually, I like the chances of Pojoaque's Jereme Santistevan, but Shiprock's Shawvan Levi could end up making a race of this one. Once again, however, the difficulty variable of New Mexico courses comes into play, here, and it's entirely possible I've skipped notice of another serious contender or two for lack of solid familiarity with the courses being run.

Sandia Prep more or less rolled up the field at the Jamboree. That's a result that has to stick in your head at this point in the season. But, it's too soon to go to sleep on Shiprock, St. Michael's, and Hope Christian. Give Sandia Prep an edge going in, but keep an eye on how the other three situate themselves in the field.

Individually, Sandia Prep's Rachel Fleddermann will come in as the odds-on favorite. In recent races, Hannah Varela of Taos has run the closest to Fleddermann and so gets the nod as the most apparent threat to Fleddermann for the title.

If Laguna-Acoma doesn't win this one, it should warrant the largest font headline in New Mexico cross country history. L-A has taken on, and obliterated, every obstacle in sight this season. The Hawks rolled through their district qualifier with a perfect score. Keyope, Riley, Riley, Cuch, and Kelsey have earned the respect they're receiving. It's difficult to imagine this train derailing.

But it's also difficult to imagine another dozen or so teams stepping to the line and throwing up a white flag. So, expect a race to occur. Other top teams in the field would include Pecos, Santa Fe Prep, and Zuni.

Alonzo Chavez of Mora is undefeated this season against small-school competition and figures to be plenty for anyone to handle on the state course. Eric Eridon, Patrick Keyope, and McKenz Leekya appear to be the best of the competition.

From the outside looking in, this one figures to be a lot more competitive than 2A boys. East Mountain has shown very well of late. If Bosque runs with all of their big three of Katzman, Kelley, and Kelley, they'll have a say in the outcome. Navajo Prep ran very strong early, but Amber Manuelito's result from the Jamboree suggests something went wrong there (or possibly before). In any case, it figures to make a big difference in Navajo Prep's fortunes if Manuelito is at 100% or not. Rehoboth Christian seems very nicely positioned to make a serious run here. So, there are a lot of intriguing possibilities where this team title is concerned. This race should generate more than its fair share of interest on Saturday.

Jackie Katzman owns the name recognition title on this race and figures to be the pre-race favorite. But, East Mountain's Addison Rauch beat her on what appears to have been a tough district meet course and also ran within 10 seconds of Katzman at the Jamboree. This one may not be as much in the bag as we all might have guessed early in the season.

We'll keep a serious eye on both the team and individual race in this one.

1A Boys and Girls

Uncle! I concede that I can muster very little insight into this race. It would appear that To'Hajiilee should be the favorite in 1A boys, but there are just too few results to sift through to get any sort of good sense for the hierarchy of it all. So, we'll watch and see what happens.