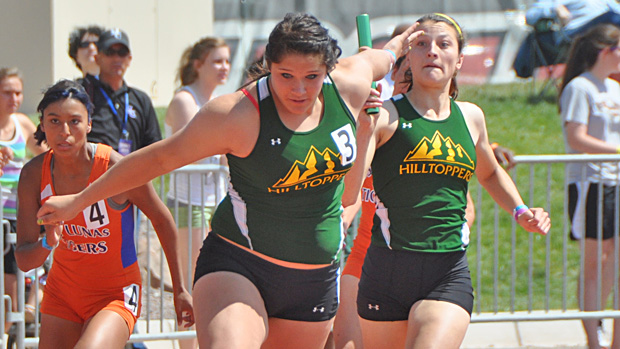 Don’t make another “Storm” pun.  Just don’t.  They’re just not good puns.  Never mind that New Mexico 3A-5A State Championships were delayed on both competition days due to rain, hail, lightning and thunder.  Never mind that Sue Cleveland High School’s mascot is “The Storm.”  And never mind that the dominance of both their boys and girls track and field teams was so absolute that cars at the Sue Cleveland camp were decorated with the words “State Champs”  while the meet was still being contested.
It would be inaccurate to say that Sue Cleveland was the story of the day, because a story requires conflict, and the Storm encountered very little of that.  Minor fits of adversity – yes (a false start by star senior sprinter Julissa Hunte in the prelims of the 100, and a hip injury that kept distance demigod Luis Martinez out of the 1600), but when all was said and done, the biggest shock was that their boys team won the 5A classification by only 36.5 points over upstart Alamogordo 94.5 – 58.  The girls won their meet with a handy 103-70 dusting of second place Eldorado.
The 4A classification went mostly as expected as well.  The boys title went to Albuquerque Academy, whose formula consisted of several stellar field event competitors and a deep distance squad.  Charger junior Andrew Torres easily won the discus with a toss of 150-9.  Academy also had the state titleist in the pole vault in the form of junior Connor Schmidt, who edged a competitive field with a 13-6 clearance.  The final margin of victory for the Chargers was 55-42 over second place Bloomfield.
On the 4A girls side, the Hilltoppers of Los Alamos High School won a close battle with Aztec High School 78-70.5.  Their star, as usual, was senior Chase Ealey.  Coming into the meet, there was buzz that Ealey wasn’t entirely healthy after she was seen limping following a misstep at a meet last month.  However, she quickly put those concerns to bed.  Before her first race in front of the main stadium (anchoring the prelims of the 4x100 meter relay) she had already broken her own state record in the Shot put with a 47-3 throw.  She added individual titles in the open 100 and the javelin and led her squad to victory in the 4x100 and  4x200 relays, giving her five blue medals to match her school’s blue trophy.
In 3A action, Hope Christian predictably dominated the girls field, winning the finals of all four relays (including a 13 second margin of victory in the medley).  The final margin of victory was 96-55 over second place Pojoaque.  The lady Huskies had the look of a very sharp and well practiced squad.  The 3A boys title went, as expected, to Silver High School 85-66 over the Hope Christian boys squad.
Notably absent from the results sheets  is 3A’s biggest name, Krista Armstead from Sandia Prep.  The senior suffered an unfortunate and unfitting end to her career when she pulled up in the preliminaries of the 100m dash.  She limped to the finish on an injured hamstring, and did not return to action.
Perhaps no athlete had a more rollercoaster meet than Eldorado senior Gina Okoye.  The Eagle centerpiece was crowned 5A champion in the long jump and triple jump, the latter with a new state record of 38-7.  She also emerged victorious in the 100 hurdles, where a photo finish was required to determine that Okoye had edged La Cueva senior Kaylin Martin (14.92 to 14.93).
The 300 hurdles were equally exciting, but came to a different and more controversial end.  Okoye again crossed the finish line .01 ahead of Martin.  In spite of white flags around the track and an award ceremony recognizing that result, a late decision was made to disqualify Okoye for a trail leg violation.  Kaylin Martin was declared the winner in the 300m edition.
Among the meet’s best races was the 4A girls 1600, where favorite Anna Olesinski from Roswell held off a late charge from Del Norte’s Jenna Thurman.  Both ran blazing times – 5:05.73 for Olesinski, 5:06.16 for Thurman.
Other highlight performances included:
-A new state record in the girls 4A 300m hurdles.  Piedra Vista sophomore Zhianna Flores ran 43.61.
-A new state record in the girls 5A javelin.  Carlsbad senior Kendall Munoz broke the record on subsequent throws, and the new mark stands at 140-9.
-An “arrival” story for Los Alamos junior Sean Reardon, who battled Del Norte senior Jackson Thomas for distance superiority in the 4A classification.  In stormy weather on Friday night, the two pushed each other to a MAJOR negative split (5:05 first mile, 4:41 second) with the favored Jackson coming out just on top.  Reardon bounced back in a major way on Saturday, running away in the last 300m to a swift 4:23.51 and the title. 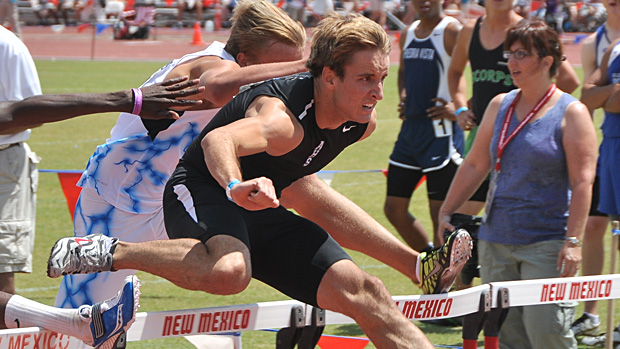 -A "departure" story for Alamogordo senior Mac Shoaf, who took the 5A 110 hurdles title in 15.06 after being beaten on the same track five weeks ago at the Marilyn Sepulveda Classic.
-Speaking of Jackson Thomas, after suffering the aforementioned defeat in the 1600 (his final high school race), he made a point to not only congratulate Reardon, but the entire 4A field.  It was a heartwarming display of sportsmanship from a classy competitor.
-La Cueva junior Randy Dias came in favored to win the 5A 800m run, but probably wasn’t expecting the challenge he got from Alamogordo senior Ike Shoaf.  The two fought up until the line coming across in 1:55.47 (Dias) and 1:55.66 (Shoaf).  Those marks represent the two fastest 800’s in NM high school track and field all season, regardless of classification.
-Eldorado sophomore Crissey Amberg won the 5A girls 800 in a time of 2:19.37.  Amberg was the #2 seed in the event and accomplished a valuable point swing by getting the win.  Up next for Amberg?  Cross Country season – where she will hope to build on her 5A runner-up finish from a year ago.
Until then.
Tweets by