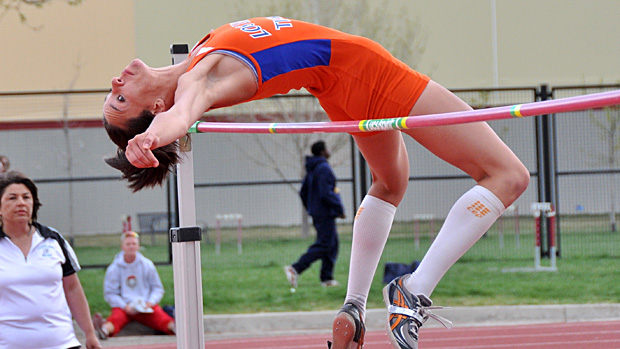 Nicole Jenrette creates a lot of interesting possibilities for Los Lunas and the teams they will compete against at this weekend's state championships. Photo by Blake Wood.

This one looks like a near dead heat between the girls from Sue Cleveland and the girls from La Cueva. It's entirely possible this one could come down to a little bit of relay luck, or bad luck. Neither team can afford to bleed many points and expect the other not to move ahead. Clovis, Hobbs, and Eldorado each have small chances at coming away with a meet title with an outstanding state meet, but mostly look to be clamoring for a third this time around.

The movers and shakers for Cleveland are sprinter Julisse Hunte, distance runner Malia Gonzales, and thrower Alex Winebark. Many others will score, and those additional points will be crucial, but these are the ones the Storm needs to score their expected points, or beyond their expected points. In a tight state race, you simply can't trade off the points coming from firsts, seconds, and thirds. To date, the best relays for the Storm have been the 4x100, 4x200, and 4x400. A win in any of these events, and especially one where they displace La Cueva would be huge.

La Cueva responds with sprinters Alexa Romano and Venitra Fields, hurdler Kaylin Martin, thrower Akuadasua Ezenyulimbia, and middle distance runner Haddie Schunk. Relays are just as critical for La Cueva as they are for Cleveland. Both schools have some great relays, and both schools need their relays to shine. Dropped batons and exchanges out of zones are major taboos.

Eldorado needs a typically huge meet from Gina Okoye and a few larger-than-expected contributions from a few others to compete for a title. Jenna Sievers occupies a similar role for Clovis. Hobbs has more high end potential in Andrea Wittman, Alexis Wright, and Kelsi Lewis, but probably not as much potential for others to step up just a little higher than they have all season and contribute points in ones, twos, and threes. On paper, none of these three teams looks to accumulate as many relay points as Cleveland or La Cueva, but all three teams have some serious relay potential if a little state meet magic arrives on the scene.

As exciting as the 5A contest promises to be, the 4A contest may be even better. Nobody should be falling asleep in the stands for lack of a story line to what's happening on the track.

Los Alamos and Los Lunas are both extraordinary teams with a nice balance of star power and supporting cast. Los Alamos can score points in piles with Chase Ealey. Los Lunas responds with Nicole Jenrette. The edge here likely goes to Los Lunas on the basis of Jenrette's sheer versatility.

At a level just a hair below what these two have been performing at are Amy Neal and Laura Wendelberger of Los Alamos, and sprinters Cera Chavez and Alexis Lafave of Los Lunas. This time, the edge goes to Los Alamos, once again on the basis of the versality of the individuals in question.

Relays might be a slight edge to Los Alamos, but best to put these on the track before making any calls.

Before anyone gets carried away and starts thinking of this as a two-horse race, however, we all need to stop and think about Aztec. You know, that school up in the quiet, northwestern corner of the state that doesn't get much media attention along either the I-25 corridor or the UFO quadrant of the state. Sprinter/jumper Kendra Mitchell and jumper/thrower Kaylee Farmer have been the big contributors for the Tigers, but there are more cats in the bag.

Del Norte, Artesia, Valencia, and St. Pius X are teams with some reason for hope, but also need for some things to go their way on Friday and Saturday in a big way.

Hope all you like, but the team with the most reason for Hope has Hope written into their name. This is the one girls team race this weekend that doesn't have the look of a tight and compelling contest.

There aren't many ways to answer all the different ways that Anna Duvall, Kearney Moss, Emily Nicolaysen, Erika Nelson, Jenae Christians, and Sara Cauwels can come at you. And, you can figure they've figured a few ways to load green-colored relays here, too. In fact, you've been seeing their relays all season. You know first-hand just how powerfully Hope can load their relays.

Sandia Prep has the most firepower in the house to go out and chase Hope, but there's a rule limiting the number of events Krista Armstead can compete in. Armstead, distance runner Rachel Fledderman, and jumper Shannon Glass-Smythe figure to score their points, but, barring a major collapse somewhere by Hope, those points don't figure to be enough.

Socorro, St. Michael's, and Pojoaque Valley are each very good teams, and each with a headliner kind of athlete on their roster in the persons of Zoe Howell, Maya McGowan, and Amanda Babicke, but winning on this weekend is going to take much more than any of these three can hope to contribute to the school's cause on their own. Track is an individual sport at the event level, but a team sport at the meet level. These teams will rise as the rest of their rosters take them.

All of the above, however, comes under a caveat. The health of a team's athletes, any team's athletes, is always a major factor in a state meet kind of competition. Injuries and illnesses can turn a favorite into an also-ran faster than you can find the number for the doctor's office. We wish every team at state all the best in keeping the twin plagues of injury and illness at arm's length, though it is inevitable that the factors will play some role in determining the state titleists.