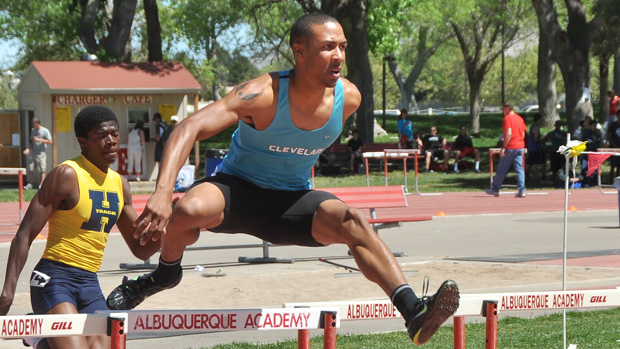 Cleveland rocks.  It’s beginning to sound like a broken record at this point.  Or maybe that’s just because the boys in electric blue broke another record.  Or four.
The boys competition was all Storm at the 2012 Richard Harper invitational hosted by Albuquerque Academy.  En route to an easy 122-56 victory over second place La Cueva, they broke four meet records as well as two all-time stadium marks.
Sue Cleveland junior Luis Martinez received his greatest challenge so far this spring from Del Norte senior Jackson Thomas.  Both boys were NXN individual finalists last fall, and ran like it in Friday afternoon’s 3200 meter showdown.  Thomas gave it his all, and, while Martinez never trailed, he needed a large PR to claim the victory, 9:13 to 9:22.  Martinez’s time carved five seconds off of a five year old Ben Johnson (Academy) stadium record.
The two showed down again in nearly identical fashion on Saturday in the 1600 meter run.  Martinez again came out on top: 4:17.50 to 4:21.48, breaking Matt Tebo’s (Eldorado) six-year-old meet record.
Sue Cleveland’s 4x100 meter relay finals performance (42.05) was also a meet record performance and was victorious over Highland (43.10) by over a second.
Their 4x200 meter relay may have been even more impressive. The mark was 1:27.87, destroying Santa Fe High School’s meet/stadium record of 1:28.50, which had stood for twenty years (1992).
As exciting as all that was, perhaps no event matched the atmospheric electricity of the concluding 4x400 meter relay. With the team outcome already long decided, Sue Cleveland nonetheless pulled no punches.  The Storm set their sights on yet another meet record – the one that they set last year in the 2011 edition of the meet.  The way they have imposed their will this season, it should surprise no one that they bested the time by more than a second.
The surprise was that by the time they crossed the finish line, their 2011 mark was no longer the meet record.  Just 0.2 seconds earlier, the Hornets of Highland High School had signed, stamped, and delivered a new meet record (3:22.55).  The thunderous applause that accompanied the near photo-finish no doubt reflected the emotion of a community that has to be wondering if there’s anyone out there who intends to sling a rock at Goliath.
Obviously just a battle in a losing war, the showdown sets the stage for a potentially epic clash at the NMAA 5A state championships in three weeks.
Speaking of the looming state championships – the gentlemen Chargers of Albuquerque Academy have to be feeling good about their chances after quadrupling the point total of archrival Los Alamos.  Academy, traditionally known for their distance events (where they excelled on their home track) has recently made some noise in another event.  Charger Junior Andrew Torres, a recent school record-breaker won the discus with a toss of 149-10, looks to be one of the state’s top throwers.  With regard to the team battle however, defending 4A champion Artesia still looms...
On the girls side, two 5A schools battled for first place rights, with the Eldorado eagles defeating their traditional rivals, the La Cueva Bears, 79-69 for the trophy.  Relay points played a large part in that showdown, as did Gina Okoye.  The EHS senior won the 100 hurdles (14.84) over La Cueva’s Kaylin Martin (14.91).  She also won the triple jump (38’4”) over teammate Gemma Biasetto (35’5”), the long jump (17-4) over Los Lunas’ Nicole Jenrette (17-3), placed third in the high jump (Jenrette 5-8, Lindsey Larsen – Volcano Vista 5-2, Okoye 5-2), and anchored the 4 x 200 meter relay to victory.
Notably absent from the girls field were the Sue Cleveland Lady Storm.  That’s a point worth noting, as the girls 5A podium will be crowded (based on results of last week’s Clovis invitational) with Eldorado, La Cueva, Cleveland, Clovis, Hobbs, and Alamogordo all vying for the blue trophy.
Two 4A girls schools finished 3-4 at the Harper Invite with Los Alamos edging Los Lunas 64-60.  The Tigers of Los Lunas had some fantastic performances, including Jenrette’s jumps, a victory in the 4 x 100 meter relay, and a 1-2 finish in the 200 meter dash from 8th grader Cera Chavez (25.88) and freshman Alexis Lafave (26.29).
Las Lunas should have some momentum going into the state championships, but it’s relevant that the lady Hilltoppers from Los Alamos had some bad luck in the early going, including a botched handoff that may have cost them the 4x100 meter relay and a false start in the finals of the 100 meter hurdles.  The ‘Toppers will be tough to beat as long as they have a healthy Chase Ealey on the roster.  The senior pulled off her signature double-victory with a 44-8.5 shot put and a 12.21 (FAT) 100 meter dash.
Other notable performances included (and please note that the meet utilized FAT times):
- Romell Jordan, Cleveland, double victory in the boys 100 (11.03) and 200 (22.45).
- Randy Diaz, La Cueva, won the boys 800 in 1:57.22, the fastest time in NM so far this season.
- Cheyne Dorsey, Cleveland won the boys 300 hurdles in 38.63 as well as the long jump with a mark of 21-9.5.
- Alex Oluyitan, Rio Rancho, dominated the boys shot with a put of 56-1.
- Krista Armistead, Sandia Prep, obliterated the field in the girls 400 with a time of 56.84.
- Jennalee Thurman, Del Norte, doubled up in the distance events with a 5:19.34 1600 victory and an 11:42.18 3200 win.
- Akuadasuo Ezenyilimba, La Cueva, was in a class of her own in the girls discus, winning easily with a 125-6. 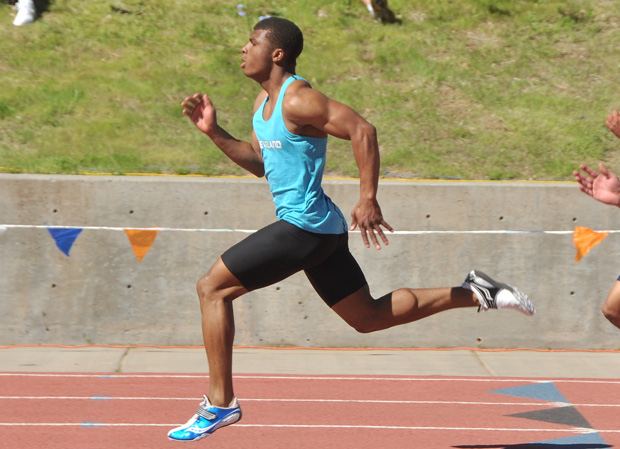 Romell Jordan was the class of the sprint field. Photo by Blake Wood.
Complete Results
Tweets by