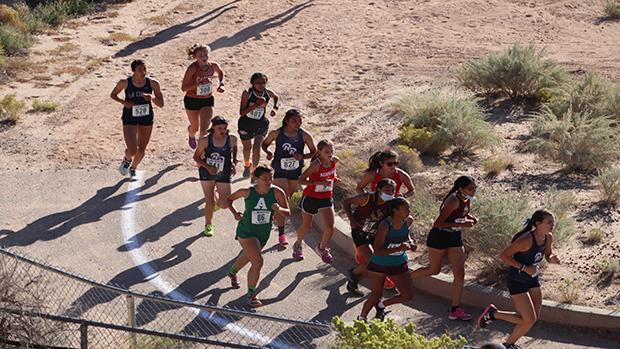 Jamboree returns with new energy and the same old flare

With the 2022 New Mexico cross-country season in full swing, we find ourselves once again back at the coveted Rio Rancho Jamboree this weekend.  A meet that brings in a plethora of teams around New Mexico and borderline Arizona to compete on one of the most unique courses around. Although the course is no longer the site of state championships, it still boasts a great obstacle leading up to trophy season in late October/early November. Right off the bat, we will take notice that ABQ Academy has opted to attend the Zuni meet this week, while Los Alamos appears to be off after traveling to the Joe Vigil Invite last weekend in Alamosa, Colorado. That's two powerhouses no longer in the mix so who might that fare for the remaining schools in attendance?

This will be the build-up to the pre-state meet next month as we get to see the top 5A schools battle it out with Rio Rancho on their home course, defending champs Volcano Vista and rising Eldorado find themselves likely on the podium this weekend. Timing mishaps from last week's Lobo Invitational have left us in a bit of disarray as to who has emerged onto the scene but we do know the main stars like Steven West, Rendon Kuykendall, Thomas Croshaw, Nick Moore, and Cody Sullivan are all capable of having a big race on Saturday.  Rio Rancho will look strong on a course they are most familiar with but just how well that familiarity plays a role against some of the best schools in the state early on in September will be the true test of Ram's depth.

To reiterate this year's edition of the girls' championship race will look completely different from years past as the Hilltoppers of Los Alamos will not be toward the front of the pack or in the pack at all as they and rival Academy are elsewhere this weekends. What better opportunity for Rio Rancho to show their strength midseason as they look to defend home turf against other perennial 5A powerhouses Eldorado and Volcano Vista? Opportunity rises for Eldorado as well as they may get their chance to distinguish themselves from the competition. As for the Hawks, they will certainly be in the mix throughout the entirety of the race as they continue on their title defense campaign. Of Course, we are looking forward to the individual race above all as Leah Futey put on an absolute show last weekend at the Lobo Invitational to win in a personal best time. Daniela Figueroa, Ariana Thiel-Hadjilambrinos, and Carysa Marquez are among the contenders that will be seeking to get a huge win at Jamboree to boast moral going into the latter half of the season.

SCHEDULE OF RACES AND EVENTS

Saturday 7:00 am: Packet Pick-up (in front of Football Field House)