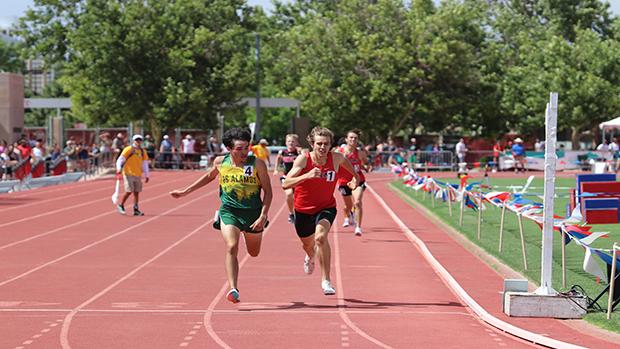 Results I Videos I Photos

We know we are back to state track and field action in 4A when we Have Los Alamos and ABQ Academy back at it competing for medals. In this 2021 edition, we see a rare sweep of distance events, season favorites shine and surprising new stars among the crowd.

Rafael Sanchez was in the Zone

Winning a single event among the 4A ranks is a challenging task in itself but for Rafael Sanchez to start his day with a 3200m victory and to then continue the trend is extraordinary. Sanchez would come back later in the 800m with a personal best at 2:01 and sitting at 4th on the heat sheet, he outleaned the #1 seed Joaquin Deprez as the pair both went 1:59 for a fantastic finish. For his final event of the day, he would find himself in a tactically slowed pace of the 1600m which would include a last-lap burst from ABQ Academy's Justin Hickey in an attempt to burn out Sanchez who just a so much left in the tank to give as he would yet again find himself crossing the finish line victorious in 4:42. The start of the sprints included Goddard's Javyn Morales and Jayden Abernathy proving why they were seeded at two of the top three in the state as they sprinted away with a state title and runner-up performance in 11.23 and 11.31 with Cameron Crawford in 3rd and James Jenkins in 4th. The 200m would be Lovington's 4th seeded Adam Aguilera outlasting a challenge from Los Alamos Tyler Weiss takes the win in 22.40. James Jenkins would finally get his state title in the 400m which included a personal best of 49.94. Bernalillo's Nolan Ennis found a way to win both long and triple jump from some narrow margins with a leap of 22-00.75 and 43-09.75 just over Ethan Beevers and Tristan McNeal's runner-up marks. Joseph Godshall would find himself on top in the high jump over talented Traise Cain and James Jenkins. Godshall would win the day with a leap of 6-2. Berndt proves why he was the #1 Seed, Tramell and Marquez win their specialty

Los Alamos senior Max Berndt went into the state championships with a target on his back being the #1 seed and followed through as you could expect. Berndt launched three throws that could have won him shot put settled with a 49-04 to secure him a gold medal. In the discus, it was Lovington's Alex Tramell overcoming Berndt this time for his first title and Justin Hazel to sit in 3rd place. Del Norte's Adrian Marquez launch of 166-3 put him in first over Kirtland Central's Troy White-David to end the day. Plenty of teams exchanged being on top of the podium in the relays with Kirtland Central taking 4x100m, ABQ Academy in the 4x800m and 4x400m, and Goddard in the 4x200m but it would be Los Alamos consistency to remain among the top three of every relay along with taking the sprint medley that was most crucial in the final standings.