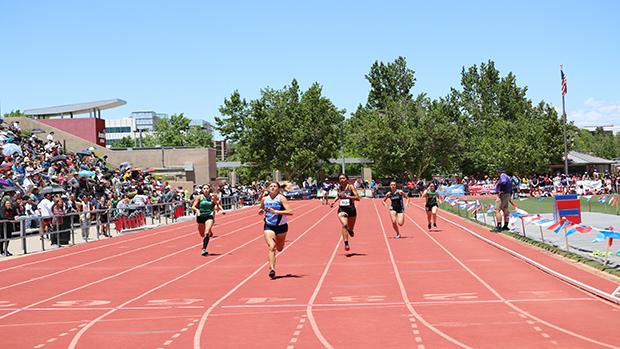 Watch 2021 NMAA State 4A, 5A Track and Field Championships Here

As we arrive at the eve of the 2021 NMAA 4A State Track and Field Championships, we look at some of the best matchups to watch. Distance events include plenty of potential state champions from a pair of schools, Pole Vault, and High Jump could see the bars raised quite a bit and we got hurdle stars going against one another on a Friday of Championship action.

We have got Los Alamos girls with the top marks coming into these events with Nyla Lee, and Holly Sanchez but don't count out Artesia's Isabel Caleyo or Pojoaque's Alicia Quintana.  In the 200m, you add hurdler Bailey Yost to the mix, Tia Hartzol, and Angelina Passalacqua to put a very talented 200m Heat #2 on another level. The boys' side will see Goddard's Javyn Morales and Jayden Abernathy taking on James Jenkins of Hope Christian and Kirtland Centrals Cameron Crawford in the 100m/200m. Also in the 200m, watch out for Los Alamos' Tyler Weiss boasting the #2 mark in the field.

4A boasts a stacked distance field mostly consisting of Los Alamos And ABQ Academy. They consist of the majority of names on the Athletes to Watch list and it is anyone's guess as to who will be on top of the podium. Look out for Joaquin Deprez who leads the 800m and 1600m field for boys as well as teammate Justin Hickey in the 3200m. Other boys in contention include Jesse Sanchez, Rafael Sanchez, Keith Bridge, Eric Scharton, and Rendon Kuykendall. Girls' side well represented by the Hilltoppers include Hailey Mcdowell, Sophie Chadwick, Emma Montoya, and Norissa Valdez. Also in the mix is Grace Archibeck, Vanessa Gallegos, Emma Patton. These events will have so many contenders toeing the line that could pull off a win so be sure not to miss those races.

In this matchup, we find Portales Traise Cain with the New Mexico #2 mark at 14-0 with a pair of Hilltoppers behind with Kyle Hatler & William McTeigue part of that 13ft club. We all will be hoping this event goes the distance and we see some high flying action to new personal bests and further.

James Jenkins will be looking to hit a new personal best over 6-4 while taking on Traise Cain who sits at 6-2 going into the meet. Both Jenkins and Cain can benefit from this being their first events of the day prior to sprint/hurdle obligations.

We talked about the distance frenzy and we will get to see that 4x800m that the Hilltoppers and Chargers bring to a championship setting. Meanwhile, Bloomfield is entering this meet with the top marks in the boys and girls medley as well as the boys 4x100m and a contender among girls 4x100m. Los Alamos girls 4x100m will be a tough unit to beat with them stacked in the 100m at the moment.