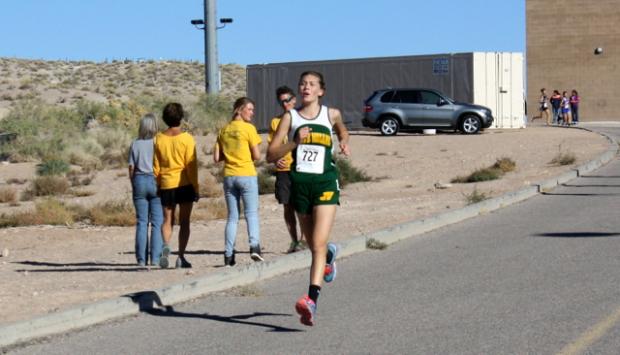 Jemez Valley's Jade Altheide and her Lady Warrior teammates hope to find themselves atop the podium this weekend. Photo by Holly Patterson.

The postseason is in full swing in New Mexico. The fields are set after last weekend's District Meets for Class 1A-3A and the races are about to begin. But before the first gun is fired or the first mark measured, let's take a quick look at how things could potentially play out this weekend at University Stadium.

In 2014, the Class 2A Girls team title was decided by 1.5 points, with a three way tie for second place. Based on the Friday Heat Sheets, there is a real possibility a similar scenario could take place with five teams.

With 17 entrants, the Jal Panthers sure have the numbers to make a serious run at the top of the podium. Led by Morgan Hiebert in Javelin and their 1600m Sprint Medley Relay team. In a two day meet, having 17 girls ready to run could prove the deciding factor.

The Ramah Mustangs have 13 entrants and three top seeds. Led by Taea Hill in the 300 hurdles and Triple Jump, and Charlie Daniels in the Long Jump, the Mustangs look to build on their 2014 runner-up finish.

Led by Valene Madalena in the 3200m, Jade Altheide in the High Jump, and Jazmine Chosa in both the Shot Put and Discus, the Jemez Valley Lady Warriors are looking for a podium finish. With 10 total entrants, the Lady Warriors may have just enough firepower to get on the podium.

The Tatum Coyotes are in a peculiar position as having no top seeds but still having the numbers to prove a podium threat. With 17 state entrants, the Coyotes will look to their depth to keep their podium hopes alive.

The final team in the podium mix is the Fort Sumner Vixens. The Vixens boast 14 state entrants, led by Oriana Ortiz in the 200m, and Paris Allred in the 400m, as well as top seeds in the 4x100m and 4x200m relays.

Based on the Friday Heat Sheets the Boys 2A title race looks to be between four teams. The Magdalena Steers, Hagerman Bobcats, Jal Panthers, and Logan Longhorns look to vie for the three places on the podium.

Behind Barak Stephens and his top seeds in the 110 hurdles, 200m, and Long Jump, his 12 Steer teammates will be hoping to see a blue trophy.

Despite having 11 state entrants, the Hagerman Bobcats do not have any top seeds. But based on the quality of their entrants, the Bobcats are dangerous.

In a two day meet, it helps to have fresh legs ready to roll, and the Jal Panthers' 21 entrants need to be watched. With Clay Adams leading the way in the Discus and Shot Put, the Panthers are dangerous.

The Logan Longhorns are perhaps the biggest threats to the podium. Led by Mike Estrada in the 300 hurdles and Pole Vault, Larramy Roberts in the 800m, and Wyatt Strand in the High Jump and Long Jump, the Longhorns boast nine top seeds. Having four of those top seeds coming in the relays, the Longhorns look to be the favorites.