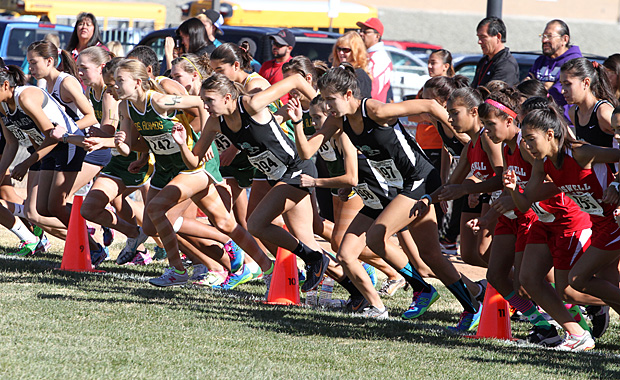 Los Alamos, Santa Teresa, and Roswell will all be running in the girls Championship race at Saturday's Rio Rancho Jamboree. Photo by Alan Versaw.

There are usually three check points during the typical New Mexico high school cross country season: the first race, the end of September, and mid-October.

While there were many races to choose from at the start of the season, the largest meet was the UNM Lobo Invite, which had 31 boys and 26 girls varsity scoring teams. 19 of those teams are entered in Saturday’s Championship Division races.

At the end of September, 21 teams in the Championship Divisions chose from the Albuquerque Academy Invite, Las Cruces Public Schools Invite or the Piedra Vista Totah Invitational.

On Saturday, 32 varsity boys teams and 30 varsity girls teams will toe the line in the last big cross classification clash of the season. Let’s take a look at a few story lines from both of these races, starting in Saturday morning’s race order.

While the girls Championship race can be seen through the same lens as the boys race, what’s really exciting about this race has been mentioned in the Cleveland Invite Meet Summary:

It speaks to the overall level of talent that athletes like [Jessie] Hix or Rio Rancho’s Molly Klein can be overshadowed by newer harriers eager to stake claim as elite performers. New Mexico’s high school running scene is deep with fast harriers, and these late September meets serve as a reminder to the bubbling talent percolating under the dense training programs around the state.

As the weeks have passed, this statement has become ever more true. Just scrolling through the teams and the names associated with their teams, it reads like an All-star Meet: the Albuquerque Academy Girls, the Addison Rauch-led East Mountain Lady Timberwolves, the talented Eldorado Lady Eagle trio of Melia Macias, Esther Beck, and Jessie Hix with their teammates, the Gallup Lady Bengals, the Natasha Bernal-led La Cueva Lady Bears, the Madison Foley-led Los Alamos Lady Hilltoppers, the Onate Lady Knights and their own talented trio of Meghan Aguilera, Amerhyst Aguirre, and Renee Baldwin, the Andi Almodovar and Molly Klein-led Rio Rancho Lady Rams, Santa Teresa’s Regina Marquez, Britani Gonzalez, and Joanna Miranda, the Lacey Howe-led Shiprock Lady Chieftains, the Jordyn Dilorenzo and Hannah Baca-led St. Pius Lady Sartans, the Hannah Gunther-led Taos Lady Tigers, the Carisma Lovato-led Valencia Lady Jaguars, and the Gabriela Pineda-Dominguez-led Volcano Vista Hawks. If you were counting, that’s 13 teams that could come away victorious at any meet in New Mexico. And they’re all in one race. Exciting.

However, if you’re looking for which team will walk away victorious, realistically, the list narrows to the four teams who received votes in the most recent Southwest Region Rankings: the Eldorado Lady Eagles, the La Cueva Lady Bears, the Los Alamos Lady Hilltoppers, and the Rio Rancho Lady Rams. Of the four, the NM #1 Lady Rams have toppled the other three in the previous two weeks, and they look to make it three consecutive weeks.

On the individual front, the conversation starts with La Cueva’s Natasha Bernal. Through five races, the first year harrier has a 24 second average margin of victory. 24 seconds roughly equates to a 100 meters. In every race she’s run. Against the best the 505 has to offer. 24 seconds. UNM Lobo, first. Cleveland Invite, first. Albuquerque Academy, first. La Cueva Bear Cave Brawl, first. Albuquerque Metro, first. Look for her at the front of the pack after mile one aiming for her sixth victory.

Taking all the above into account, here are some questions Saturday will help answer:

In less than one day, these questions will be answered, and more will be posed. Jamboree ya’ll!

To see the depth of this field, click here to view the Virtual Meet.