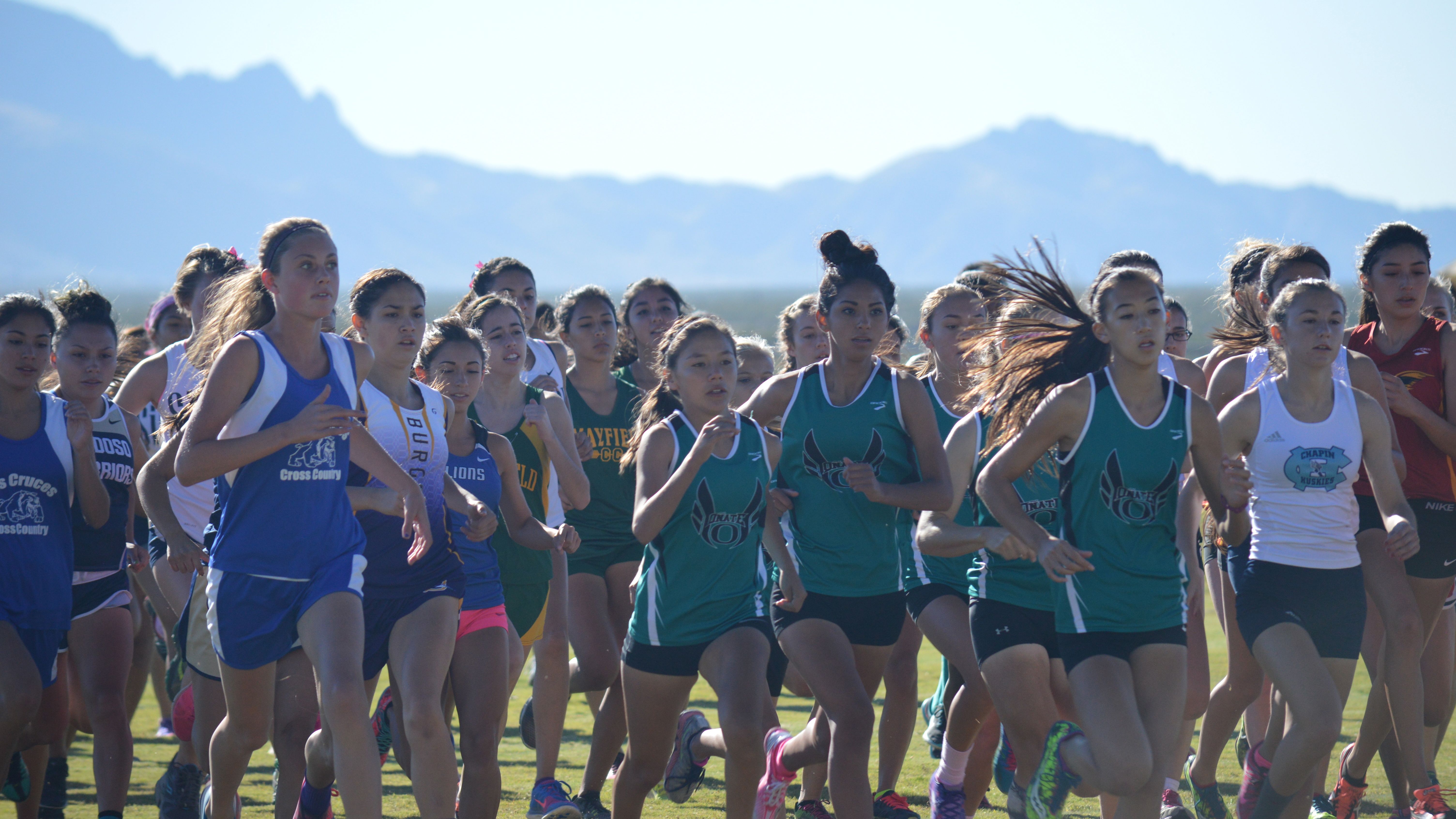 The start of the girls varsity race at the 2014 Onate Rob Winter XC Invitational saw 18 teams firing off at the gun. Photo by Kelly Salas.

One thing you can always count on down South in October is a perfect race day. And Mother Nature didn’t disappoint as the biggest cross country meet in southern New Mexico this season came together. The 2014 Onate Rob Winter Classic in Las Cruces proved to be a tough borderland battle for most of the 463 athletes from 22 El Paso and Southern NM teams attending the event. The true three mile course provided some fast times and an opportunity to run on varied terrain of sand, grass, pavement, and a spectator- friendly 400 meter finale on the track. With some of the top ranked athletes from the area lining the start, the best runners from Clint, Cathedral, Santa Theresa, and Las Cruces schools were the ones who left their marks at the finish.

As expected, seasoned senior harriers Regina Marquez and Britani Gonzales of Santa Teresa led the charge at the front in the varsity girls division, with Las Cruces sophomores Renee Baldwin and Amerhyst Aguirre of Onate and Irene Fernald of Las Cruces High close behind. However, in the absence of Onate notable Meghan Aguilera, it was Baldwin who laced her shoes a little tighter and filled that leader slot for her team giving Marquez and Gonzales a run for their money. The Santa Teresa duo held off Baldwin until the last 800 meters, and then it became a test of true southern grit. Hitting the track for a last sprint to the finish, Baldwin dug deep and pulled out the win, clocking a personal best of 18:54, her second victory this season.  “When I started the race I wasn’t really expecting to end up where I finished, but once I was in front, I wanted to make sure I did everything to hold on to my win,” Baldwin stated. “All I really try to do is run my own race and keep improving every week. I know my training will prepare me for race day.” Marquez and Gonzales finished second and third in 19:03 and 19:04, and Aguirre and Fernald came in fourth and fifth in 19:12 and 19:18 respectively. 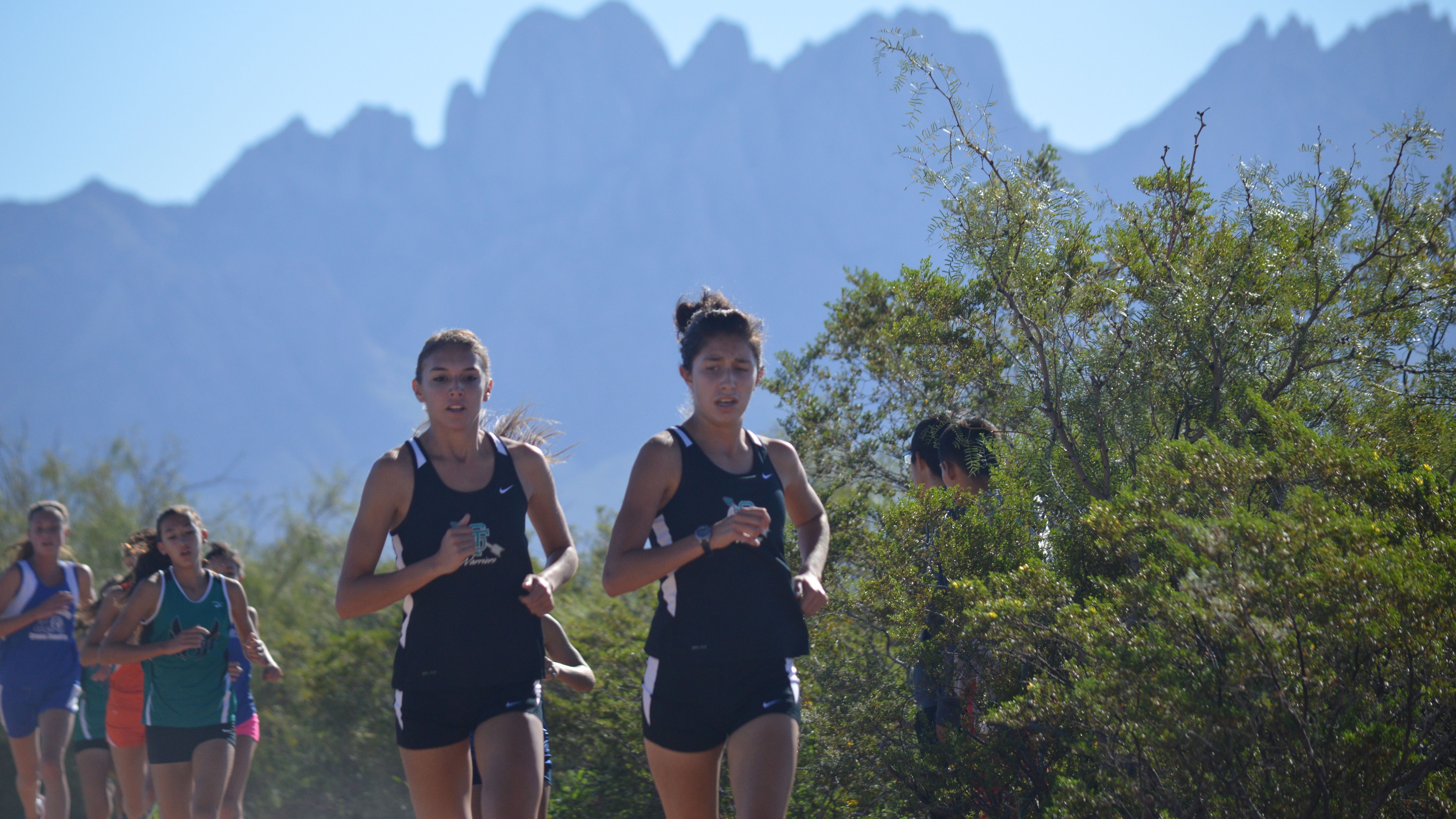 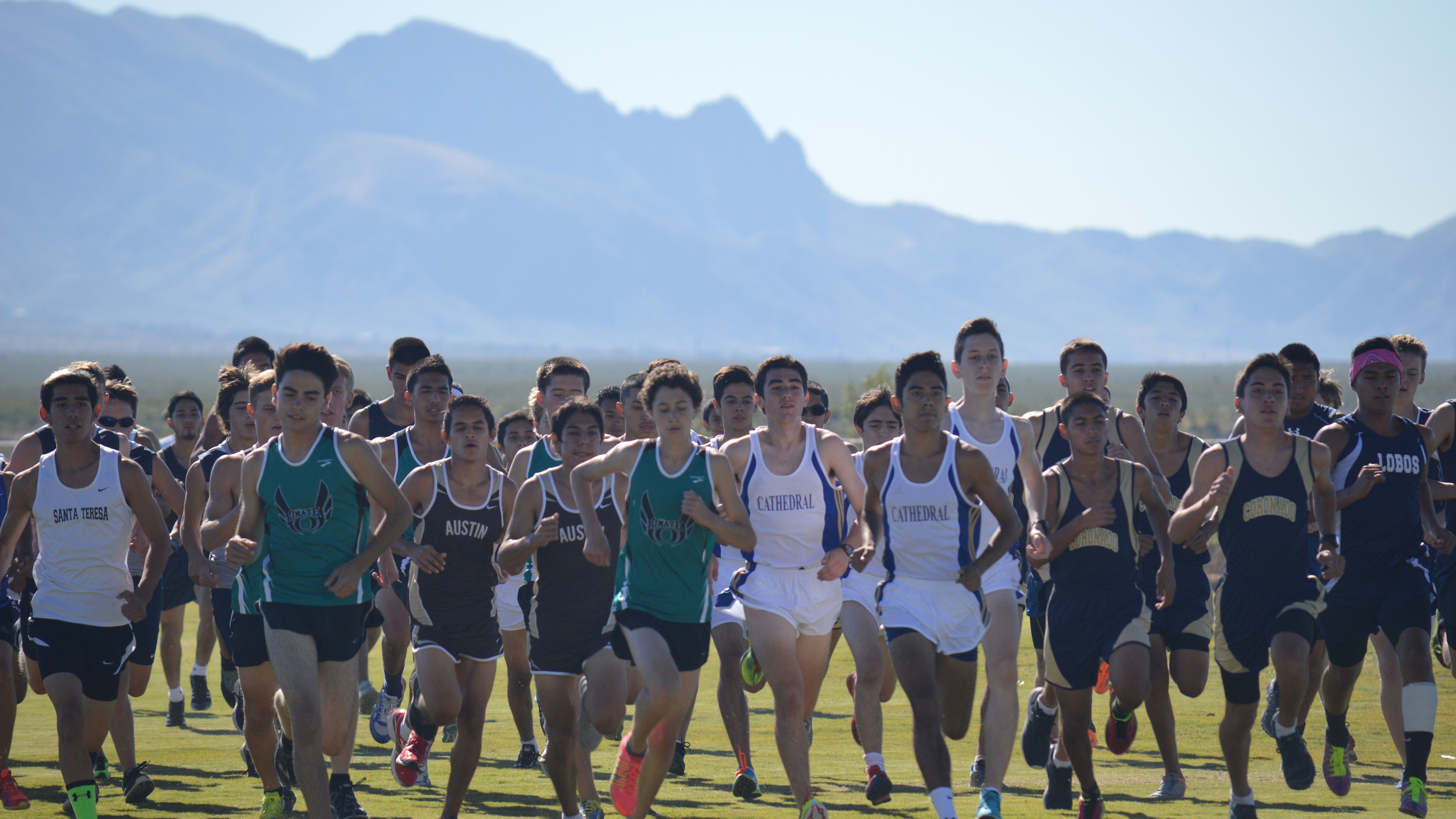 Onate's tandem of Manny Casillas (left) and Thomas Salas (right) race to the front in the boys varsity race. Photo by Kelly Salas.

With 117 boys in the varsity race, a quick start positioned Onate sophomore Thomas Salas and senior Manny Casillas in the lead of a tight pack including Clint, Texas senior Stetson Rayas and El Paso-Cathedral junior, Louie Barba, with Irish teammates Eric Peters and Esteban Esquivel-Reyes in tow.  As the front runners began to set themselves apart from the masses, a surge in pace at mile two pushed Rayas and Barba to the forefront and secured their places at the top for the remainder of the race.  With less than 500 meters left,  Rayas took control of the finish and crossed the line with a time of 15:58; Barba was second in 16:05, and Salas was third in 16:13, putting some distance in the last stretch between himself and Cathedral’s next two scorers, Peters and and Esquivel-Reyes who placed fourth and fifth.  “It would be great to be able to travel north more often to race some of our state meet competition or even see them head our way some time, but I am very thankful that we have the support of some of the best El Paso runners in the area as well as in the country, like nationally ranked El Paso Eastwood and Cathedral who keep me inspired to compete,” confided Salas. “It is important to be surrounded by other programs and athletes who want something as much as you do.”

In the hunt for a team championship, El Paso-Cathedral High ran away from the rest of the field with an impressive 35 points, earning them the first place trophy, followed by El Paso-Chapin (113) and host Onate (124).