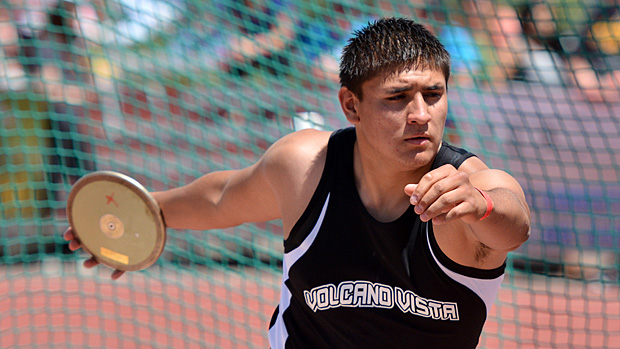 Mike Budick leaves high school as one of the top prep throwers New Mexico has ever seen. Photo by Blake Wood.

CHICAGO (June 20, 2014) — In its 29th year of honoring the nation’s best high school athletes, The Gatorade Company, in collaboration with USA TODAY High School Sports, today announced Mike Budick of Volcano Vista High School as its 2013-14 Gatorade New Mexico Boys Track & Field Athlete of the Year. Budick is the first Gatorade New Mexico Boys Track & Field Athlete of the Year to be chosen from Volcano Vista High School.
The award, which recognizes not only outstanding athletic excellence, but also high standards of academic achievement and exemplary character demonstrated on and off the track, distinguishes Budick as New Mexico’s best high school boys track & field athlete. Now a finalist for the prestigious Gatorade National Boys Track & Field Athlete of the Year award to be announced in June, Budick joins an elite alumni association of state award-winners in 12 sports, including Ryan Hall (1999-01, Big Bear HS, Calif.), Meb Keflezighi (1993-94, San Diego HS, Calif.), Derek Jeter (1991-92, Kalamazoo HS, Mich.), Candace Parker (2001-02, Naperville Central HS, Ill.), Mark Sanchez (2004-05, Mission Viejo HS, Calif.) and Lolo Jones (1997-98, Roosevelt HS, Ia.).
The 6-foot-3, 235-pound throws specialist won a pair of individual state championships this spring and led the Hawks to a second-place finish as a team at the Class AAAAA state meet. Budick captured gold by launching the discus 168 feet, three inches, and completed the double by hurling the shot 60-0.5, the latter of which ranked as the nation’s No. 62 performance among prep competitors in 2014 at the time of his selection. The 2013-14 Albuquerque Journal Male Prep Metro Athlete of the Year, he was undefeated in both the discus and the shot put in-state this season and also earned silver in the javelin at the state meet with a throw of 183-8.
Budick has maintained a 3.45 GPA in the classroom. He has volunteered locally as a peer tutor and as a youth track and field and wrestling coach.
“Mike Budick was always favored to win any event in which he competed but he was always a good sport, often encouraging those competing against him,” said Alex Mikaelian, head coach at Eldorado High. “He could have easily acted with conceit but he always displayed good sportsmanship by not bragging or gloating. He has been a positive focal point for our sport here in New Mexico.”
Budick has signed a National Letter of Intent to play football on an athletic scholarship at the University of New Mexico this fall.
The Gatorade Player of the Year program annually recognizes one winner in the District of Columbia and each of the 50 states that sanction high school football, girls volleyball, boys and girls cross country, boys and girls basketball, boys and girls soccer, baseball, softball, and boys and girls track & field, and awards one National Player of the Year in each sport. The selection process is administered by the Gatorade high school sports leadership team in partnership with USA TODAY High School Sports, which work with top sport-specific experts and a media advisory board of accomplished, veteran prep sports journalists to determine the state winners in each sport.
Budick joins recent Gatorade New Mexico Boys Track & Field Athletes of the Year Luis Martinez (2012-13 & 2011-12, Sue Cleveland High School), Eric Fenton (2010 – 11, Hope Christian School), Warrick Campbell (2009-10, Highland), Curtis Beach (2008–09, 2007-08 & 2006-07, Albuquerque Academy) among the state’s list of former award winners.
To keep up to date on the latest happenings, become a fan of Gatorade Player of the Year on Facebook and follow us on Twitter. For more on the Gatorade Player of the Year program, including nomination information, a complete list of past winners and the announcement of the Gatorade National Player of the Year, visit www.gatorade.com/poy
On The Line: Shawnti Jackson's Development Jan 27, 2021
On The Line: The Week's Best Indoor Marks Jan 27, 2021
On The Line: Most Improved Athletes So Far Jan 27, 2021
On The Line: Deep Dive Into The 757 Showdown Jan 27, 2021
On The Line Breaking Down The NC State Champs Jan 27, 2021
On The Line: Woonsocket Bash Bro's Interview Jan 27, 2021
Tweets by