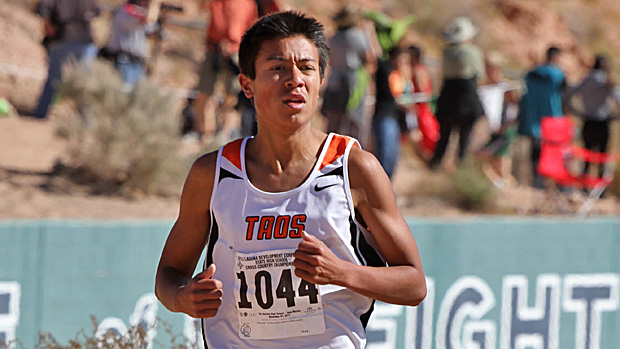 Donevan Gravelle made certain the Taos scoring got off to a great start, and his teammates cleaned up nicely in his wake. Photo by Alan Versaw.

When you make the trip down to Rio Rancho from the shadow of the Sangre de Cristos you want to come hungry, real hungry. Taos, apparently, has that figured out. Why settle for a single-dip cone when a double-dipper is within reach?

The Taos boys watched the girls do their thing in the morning, then went out and did much the same thing on their own in the afternooon. Meet Taos, the undisputed new monarchs of New Mexico 3A cross country.

While the Taos boys delivered on a state title to match the one the girls won earlier in the day, the eventual outcome wasn't apparent as quickly as it was with the girls. In early stages of the race, Taos had plenty of company from St. Michael's and Lovington. Later in the race, however, the altitude appeared to be exacting its particular kind of toll on Lovington, whereas Taos themselves wore down St. Michael's--a team already sufficiently acclimated to Rio Rancho kind of elevation. 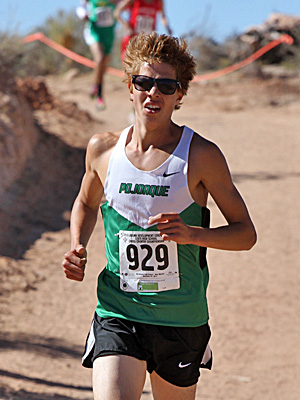 Exactly how it happened, though, doesn't matter as much as that it happened. Taos got top-five finishes from Donevan Gravelle and Roy Madrid, another top-ten finish from Mateo Vigil, and solid top-25 finishes from Cade Cannedy and Tristin Padilla. Taos would defeat their down-the-valley rival St. Michael's at every scoring position, and by the biggest margins at the front. The 57 to 91 team scoring tally does not tell the story as well as the 17:15 to 17:40 average team time does.

Taos was simply dominant. Where other teams wavered late in the race, Taos held their paces and advanced their positions. In the final mile of the race, Taos was offering nothing of either comfort or solace.

The looks on the countenances of the runners from opposing teams leaving the soccer fields portion of the course told all that needed to be told of the story. The outcome was no mystery to those who shouldered the burden of running the race; Taos had distinguished themselves above all others in this friendly conflict. St. Michael's, bouyed by a strong effort from Troy Pacheco, held together very well, but only well enough for second. Pojoaque, returning to the scene of their state championship of a year ago, claimed a distant third.

The individual race was settled a good deal sooner than the team title. When you come in with a reputation such as Jereme Santistevan came in with, it's difficult to find people to go out with you. The pace that Santistevan (photo, left, by Alan Versaw) makes look easy slides rapidly into suicidal for the mere mortals of high school cross country. A lead of five seconds at the mile went to 12 seconds at two miles, and eventually to 20 seconds by the full 5K. Despite running the entirety of the race alone, Santistevan completed the course in 16:10

And only Shawvan Levi of Shiprock managed to keep it as close as 16:30. While Gravelle and Madrid would eventually finish third and fourth, they were wise enough not to get caught up in the heat of the chase early.