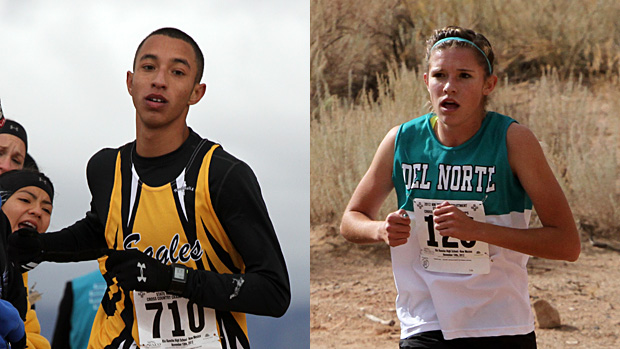 There were some tough choices to make here where I took into view entire seasons rather than focusing on just the state meet. And, at least one of these was so impressive in his state meet that he probably earned a step up from second team solely on the basis of his state meet. The group as a whole was very impressive. Luis Martinez, of course, stands apart from the rest, but it's a group of serious quality all around.

The more I dug through the season results, the more the small-school entries in this group clamored for attention. Eridon's season, of course, ended prematurely, but he ran very well in the window of opportunity he had. Santistevan made his case not so much with a time but with a convincing win at state and a very strong run at Los Alamos. You know there was more in him than state squeezed out of him where there was nobody to ride his shoulder and press the pace a little.

Taking the seasons as a whole, these seven seem to stand out from the rest. Erin Archibeck's season may have developed later than the others, but they were all on top of their games when it counted the most.

Okay, I promised this would be seven, and it ended up at eight. But, it was really tough to get this down even to eight. Going from eight to seven would mean splitting hairs between three or four runners. And, there were a couple more that narrowly missed inclusion with these eight. It would have been much simpler to have taken merged state places 8 - 14 and called it good, but how do you ignore the body of work represented in the seasons of Archibeck, Lewis, Gianinni, Agilera, and Amberg? This is a very solid group of individuals, some of whom just happened not have had the best of state races (or no state race at all). Maybe the best part of all here is that every one of these girls will be back next year.