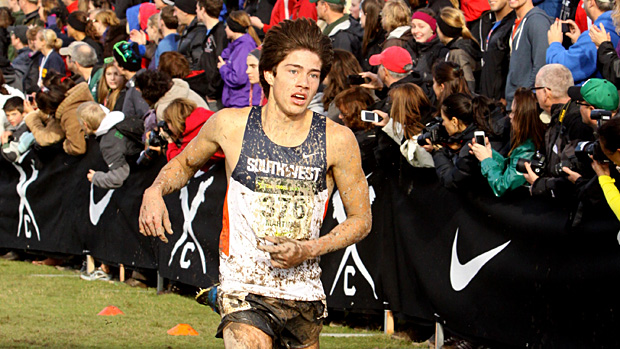 Save for Luis Martinez's spectacular run at NXN, New Mexico rode quietly into the sunset of the 2012 cross country season today. Photo by Patty Morgan.

Martinez's run, however, was anything but quite. Lightly regarded as an NXN title contender after finishing third in the Southwest regional two weeks ago, Martinez proved that early impressions can be deceiving. And maybe particularly so when the course throws a curve nobody was really fully prepared for.

On an NXN course as muddy, or muddier, than any in recent memory, Martinez boldly went to the front of the pack early in the race. And, though places up front traded off like market commodities, when it came to the end of the race, the commodity of Luis Martinez looked very strong indeed. Martinez had held on for a third-place finish in 17:17, only 11 seconds out of first.

Erasing some disappointments from the NXR-SW race, Martinez finished ahead of all other Southwest region contestants on the day.

New Mexico's fortunes did not end up as bright in Walnut, California, at the Foot Locker West Regional, however.

Del Norte's Jenna Thurman and Sandia Prep's Rachel Fleddermann came in hoping to make some noise in the west regional. In both cases, however, that noise failed to materialize. Thurman went 19:41 for 43rd and Fleddermann 19:48, good enough for 47th.

New Mexico had no boys finish in the top 100 of the seeded race at Foot Locker West.

With no Foot Locker National qualifiers, the 2012 high school cross country season has officially ended for the state of New Mexico.