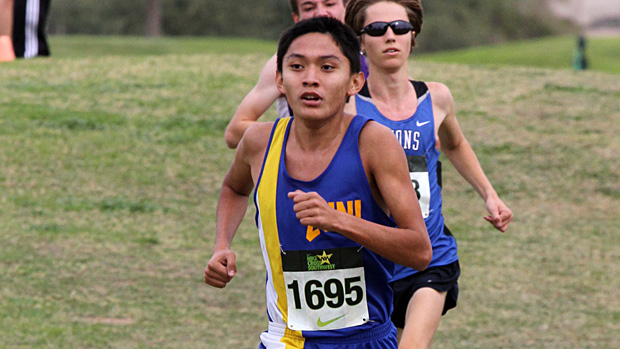 McKenz Leekya was New Mexico's top finisher in the open races at NXR-SW, with a solid time of 15:53. Photo by Alan Versaw.

Is it just me or is anyone else feeling like this event has become a whole bunch tougher the last couple of years? I fear there is no going back to the good ol' days. The new reality is that there are a whole lot of teams that are better now than the almost all of the best teams used to be.

That's one idea out on the table. A second idea to toss onto the table is that a one-week turnaround between the New Mexico state meet and the Nike-SW regional meet may have been a very tall order.

The Los Alamos boys ran to a third-place finish and a possibility of an at-large bid for Nike Cross Nationals next weekend. As it's been all season for the Hilltoppers, it was a solid team effort that got them there.

From Sean Reardon's 15:47 in 57th (39th in team scoring) to Zak Kennison's 15:53 in 72nd (49th in team scoring), it was only six seconds and 10 places between the first and fifth runners for Los Alamos. That's putting punch in the pack time. Now all the engineering types up in Los Alamos get to spend Thanksgiving week analyzing the possibilities for next weekend's regionals and figuring what each of those possibilities mean to Los Alamos's at-large chances. Meanwhile, the boys get an additional week of training without knowing what the outcome of all that will be. There could be a run on fingernail files in Los Alamos this week.

While Cleveland officially bowed out of the NXN derby with a fifth-place finish, Luis Martinez figures to be going back to Portland to finish out his high school cross country career. He did not successfully defend his NXR-SW title from last year, but he did run third in 14:54. And that's nothing that should be mistaken for a poor effort. Aaron Flores added a 15:26, good enough for 22nd, but the magic was not there for the Cleveland Storm on Saturday.

Albuquerque Academy was the next New Mexico team in the finish order at 22nd.

For the girls, the picture was not as bright. Los Alamos took top team honors among the New Mexico schools in 12th. While that result is, no doubt, disappointing, it does seem to square well with their finish on the same course back in September. Albuquerque Academy and Eldorado (a team that came to Arizona a bit short-handed) finished 20th and 21st, respectively.

New Mexico was lightly represented in the open races, but Zuni's McKenz Leekya stood tall with a 15:53 for fifth in the open boys race. Joseph Clark of Volcano Vista added a 10th in 16:05.

Liz Turner of Los Alamos was the top New Mexico finisher among the open girls at 13th, with a time of 18:51.