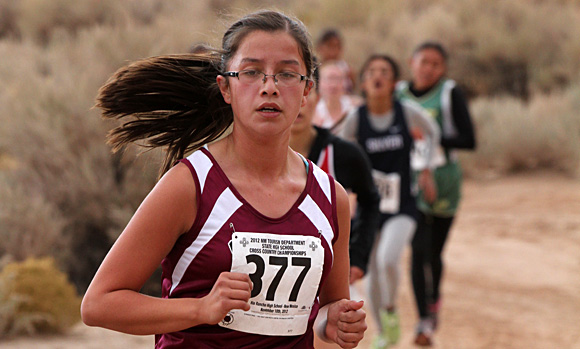 What the 3A races may have given up in glamor to the 4A and 5A races, they more than made up for in competitiveness. These were contests in which you actually had to hang around deep into the races to have a clear picture of who was winning the team battles. 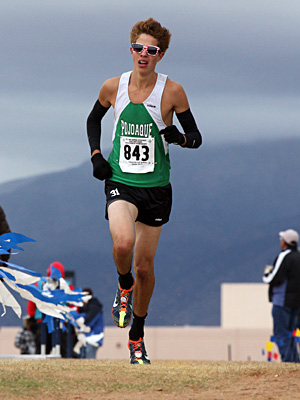 The 3A boys had the earlier start, meaning cooler temperatures and, at least in this classification pairing, stiffer breezes. And, although Jereme Santistevan (photo, left) qualifies as having a high wind profile and a large surface area to body mass ratio by which to enhance the loss of body heat in colder temperatures, none of that seemed to matter much. Santistevan was a young man on a mission, and something as simple as a little wind was not going to get in the way of that.

In fact, Santistevan owned the 3A boys race without dispute from the midway point forward. His margin of 10 seconds at two miles would grow to a healthy 24 seconds as the lanky Elk simply strided away from anyone who tried to stay on his pace. And a few of those who did try to stay on or close to Santistevan's pace, including a couple of his own teammates, suffered some in later stages of the race for little bit of ambition.

Eric Williams of Shiprock, Donevan Gravelle of Taos, and Moises Coca of West Las Vegas did the best of anyone in keeping pace with Santistevan, but Williams' finish of 16:54 was still 24 seconds behind Santistevan.

As a team, Shiprock paid most dearly for the elevated early pace. Shiprock would slip from second to fourth place in the team standings between one mile and the finish. St. Michael's, starting a bit more conservatively, would make take the complementary path, moving from fourth in the team scoring at one mile to a strong second at the end of the race.

Ultimately, however, Pojoaque had too much depth to be overtaken. A 10th for Carlos Trujillo and a 12th for Matthew Herrera simply put Pojoaque in too strong of a position for St. Michael's to overcome late in the race. The St. Michael's effort was paced by a sixth from Marcus Valencia and an eighth from Troy Pacheco. Both Valencia and Pacheco were well outside of the top ten at the mile.

The girls race was also dominated by a single individual, though dominated in a different way. 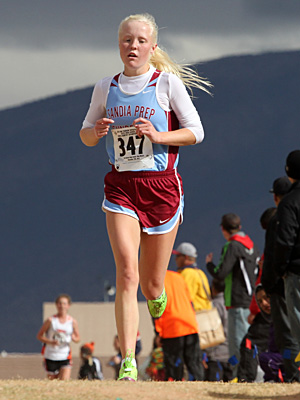 Rachel Fleddermann (photo, right) moved out strongly from the start to take a lead she would never relinquish. Unlike Santistevan, however, Fleddermann was clearly digging deep later in the race simply to maintain the lead she had established in the early going. Megan Herrera of Pojoaque and Haley Rach of Taos kept pressure on Fleddermann almost all the way until the entrance to the stadium before falling to Fleddermann's 19:21 effort.

The girls team race emerged a tight, four-way affair between Shiprock, St. Michael's, Sandia Prep, and Pojoaque even from the earliest stages. By two miles, Pojoaque was starting to fall off the pace as only Megan Herrera was able to maintain the kind of pace she had started with earlier in the race. The other three teams, however, held their positions in the field nicely, and even gaining a place or two here and there.

Little changed in the final mile for Shiprock and Sandia Prep, as both teams gained a small handful of net places while St. Michael's stayed mostly even. The telling difference in Shiprock's final four-point victory was a 25 - 51 advantage at the #5 scoring position. Though claiming three of the top seven places in Rachel Fleddermann, Mari Yepa, and Hanna Grober, the Sundevils were unable to make that early lead stand.