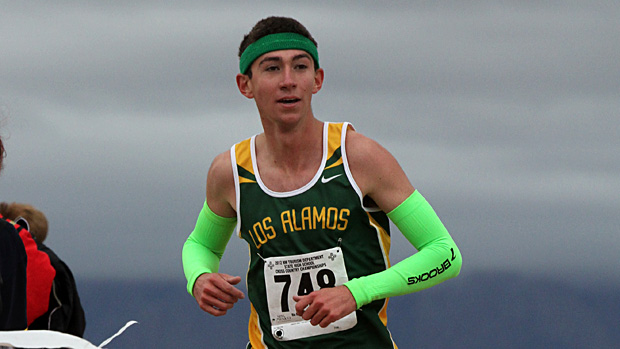 Nick Hill wore the hint of a smile throughout the 4A boys race. Confidence will do that for you. Photo by Alan Versaw.

If you've been around New Mexico 4A cross country for the last 15 or so years, you know two things. First, you know that either Albuquerque Academy or Los Alamos wins. Two, you know the favored team of the two doesn't always win.

So, while you had a pretty good idea which teams the trophy would come down between, you also knew it was worth showing up to watch the race. And, this time the favored team did win. They did it just as they've done it every other time this season. They did it with depth that has no clue where the off button is located. Perhaps the Coaches Hipwood created this monster without an off button?

In any case, it was difficult to miss Los Alamos in the field. There aren't many 4A teams in New Mexico that claim green and gold as their colors, and there was hardly ever anyone in front of the Los Alamos harriers as they came toward you. 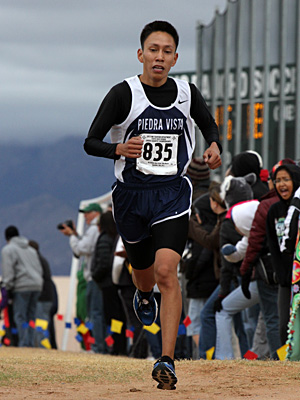 At the first mile, Los Alamos held down the top two places in Sean Reardon and Nick Hill, and none of their top five were any further back than 14th. Scoring the race at the mile, LA had 37 points to 72 for Albuquerque Academy.

The picture had brightened by mile two. By this point in the race, Los Alamos had migrated their top five into the first 11 places and held a 26 - 71 scoring advantage over their long-term (though friendly) rivals from Albuquerque.

Albuquerque Academy did manage to wedge two of their scoring runners with the Los Alamos five, with Kevin Wyss finishing fifth and Blaise Mariner seventh. But the final team tally of 22 - 69, looked a lot like some team tallies from the very best of the AA years. The 2012 Los Alamos team ranks among the very best teams this rivalry has ever produced.

The only singlet of a color other than green or red among the top eight was navy blue and belonged to Piedra Vista. Brandon Levi made his mark on the day with a memorable run of 16:14, helping his team to a solid fourth-place finish. Belen would claim third with 122 points.

And the annual tradition of red and green (photo by Blake Wood):