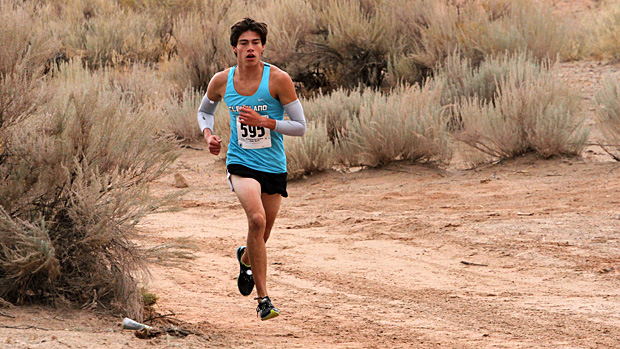 It just might be that Luis Martinez saved his best for the last NMAA-sanctioned cross country race of his career. Photo by Alan Versaw.

Other than the fact it was the day of the state meet, the day had nothing special written all over it. Wind speeds waxed and waned all through the morning, though only intermittently reaching a point where they were strong enough to pick up and redistribute the sand. Barometric pressure remained low throughout the day. It wasn't even close to the kind of conditions that cross country runners put on their Christmas list.

But, when it's state meet day, you show up and run regardless of conditions. It is about the event, not the weather, after all.

The 5A boys race figured to have very little in the way of mystery. Both Luis Martinez and his Cleveland Storm teammates came in as prohibitive favorites. They wasted no time showing how well they deserved that kind of pre-race respect.

Martinez quickly shook away the distractions of competition and soloed his way to one of the finest efforts ever in New Mexico cross country history. Martinez was 4:59 at the mile, 10:08 at two miles, and 15:16 at 3.04 miles. If you're attempting to crunch the numbers at home, I'll spare you the effort. His fastest mile of the day was (easily) his last mile of the day. Nobody came close to shrinking the gap on Martinez late in the race. He was in a gear that only a few ever know.

The team race was over just as quickly. The Cleveland team boasted six of the top 10 at both one mile and two miles. All five scorers--Martinez, Aaron Flores, Jared Mayoral, Dustin Enyeart, and Preston Panana--claimed places among the top eight finishers. The Cleveland team score of 23 points was exactly one-fourth of the total posted by second-place Volcano Vista.

It's worth noting that Volcano Vista had two top-ten finishers in their own right--Joe Clark and Zac Castillo. But nobody brings the #5 guy through like Cleveland.

It was a clinic in domination. A short course in take-no-prisoners. Most races have some element of intrigue to focus on. This race had nothing of the sort. Instead, it had electric blue in black shorts. If you're getting the sense that there's a major dynasty building on the north end of the Albuquerque metro area, a few thousand people have already beaten you to that conclusion.

Seraiah Pineda of Hobbs (16:10) and Preston Charlie of homestanding Rio Rancho (16:18) managed fine races of their own, claiming third and fourth places, respectively, but they were sandwiched between slices of electric blue.

Whatever is was, it was a fitting way to bring a spectacular cross country career to an end. Those who've seen Luis Martinez do his thing aren't likely to soon forget the spectacle.