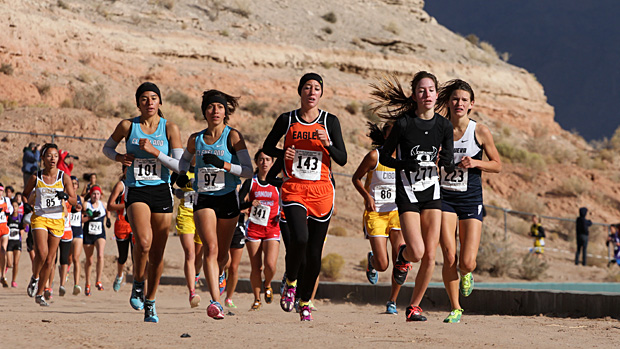 It was still leadership by committee at three-quarters of a mile into the 5A girls race. Photos by Alan Versaw.

Teo Cutter is still young as coaches go. This one will go down in the memory banks as one that nearly got away. That kind of experience can make a coach both older and wiser--in a hurry.

The weather had remained fairly stable throughout the entire day, but it chose the period between the 4A and 5A girls races to take a turn for the dramatic. The clouds that had hung over Rio Rancho parted, exposing most of Rio Rancho to its first sustained rays of sunshine on the day, and the wind suddenly started gusting to the 30 - 40 mile per hour range forecasted at the beginning of the day. Shortly before the start of the race, an unanchored tent in the team camp area lifted, crashed, and went tumbling across the grass, nearly taking out the Eldorado tent in its wake. Nothing good ever comes of a metal-frame tent doing cartwheels across an open area.

And that little episode with the tent was a foreshadowing of what would happen in the race soon to follow. 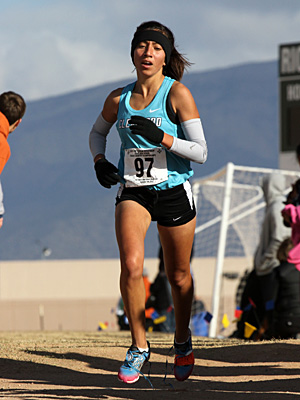 A substantial crowd of runners jockeyed for the lead throughout most of the first mile. Malia Gonzales, the consensus favorite, seemed content to let a variety of challengers expend themselves making bids for the lead. As the field made its wrap-around of the football field, any of Crissey Amberg, Mason Swanson, Meghan Aguilera, Natalie Medina, Cassey Amberg, and Malia Gonzales could have passed as the leader of the race. It was a leadership by committee.

Somewhere around the mile, however, Gonzales had tired of the waiting game and broken free. That would be the last the field would see of Gonzales, as the Cleveland senior (pictured, left) opened an eventual gap of almost 45 seconds on the field despite finishong the race with a pair of untethered shoelaces.

With the individual resolved at an early stage, attention turned swiftly to the team race.

For the Eldorado faithful, nail-biting time arrived with an urgency nobody had anticipated. Meanwhile, you could see the simultaneous look of eager anticipation in the eyes of the Cleveland and, to a lesser degree, La Cueva supporters in the crowd.

Eldorado was keeping their fifth runner ahead of every other team's #3, but by the slimmest of margins. At every checkpoint, the Eldorado lead had the look of a lead that could evaporate in an instant with a serious surge from either Cleveland or La Cueva, though that surge never materialized. In the end, it was a victory, but the margin of victory for Eldorado was substantially smaller than it had been in previous encounters with either of their two main challengers at state.

Nevertheless, a win is a win no matter what the margin, and the Eagle faithful finally exhaled the breath that 10 minutes of anxiety had kept pent up in the lungs. Cassey and Crissey Amberg had done their job at the front. A few places back, Coley Norcross, Lia Stefanovich, and Jessica DePoy held off the masses that had breathed down their backs the entire race. And the Eagles hoisted the only trophy that could have been emblematic of their spectacular season.