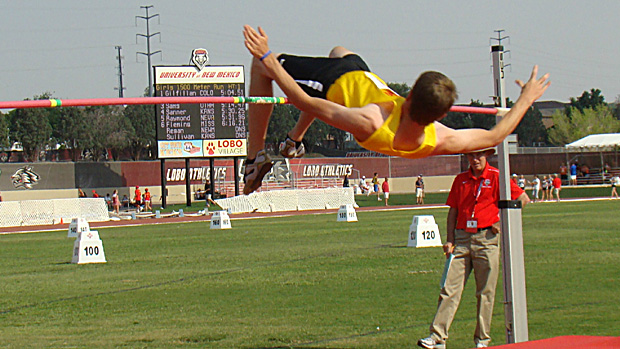 Garrett Stockton gets a clearance en route to going 6-4 to finish third in the high jump. All photos by Michele Bisbee.

Albuquerque's 5000 feet of elevation make the Great Southwest a meet magnet for sprinters.  Particularly on the boys' side, the meet drew big names like Florida’s Arman Hall, Texas’s Abraham Hall and Arizona’s Trae Armstrong. Accordingly, spectators were treated to more than a few sprint showdowns. Probably the most memorable of this year's results was the 45.59 Arman Hall turned in in the 400. But, if you had to stick a tag on a second most memorable performance, the 10.20 (+2.4) by Abraham Hall would probably do very nicely.
Someone, however, forgot to send the memo to the state of Utah that the best performances were to be in the shorter distances.  Utah came to the GSW en masse and with no shortage of distance strength.
From the first gun Friday night, the navy-blue-and-white clad team showed they had not only numbers, but depth of talent as well. Carrie Jube started things out with a first place finish in the 2000m Steeplechase. Teammates Mack Morrison and Jaxon Hansen went 1-2 in the boys version, upsetting the national leader, Nate Moore of Texas.  Missouri won the top boys 4x800 honors, but Utah sported an A, B & C team, placing 2nd (7:46.42), 4th (7:48.72) & 7th.  The girls won their division in 9:10.72. 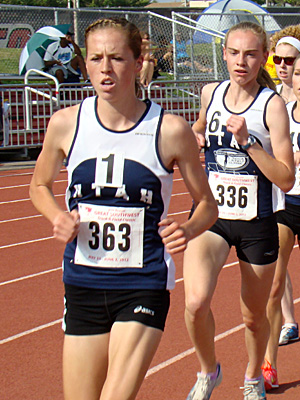 Saturday, would prove even more productive for the Beehive State. Ashleigh Warner (photo, left) would take home gold in the 1500 and two hours later follow with silver in the 800. Sarah Feeny and Ellie Child would also take home 2nd and 4th place medals in the 1500, and Aimee Bryson 5th in the 800. Both races were run in the mid/late afternoon 90’s heat.
Missouri’s Spencer Haik ended up running wire to wire for the 1500 title, but the Utah pack of Paxton Patey, Andrew Brewer, Issac Faux, Austin Brower and Chance Werner nearly ran him down in the final 200 to place 2nd – 6th.
The pace for the boys 3200 started out a bit slow, at least for the group of 19 that stepped up to the starting line. Four laps later, pretty much the whole group was together as the pack leaders crossed at 4:55.  100m later, host state New Mexico’s Zach Castillo got the crowd revved up when he made a significant surge and attempted to run away with the race. He almost was successful, having gapped the field by a significant margin going into the final lap.
With 200 to go, however, Jacob Heslington of Utah made his move, followed by teammates Jerrell Mock, Jordan Cross, and Morrison. Entering the final stretch, the group of blue would catch Castillo. Heslington and Mock were successful in overtaking Castillo. At the finish line, just a little over one second separated first through fourth places. New Mexico’s Jackson Thomas came in 6th, making it an all blue and gold medal stand.
As close as the 3200 was for the boys, the girls’ title was decided without a doubt right from the gun. Utah’s Natalie Shields took off and left the field to figure out who would be second.  As could be expected, that battle ended up being between Utah’s Summer Harper, Emily Rich, Miranda O’Very, and Jube.
For the first half of the race, the second position was in question, but on lap five Harper began putting on distance from the others. To keep with the blue and gold theme, New Mexico’s Jennalee Thurman placed 6th. The golden gals took the next 3 positions as well.
Shields’s impressive win (10:40.42) earned her the 2012 GSW Outstanding Girls Distance Performance.
Utah also got strong performances from Seth Fortin, who bettered his seed time to 10.94 (+1.3)) place 6th in the Open 100. Cole Lambourne equaled his seed time of 47.76 to place 5th in a very stacked 400.
Utah showed significant depth in the boy’s javelin with Skyler Porcaro, Jeff Whittaker, Jeff Rowley and Ryan Peterson taking positions 1, 3, 5, and 6, respectively. With only two placers counting per state, the Utah boys placed 3rd in the team standings and the girls fifth.
The Colorado girls also seemed to miss the memo about this being a headliner boys sprinting meet. Though small in numbers compared to many states in attendance, when a young lady in forest green checked in for her event it was time for other states to take notice.
Again, everything started on Friday night with the steeplechase as Kristi Oslund placed third in a close finish.
In the 4x200, the foursome of Taylor Buschy, Kailey Fuchs, Stephanie Tuder and Kaylee Packham won their heat in 1:38.94 to place 4th overall. The top three teams had faced off in a different heat, begging the ‘what if’ question…
Day two seemed to build on the previous night. Packham just missed the podium in the 100 hurdles, her heat having been run into a 2.2 headwind, whereas in the following heat swirling winds produced a 1.2 push. Packham came back to finish 5th in the 300 hurdles.
The big sprint performance though for the Colorado girls came in the 100. Due to the breeze for the most part hampering performances in the short hurdles, the direction for the 100s was changed to run away from the traditional starting line rather than towards it.
Sierra Williams was slated for lane 8 of the 7th of 7 heats of the Open 100 (not the Elite 100). With the change of direction, she started her race instead in lane one. As we all know, the fastest seeds run from the middle, so it was a complete surprise when Williams blasted down the track not only winning the Open 100 event, but demolishing her personal best and lowering her time to 11.69 (+1.5).
That time would have placed her second in the Elite 100. Zainab Sanni also placed 6th in the Open 100.  Unfortunately, we didn’t get to see Williams for the remainder of the meet as she was icing what looked to be a tender hamstring afterwards.
Since we are talking about the Elite 100, the photo, I am sure, had to be investigated to determine second and third places as both Mary Beth Sant and Missouri’s Tianna Valentine clocked 11.77 (2.7). Sant was just edged out for second.
There were several athlete additions and scratches in events, changing up a number of heats/sections. Sanni was scheduled for the Elite 200, but ended up running in the open 200 heats instead. Her efforts earned her a spot on the podium with a fourth place finish.
Buschy ran the 400 in 57.16 and earned a bronze medal. Tabor Scholl did double duty on a hot day for distance events and placed 3rd in the 1500, followed by a 6th in the 800, both times very close to her personal bests. 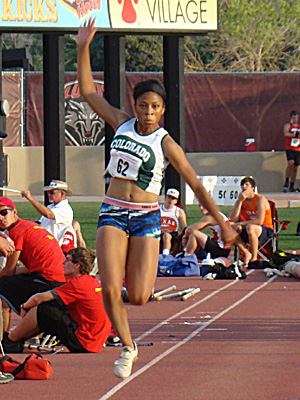 Colorado’s second trip to the top of the podium happened later on Saturday evening. Triple jumping 40-2.25 (1.5), Danielle Williams (photo, right) outdistanced a strong Missouri contingent.
In the pole vault, Addy Neibauer came within .25 of an inch of her best going into the meet.  Her 11-11.75 performance had her standing on the podium as well with a 5th place medal, but her better vault of 12-1 came in Thursday's decathlon competition.
The final event of the night, of course, was the 4x400. The aforementioned foursome of Fuchs, Tuder, Buschy and Packham stepped onto the track in the second of two heats.  They faced a talented Missouri team, a young, but talented, Texas team and in the previous heat Arizona had run a strong race.
In the relay events for the GSW, most of the teams are made up of state ‘all-stars’, runners from different schools running together for their state team.  Colorado fans know that the team that stepped onto the track for the 4x4, although definitely an ‘all-star’ team, also had the distinction of all attending Loveland High School.
The Loveland girls took the lead from the beginning, building a lead of almost 40 meters. The final leg for Missouri did close the gap, but the final result was never in question. The Loveland, Colorado, team finished first in what was announced as a school record time of 3:48.34.
Overall the Colorado girls placed third in the state rankings.
The Colorado boys only sported a meager handful of athletes with some athletes on the heat sheets that were not there and visa versa. Fortunately, those who were there were able to run.
As far as placing goes, Colorado sported a triplet of sixth places, including Taylor Anders in the 2000 Steeplechase (6:33.43), plus Alex Mead placing sixth in both the well-stacked Elite 100 and Elite 200.
While Colorado was lacking in overall numbers of athletes participating, the Land of Enchantment, as the host, had many athletes and, of course, the home crowd behind them.
The aforementioned boys and girls 3200s in the welcome coolness of the evening and under a nearly full moon gave the crowd much to cheer for.
In addition, as the awards podium was getting caught up from the daytime events, there were many golden uniforms to cheer for. 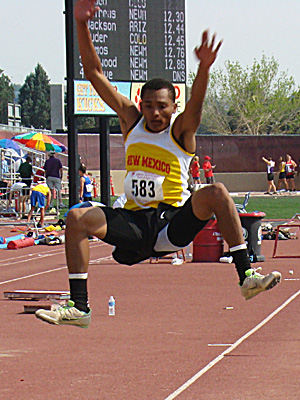 For the boys, Devin Enslen placed 4th in the Open 200. Mustafa Mudada raced to 5th in the 300 hurdles. Ethan Long had a strong finish and an impressive 6:28.15 for 4th place in the steeplechase. In a very competitive 4x200, New Mexico sported two teams placing 4th and 6th. Garrett Stockton took home the bronze in the high jump, matching his PR at 6-4.
Texas and Arizona were interrupted in their sweep of the long jump places by Isaiah Lintz (photo, left) throwing out a PR jump of 23-2.5 (+0.8) for fifth. New Mexico also stepped up for the hammer and javelin throws with a pair of fourths by Zack Munoz and Jason Fitzpatrick.  The boys placed 4th in the state rankings.
For the New Mexico girls, the sophomore pair of Elicia Gallegos and Kyra Mohns placed 5th & 6th in the 400 and later joined up with freshman Tiffany Cano and Junior Kelsi Lewis for 4th in the 4x400 in 3:56.37.  In the open 400, Mohns ran a PR 58.45 and placed from the second of four heats. Jessica Scherrer also put down a PR of 43.59 in the 300 hurdles for a surprise 2nd. Regina Okoye placed 5th in the triple jump. Okoye had a busy few days as she also competed in the heptathlon, taking home bronze. Caroline Kaufman won silver in the steeplechase in her first attempt at the event. Akuadasua Enzenyilimba (possibly the most difficult name in the entire meet to spell or pronounce) placed sixth in a very competitive discus event.
The New Mexico girls placed 5th in the state rankings.
Complete Results
Tweets by