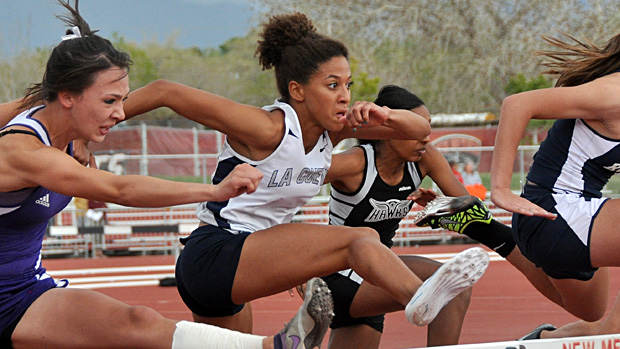 Kaylin Martin was one of the meets biggest winners, dominating both the 100 and 300 hurdles. Photo by Blake Wood. 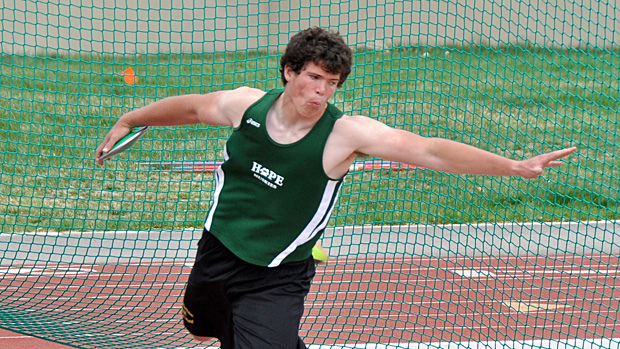 Not only did Jonathan Millar win the shot put and discus, but he gets style points for having a singlet that coordinates with his implement and with the UNM discus cage netting. Photo by Blake Wood.

The Marilyn Sepulveda Meet of Champions is an individual invitation track and field meet held annually at the University of New Mexico Track and Field complex in Albuquerque.  Appropriately for its name, participation in the meet is limited, by design, to the best of the best from the state of NM.  For one Monday afternoon in April, a relay-less track meet is compacted to single heats and flights, and opportunities for participation are offered only to those in the upper echelon of track and field performers.  Perhaps the best way to describe the event is as a showcase - a showcase of the brightest stars that the state has to offer.

Monday was a story of star power.  The day was defined, predictably, by some of the most recognizable athletes that the sport has to offer.  It is one of the most entertaining meets of the season in large part because of the sheer star power of the athletes who attend.
For instance, AJ Beach, a Sandia Preparatory middle distance star, looks enough like his older brother, Curtis (Duke University multi-event legend) to trigger flashbacks (and perhaps nightmares for some opposing coaches) when he warms up.  On the track however, Beach the younger doesn’t need his famous surname to be successful.  His time of 2:03.43 in the 800m run placed him squarely in the thick of the race and left little doubt in anyone’s mind that he will contend for the state title in the event in his school’s 3A classification.
The earliest superstar to make her mark on the afternoon was Eldorado senior Gina Okoye.  Okoye, in the twilight of her track and field career (she has signed to play college basketball next year at Weber State University), has achieved a level of fame throughout her four years on the scene with an abundance of athletic talent – she is among the most versatile athletes that New Mexico has to offer.   At one point or another, she has competed in just about every event outside of the pole vault.  For instance, last weekend, her lifetime debut in the 100m hurdles yielded a dominating victory and a state qualifying time.
At Sepulveda, her event slate was the jumps.  Okoye’s first attempt in the triple jump gave her a lead that she would never relinquish, but it was her second jump that will be remembered (for at least another year).  At 39 feet even, Okoye added almost five inches to the meet record with what was easily the best jump in the state so far this season.  Second place went to Alexis Wright from Hobbs (37’ 4.5”) with Virginia Norwood from Alamogordo taking home the bronze (34’5”).
Shortly after, Los Alamos senior Chase Easley started off her evening in style, winning the shot put by more than six feet (43’0.5”) over Jenae Wolfram of Valencia (36’ 8.25”).
As dominant as Easley iss in the shot, she is perhaps better known for her work in the ever visible short sprints, where she is arguably the class of the state at the 100m distance.  With the 100 also near the beginning of the meet, Easley’s warm ups for the two events (in two very different areas) were actually concurrent – alternating practice throws with strides on the track.  The quick turnaround didn’t seem to faze her at all, as she completed the double-victory with a convincing win over Krista Armstead (Sandia Prep – another competitor with ample star power) by a margin of 12.29 to 12.38.
Perhaps no new star arrived on the scene with the same seismic reading as Bloomfield senior Seth Booker.  Booker was an easy winner early in the 110 hurdles with a time of 14.55, and made it a double with a narrow win in the 300 hurdles (39.16) over Mac Shoaf of Alamogordo (39.31) and Mustafa Mudada (30.40).  The 300’s were one of the most exciting events as Mudada absolutely flew over the first few hurdles, but lost his accumulated lead in the final meters.
Speaking of dramatic finishes, if you enjoy exciting conclusions, look no further than the boys’ 400m dash.  That was the event where Chris Kline from West Mesa held off a late charge from Kyton Jurney of Las Cruces (49.57 to 49.63) by literally falling across the finish line faster.  Kline needed a hand to stand back up after both boys stumbled while lunging for the line.
In an unusual occurrence, the boys distance events belonged to someone other than Luis Martinez.  Although he was present in the stands (visible even as a spectator – talk about star power), Martinez, the state’s top distance runner, wore a t-shirt and jeans while Del Norte’s Jackson Thomas enjoyed a day in the sun.  Thomas was an NXN national finalist last fall, so his abilities were never in doubt.  Regardless, his one-day 1600/3200 double victory over an invitational field was extremely impressive.  4:30.85 and 9:45.29 were the winning marks.
Team scores are kept at the Sepulveda Meet of Champions, although no team awards are presented.  Additionally, with a small field that spans multiple classifications, it is difficult to read much into any team implications of the meet.  However, there was at least one memorable moment that could potentially carry weight in the grand scheme of things.
The girls’ 800m run was won by Amber Saiz from Belen, a 4A school (2:19.95).  However, it was the race for second in that field that could potentially have an impact down the road.  Crissie Amberg from Eldorado (2:21.60) edged Hattie Schunk of La Cueva (2:22.02).  Both of them compete in the 5A classifications for contending teams and run important events (400, 800, and relays).  Interestingly, it was Schunk whose aggressive racing style defined the race, but it was Amberg who had just enough to get ahead at the end.  Make a note of the proximity of the two athletes to each other – it’s highly unlikely to be the last time it happens, and future such races could mean a great deal in the grand scheme of things.
Tweets by