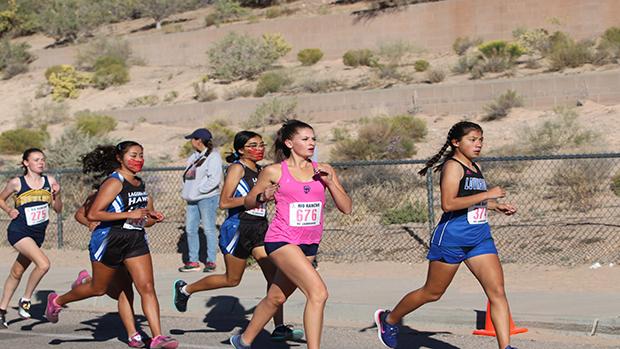 The biggest meet of the regular season returns in spectacular fashion this weekend with the Rio Rancho Jamboree set for September 25th. It's not a stretch to say that practically all New Mexico schools will be in attendance to tackle one of the more diverse terrains in the state. You can check out the full list of teams entered to compete this weekend here. All the heavy hitters will be in this race including teams boasting talented boys and girls programs like Los Alamos, ABQ Academy, Volcano Vista, Sue Cleveland, Cottonwood Classical, and host Rio Rancho. Starting with the girls' championship race at 9:00 we will see teams competing across classifications with Los Alamos, ABQ Academy, St.Pius taking on 5A's Rio Rancho, Volcano Vista, Albuquerque high and coming through we get a look at how 3A defending champs Cottonwood Classical will look fare amongst the competition. This race should set the stage for some individual matchups as well with a pack of front runners to separate themselves early on in a course like Rio Rancho. In the team race, we will see the Hilltoppers doing what they do best as we could see the closest finish among 5A schools with Cleveland and Volcano Vista nearly deadlock in terms of performances midway through the season. The girls team race will also include Los Alamos and ABQ Academy in a race of their own while Rio Rancho, Volcano Vista and Eldorado will be a great matchup to see for 5A schools. We will be looking to see how the Storm competes as both boys and girls squads seek to reload from this past year's departures.

We are confident Leah Futey will be making her way to the front of the pack early on as we suspect familiar faces like Norissa Valdez, Delaney Ulrich to be near. La Cueva's Ariana Thiel-Hadjilambrinos has emerged onto the scene along with Albuquerque's Daniela Figueroa and Carysa Marquez as youngsters ready to shine.  The boys will include Dawson Gunn attempting to get the win on his home course as he enters this meet with a 15:45 season-best just behind Los Alamos Keith Bridge (15:35). The other sub-16-minute performers that will be in the chase include Sandia's Steven West and Tucker Scott who are coming off a good race at APS Invitational.  Others to be on the look out for include ABQ Academy's Joaquin Deprez, Eldorado's Naseem Dhaouadi, and Cleveland's Caden Nunn and Cody Toya. Varsity races consisting of smaller schools certainly won't be a cake with Academy for Tech and the Classics, Bosque Schools, Hope Christian, Crownpoint, Laguna Acoma, Sandia Prep, Tohatchi, and Pecos among them. We will see how defending champs will look as well as upcoming teams that just missed out on the podium this spring get another go at it to raise some hardware this season. This will be the first and only look we have at schools from certain regions of New Mexico and what better way to show their progress amongst the competition than the extravaganza that is Jamboree.ATC girls will try to make their claim for yet another title run heading into this fall. Bosque School will also be looking for quality performance as they attempt to take down other 3A contenders. Other schools toeing the startline in this race include Navajo Pine, Quemado, McCurdy, Pine Hill, Mesa Vista, and much more to come for varsity boys and girls races.

Santa Fe Prep's Joshua Abeyta will be the leading man entering this boys race with a season-best of 17:19 while Espanola Valley's Daniel Sanchez comes in just behind him with a 17:12 to his credit this season. ATC's Joey Gurule will be representing class A/2A well along with Quemado's Noah Bugayong who is coming off a  3rd place finish at the state meet in March. Girls varsity race will include Josette Gurule who finished 2nd at the state meet in March and more recently claimed victory in the 800m and 1600m in the class A state track and field championships. We will get to see how Santa Fe Prep's 8th grader Sophie Bair will do competing in what should be her first race of this magnitude.

Never too early to be looking toward the future as the Jamboree's Junior Varsity and C- Team races will be a great precursor to what a program holds down the road for its possible future starting seven. Be sure to check out photos, interviews, highlight reels from the 2021 Rio Rancho Jamboree right here on MileSplit!

7:00am: Packet Pick-up Begins (in front of Football Field House)

8:00am: C-Teams, Girls and Boys Combined