Rendon Kuykendall after 4A State Victory 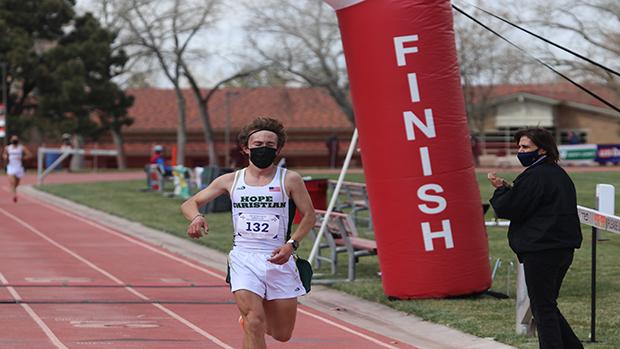 Rendon Kuykendall (photo by Jaren Brooks)
A member of the Hope Christian High National Honor Society, Kuykendall has volunteered locally as part of multiple community service initiatives through his church. "Rendon is a model leader in our program and has been, even as a freshman," said Shane Cleveland, head coach of Hope Christian High. "I can always count on him to be at every single practice rain or shine. We are a blessed staff to have a fine young man such as Rendon in our program."
Kuykendall has maintained a weighted 4.56 GPA in the classroom. He will begin his junior year of high school this fall.
The Gatorade Player of the Year program annually recognizes one winner in the District of Columbia and each of the 50 states that sanction high school football, girls volleyball, boys and girls cross country, boys and girls basketball, boys and girls soccer, baseball, softball, and boys and girls track & field, and awards one National Player of the Year in each sport. The selection process is administered by the Gatorade Player of the Year Selection Committee, which works with top sport-specific experts and a media advisory board of accomplished, veteran prep sports journalists to determine the state winners in each sport.
Kuykendall joins recent Gatorade New Mexico Boys Cross Country Players of the Year Galvin Curley (2019-20, Navajo Pine High School), Kashon Harrison (2018-19 & 2017-18, Kirtland Central High School), and Jordan Lesansee (2016-17, Albuquerque Academy), among the state's list of former award winners.
Through Gatorade's cause marketing platform "Play it Forward," Kuykendall has the opportunity to award a $1,000 grant to a local or national youth sports organization of their choosing. Kuykendall is also eligible to submit a 30- second video explaining why the organization they chose is deserving of one of twelve $10,000 spotlight grants, which will be announced throughout the year. To date, Gatorade Player of the Year winners' grants have totaled more than $2.7 million across 1,117 organizations.
Since the program's inception in 1985, Gatorade Player of the Year award recipients have won hundreds of professional and college championships and many have also turned into pillars in their communities, becoming coaches, business owners, and educators.