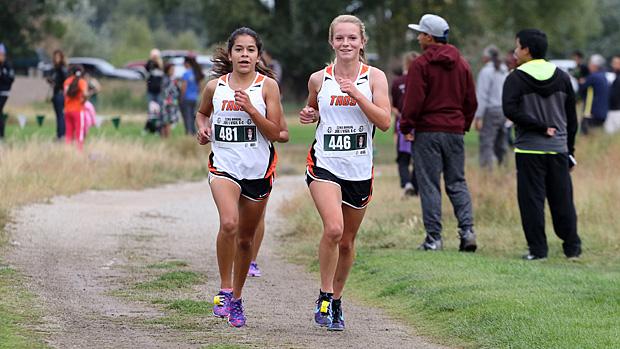 Can the tandem of Elizabeth Reyes and Cora Cannedy keep Taos in the Girls Championship Race title hunt? File photo by Alan Versaw.

The Sub Varsity Races rarely get much attention, but there are some interesting story lines at this race. First of all, East Mountain has two varsity level athletes who are running JV because of the NMAA transfer rule. Abri Wyre and Augustine Montoya (both formally from Estancia) are the heavy favorites to win their respective JV races. Wyre won the Varsity Division last season while Montoya finished 3rd in the boys race. Rumor has it that the C-Team race will see the 2014 XC debut of Jennifer Mueller from Cleveland, who finished in the top 20 in state last year. She is a varsity soccer athlete who could help the Storm close the gap on the crosstown Rams. Speaking of the Rams, their JV boys are undefeated in New Mexico suffering there lone loss to Desert Vista at the Desert Twilight Classic. The Rio Rancho JV girls, also second at the Desert Twilight Classic, have only one loss on the season. Both squads are favored to win the JV division.

With the Pecos and Laguna-Acoma boys bumped up into the Championship Division, look for the top 1-2A individuals to slug it out for the championship. Terrence Lee (Navajo Pine) Antonio Yazzie (Shiprock Northwest), Isaiah Rodarte (Penasco) and Trevor Armijo (Jemez) all look like contenders for the individual title in this race and for the 1-2A crown. They will be joined by Aaron Lee (NACA), James Byker (Rehoboth) and Mathis Quintana (Navajo Prep) who will have a tough time cracking the top 10 in the 3A meet in November because of the depth of Laguna-Acoma and Pecos who could take all of the top 10 spots at state. The team battle should be fought out between Navajo Prep, Rehoboth, and Santa Fe Prep. The top 1-2A team should be Jemez Valley.

All of the top 3A and 1-2A teams are in this race and therefore it serves as a preview for the state championship. The top individuals should come from the 3A division in the form of Alizabeth Williams (ATC), Terri Dailey (L-A) Rhylyn Jones and Jaimey Fastnaucht (Estancia). 1-2A runners like Kiana Chavez (Ramah) and Charlyna Gonzales (Penasco) have a good chance to crack the top 10 but do not expect to challenge for the title. The team battle will be tight. There are five 3A teams that have a shot to win this race and the 3A Championship in November. They are: Navajo Prep, ATC, Laguna-Acoma, Cottonwood Classical Prep and Ramah. The top 1-2A teams are Jemez Valley and Penasco. Both should crack the top 10 and are long shots to crack the top 5.

This race is packed with individuals who have a good shot at making the top 10 in their respective divisions at the State Championships in November. Michael Anzures (Grants) is the favorite to win this race. Look for him to push the early pace and make moves throughout. He is a seasoned veteran who has been in a lot of tough XC and track races. Anzures won the Varsity Division of the Rio Rancho Jamboree last year. The chase pack will include Austin Luttrell (St. Mikes), Manuel Licano (Socorro), Levi Shije (Sandia Prep) and Danny Hickman (Farmington). The team battle is a nice mix of 4A, 5A and 6A teams. Valencia is the favorite. They elected to race down into this division. Expect St. Michael's to battle. This team is a year a way from returning to contention for a 4A podium spot. The ever-improving Atrisco Heritage Academy is viewed by many as a sleeping giant. A win in this race could wake the largest school in the state. Also look for Robertson, Del Norte, Farmington and Espanola Valley to battle for top 5 spots.

The first race of the day has no clear cut favorite. Elizabeth Beltran (Valencia) and Skylar Jones (Cobre) have posted the fastest times of the group. Expect Makayla Quintana (Robertson) and Violet Eklund (St. Michael's) to also have a shot at winning the race. Anabella Miller (Robertson) was 2nd in the Varsity Race at last year's Rio Rancho Jamboree and she can't be counted out. Other contenders include: Catherine Jungmann (Manzano) McKinzey Allee (Farmington), Janai Clayton (St. Michael's) Morgan Diefendorf (Robertson) and Kaitlin Dobesh (St. Michael's).

The team battle should be close between St. Michael's and Robertson, both of whom are contenders for a podium spot in the 4A division in November. Santa Fe High and Valencia should be the next best teams in this race. Also in the mix are Farmington, Aztec, Manzano, Cobre, Grants, and Wingate.

Any discussion of the Championship Individuals must begin with Niles Thomas (Miyamura) who is the defending champion of the Rio Rancho Jamboree and the 5A XC defending state champion, and the Rio Rancho High School Course Record holder. Thomas' 2015 season has been a bumpy road of ups and downs. Most recently he finished 4th at the Zuni Invitational, but no one should count him out on the hills and sand of Rio Rancho. One could use advanced mathematical properties to figure the favorites in this race. Niles Thomas has had numerous battles this year with Jacob Sanchez (Laguna-Acoma) who has traded victories with Michael Tenorio (Santa Fe Indian School) who defeated Andrew Bosquez (Hobbs) at the Santa Fe High Meet. Or you can just say that all of the above runners have an excellent shot at winning the Championship race this year. The runners who do not figure in the mathematical equation of who-beat-whom are Devin Paredes (Rio Rancho) who recently won the APS Metro Championship and Thomas Salas (Onate) who is the reigning 6A 3200m State Champion. Paredes has the "home course advantage," but Salas has won the last two times these runners have faced off. Unfortunately for Thomas, both of those races were on the track and not on the XC Course where Paredes excels. Other individuals to watch include: Alex Hefflefinger (East Mountain), Zach Allen (Rio Rancho), Jericho Cleveland (Volcano Vista), Daniel Acosta (Hobbs), Trevor Amestoy (Rio Rancho), Kashon Harrison (Kirtland Central), Mike Goke (Rio Rancho), Connor Laktasic (Eldorado) and Ryan Sandoval (Pecos).

The Hobbs boys have to be the most interesting team in the meet this year. Last year the Eagles finished a close second to Rio Rancho for the 2014 6A State Championship. Hobbs usually spends most of their season in southern New Mexico and Texas but this year they have changed their travel plans to ready themselves for the altitude and hills of the State Championship Course. The Rio Rancho Jamboree will be the 3rd time that the Eagles have traveled north as Hobbs won the St. Pius X Five Star Meet and the Capital City Invite in impressive fashion. The Rio Rancho Rams enter the meet on a scorching winning streak. The Rio Rancho Varsity Boys have not lost a meet in New Mexico in over a year and a half. Most recently they won the APS Metro Championship by placing 4 runners in the top 10 on a very difficult course. Look for the Rams to run with a chip on their shoulder as the Hobbs Eagles have the top team time in the state entering the meet following their impressive performance at the Odessa Invitational. Look for Cleveland and Eldorado to be gunning for top 3 spots as each has traded victories against each other this season. The Cleveland-Eldorado battle is a classic pack vs. front runners battle as Eldorado sports 2 quality front runners and Cleveland's young pack will deliver a small 1-5 time spread. For many the Laguna-Acoma vs. Pecos battle may be the most interesting match of the day. Last year at the 3A State Championship 1 point and a few seconds determined that Laguna-Acoma was champion. Other teams to watch are: Volcan Vista, Centennial, Shiprock, East Mountain and Piedra Vista

With the defending champion in the girls division graduated, Daangoiina Haven (Ganado) and Amanda Mayoral becomes the favorites. Haven smoked an 18:04 for 12th place at Desert Twilight Classic. While Mayoral (Cleveland) is undefeated in 2015 with big wins at UNM, Cleveland and the APS Metro Championships. Another visitor from Arizona, Chamique Duboise (Window Rock HS) could be in the top 5. Duboise has victories against New Mexico competition with her wins at Zuni, Shiprock, and Window Rock Invites, and she clocked 18:31 at Desert Twilight Classic. Early in the race we should see Arena Lewis (Belen) in the lead. The front running senior has wins at Valencia and Onate and she finished second to Mayoral at UNM. Other Individuals include: Andi Almodovar (Rio Rancho) Renee Baldwin (Onate), Molly Klein (Rio Rancho), Faith Lovato (Cleveland) Reina Paredes (Rio Rancho), Amerhyst Aguirre (Onate) and Sierra Delaware (Rio Rancho).

Rio Rancho is the defending champion of the Championship Division. The Rams top four girls all have the ability to finish in the top 10. Rio Rancho has victories at Cleveland, ATC, Santa Fe High and the APS Metro Championship. Cleveland, Onate and Shiprock look to be give chase. Cleveland and Onate are similar in that they both have 3 excellent front runners and their 4th and 5th runners are improving steadily throughout the season. Shiprock has a solid pack that will utilize a quick spread to score points in a hurry. The Taos Tigers can't be counted out in this race. They were the top New Mexico team at the Nike Southwest Regional and they return a solid nucleus of runners. They will be gunning for Shiprock as both teams are the top teams in the 4A division. Other to teams to look for are: Volcano Vista, La Cueva, Eldorado and Pojoaque.