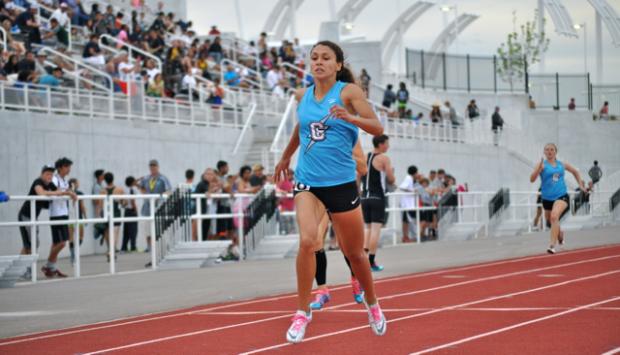 Cleveland's Larimar Rodriguez is a big reason why the Storm are Class 6A favorites at this weekend's 4A-6A Track and Field State Championships. Photo by Rod Stanopiewicz.

Going into Championship Weekend, there have only been two clear cut favorites: the Cimarron Rams in Class 1A, and the Cleveland Lady Storm. Their depth is illustrated in not only their 25 state entrants, but also in the fact that there is a Storm representative in every event save the Javelin. Depth is one thing, the quality of that depth is the real proving point, and the Storm have that quality. With seven top seeds, the Storm are led by Nia Powdrell (200m), Sarah Mackin (100m Hurdles, 300m Hurdles), and Larimar Rodriguez (400m), as well as their 4x100m, 4x200m, and 4x400m relay teams. It is going to take an extraordinary effort in order to subdue the Storm.

The La Cueva Lady Bears are only team with a feasible shot at catching the Storm. With 24 state entrants in every event except the 100m, the Lady Bears will look to match the Storm's every move. The Lady Bear will look to top seeds Alexa Romano (Triple jump), and New Mexico's best female distance runner, Natasha Bernal, to lead the charge. Granted these two will need help from their teammates, and should they receive it, the Lady Bears could weather the Storm.

After the two front runners, it's a toss up between three teams. Lauren Martinez could lead her Eldorado Lady Eagle teammates onto the podium. Or maybe Akeisha Ayanniyi can rally the Lady Demons formidable sprint crew to a trophy in their first year in the largest classification. And all falls into place, it just maybe Keyarha Wilson and Yemisi Oroyinyin leading their Lady Knight teammates into the third place trophy. 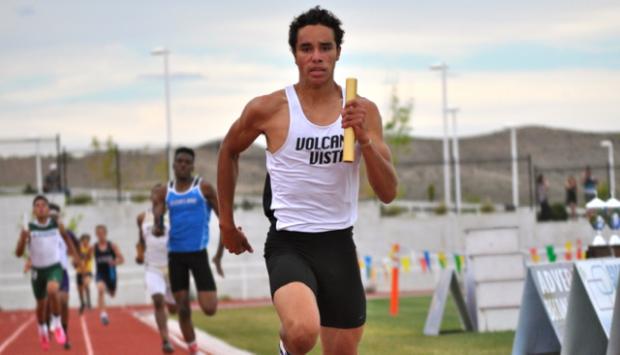 Volcano Vista's Alejandro Goldston and the Hawks Relay Crew hope to finish atop the Class 6A podium at the 4A-6A Track and Field State Championships. Photo by Rod Stanopiewicz.

Similar to the Girls team battle, the Class 6A Boys top spot looks to be decided by two teams.

The Volcano Vista Hawks and their 22 state entrants will be aiming for the blue trophy. Led by their State leading 4x200m relay team, the Hawks will be a handful for anyone.

The Rio Rancho Rams could be up to the task of challenging for the top spot. Led by top seeds Steve Bailey (Javelin), Matt Jackson (Long Jump), Devin Paredes (3200m), Josh Foley (110 Hurdles), and John Finnegan (400m), the Rams are true contenders.

After these two teams, it's anyone's game. Whether it's the Alamogordo Tigers, Juan Pimentel and the Cibola Cougars, the Cleveland Storm joining their counterparts, Jordan Byrd and his Matador teammates, Gilbert Ramirez leading Atrisco Heritage, the Eldorado Eagles, or Gus Swanson and the La Cueva Bears, the battle will be fierce.

However this all plays out, here's hoping for good weather, and fast times. Good luck to all!