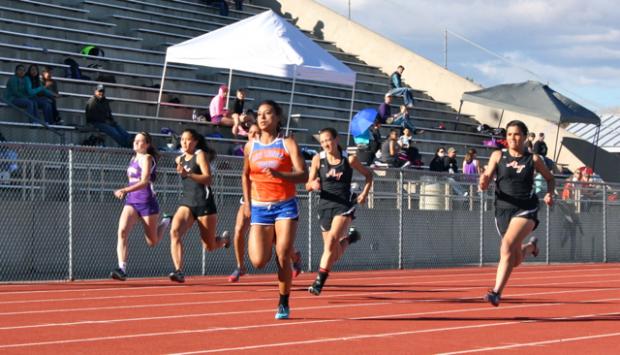 Los Lunas' Alexis Lafave (center) and her Tiger teammates look to runaway from the field in Class 5A at this weekend's 4A-6A Track and Field State Championships. Photo by Holly Patterson.

Three big Cats look to vie for the top of the Girls 5A podium, but one appears to be out in front of the others.

The Los Lunas Lady Tigers come into Championship Weekend as the favorites behind their strong Sprint Crew. Led by 200m top seed Cera Chavez, the Tigers also are the top seed in the 4x200m. The Tigers sprint depth will be on display in every race less than or equal to 400m. With 13 state entrants available to the Lady Tigers, this depth may carry them to the top of the podium.

The two time defending champion Aztec Lady Tiger won't concede without a fight. Led by senior standout and 100m Hurdles, 300m Hurdles, and Long Jump top seed Sarah Root, and Discus top seed Rikki Newland, the Lady Tigers have depth. That depth will be need as the Tigers will be relying on 15 state entrants in their bid to defend their title.

In regards to depth, look no further than the Piedra Vista Lady Panthers. With only Cassandra Crowell's top seed in the Pole Vault, the Panthers rely heavily on their relay crew. And coming off a team runner-up placing in the District 1-5A Meet, the Panthers have what it takes to end up on the podium.

Should any of these three teams falter, four teams will be ready to pounce, who it could be, only the weekend will tell. Perhaps it'll be Triple Jump top seed Elizabeth Lockhart and her Lady Hilltopper teammates. Or maybe Arianna Martinez and her top seed in the High Jump will help her Lady Sartan teammates reach the podium. Should neither of those teams be able to do it, maybe 1600m top seed Carisma Lovato and her Jaguar teammates will he up to task. If not them, the Belen Lady Eagles and Arena Lewis' top seed in the 3200m could get it done. 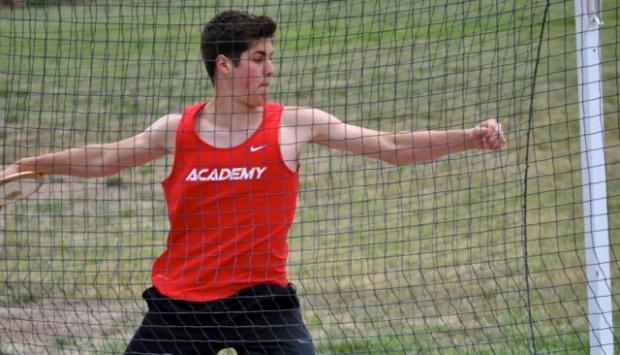 Academy's Jackson Morris will be tough to beat as the top seed in the Discus and Shot Put at this weekend's 4A-6A Track and Field State Championships. Photo by Rod Stanopiewicz.

With depth and quality being musts in two day meets, the Albuquerque Academy Chargers are flush with both as they come into the weekend the favorites.

Boasting 22 state entrants, the Chargers are led by top seeds Nick Slade (110 Hurdles and Triple Jump), Jordan Lesansee (1600m and 3200m), and Jackson Morris (Discus and Shot Put). Teams will be hard pressed to knock off the favorite Chargers.

Potentially up to the task are the Artesia Bulldogs. With 17 state entrants, the Bulldogs will look to Long Jump top seed Travis Wilkinson and their top seeded 4x400m relay team. The Bulldogs will need to be firing on all cylinders in order to make a run at the Chargers.

Four teams could contend for the third spot on the podium, who will be the team to come out on top we'll have to wait and see. It could be Ben Parmoon and Steven Duran leading their fellow Sartan's onto the podium. Or maybe Avery Rasher's efforts will be enough to will his Scorpion teammates into trophy contention. If not them, maybe the deep Lovington Wildcats. And the Los Alamos Hilltoppers can't be counted out.

However this all plays out, hopefully the weather cooperates, but have a long sleeve and umbrella handy. And keep this in mind, don't stand in front of the yellow caution tape. Good luck to all!